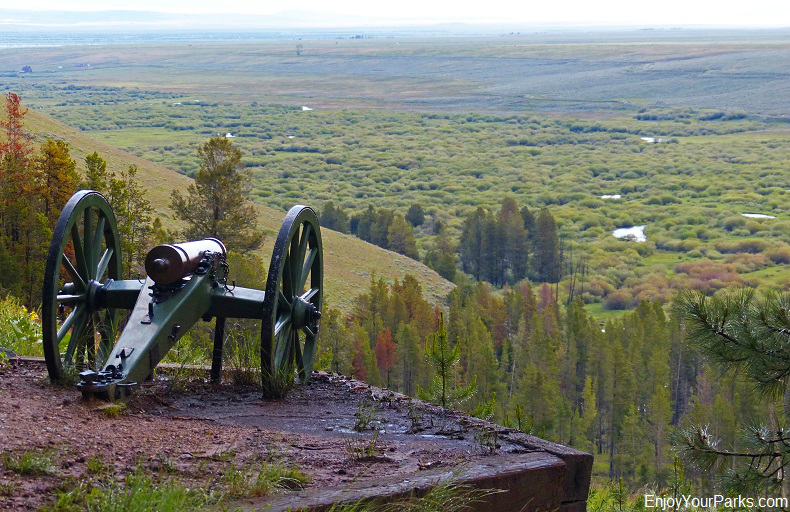 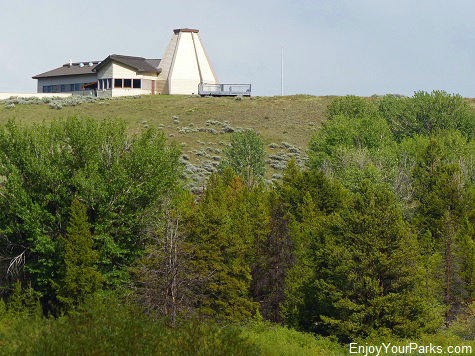 The Big Hole National Battlefield in Southwest Montana was the largest battle ever fought between the U.S. Government and the Nez Perce Indians, and was led by Chief Joseph during the Nez Perce War of 1877. This bloody battle was fought along the banks of the Big Hole River in Southwest Montana on August 9th and 10th of 1887, where 90 Nez Perce Indians and 31 U.S. soldiers lost their lives.

The Nez Perce Indians inhabited a very large territory that included modern day Idaho, Oregon and Washington prior to the U.S. Calvary enforcement of placing Native Americans onto reservations.  In 1873, Chief Joseph, the leader of the Nez Perce signed an agreement with the U.S. Government that guaranteed that his people could stay on their land in the Wallowa Valley in Northeast Oregon, which was originally stipulated in 1855 and 1863 land treaties. 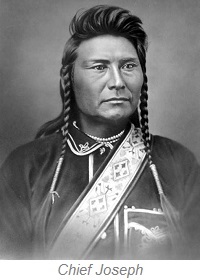 However in 1877 there was a reversal of U.S. Government policy, and General Oliver O. Howard was in charge of relocating the Nez Perce to an Idaho reservation that was much smaller than their original territory. Chief Joseph was not pleased, but begrudgingly agreed.  He and his people then began their long trek to Idaho after saying farewell to their homeland.

On their journey to the Idaho reservation, Chief Joseph learned that three young Nex Perce men had massacred a group of white settlers in response to losing their homeland.  Chief Joseph feared that there would be dire consequences brought on by the U.S. Government as a result of this massacre, which in turn would bring harm to his people.

Chief Joseph therefore felt the best option was to flee to Canada with 800 Nez Perce men, women and children, and to unite with Sitting Bull who was the leader of the Lakota there. Chief Joseph was hopeful he and his people would be treated differently north of the border.  But in response to Chief Joseph's decision to not comply with the U.S. Government relocation policy, the U.S. Calvary was ordered to take action.  What happened next was a bloody encounter that took many lives of both the Nez Perce as well as Infantry Soldiers....

The Morning of the Battle.... 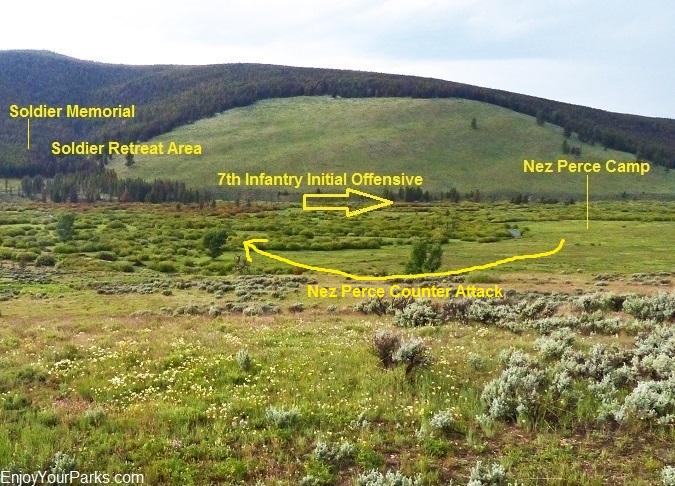 The Big Hole Battlefield as viewed from the Visitor Center. 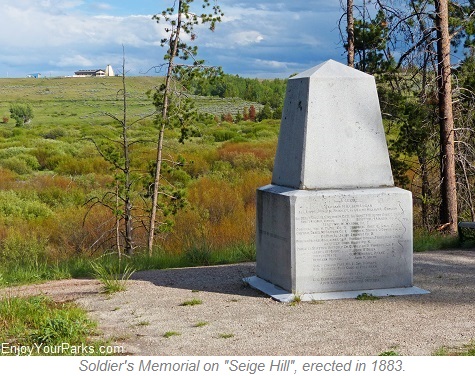 On August 9, 1877, approximately six weeks after the Nez Perce left their Wallowa Valley homeland in Oregon, the U.S. Calvary's 7th Infantry led by Colonel John Gibbon mounted a pre-dawn attack on over 800 Nez Perce men, women and children along the banks of the Big Hole River in Southwest Montana.

The Nez Perce then launched a fierce counter attack and actually cornered soldiers on a hillside known as "Seige Hill", where many of them were killed.

The battle lasted a day and a half, and in the end the Nez Perce lost an estimated 90 men, women and children... but some historians say this number was actually much higher.  The 7th Infantly lost 28 men, along with 40 additional men seriously injured.  There are many bodies buried here. This was without question the most bloody and violent battle between the Nez Perce and the U.S. Government, and will forever be memorialized at the Big Hole National Battlefield. 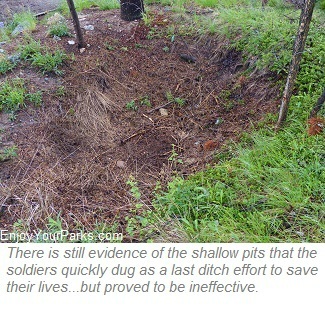 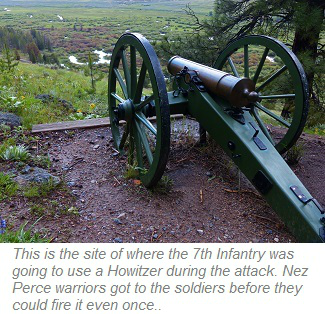 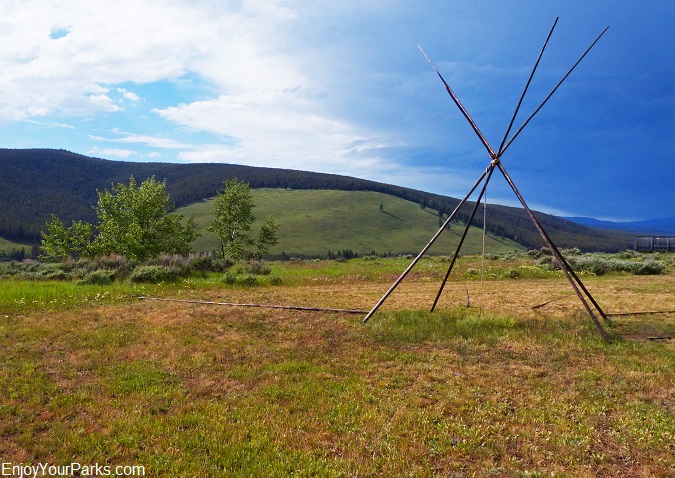 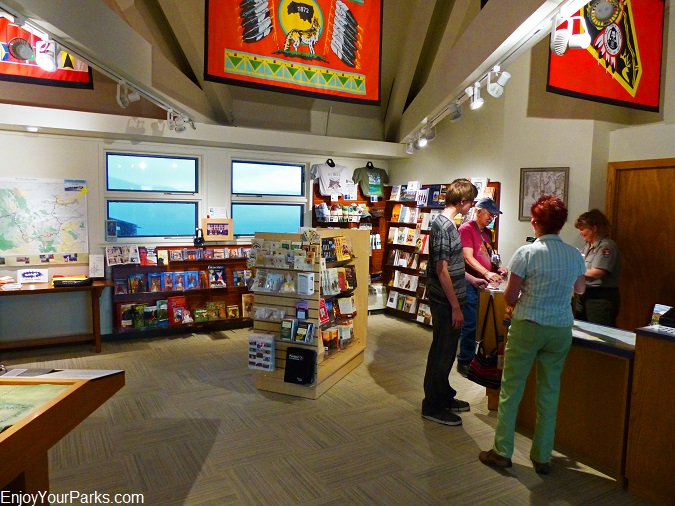 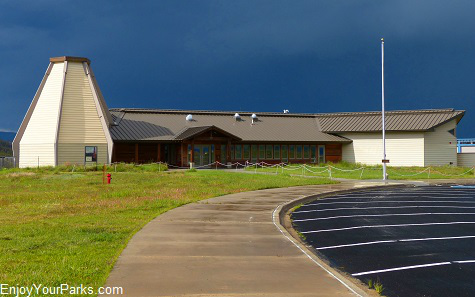 The Big Hole National Battlefield is located 10 miles west of the small town of Wisdom, Montana on State Highway 43.

The park is open year round except for Thanksgiving, Christmas and New Year's Day.  The central hub of the 1,010 acre Big Hole Battlefield is the Visitor Center, which is where all visitors should start their visit at this incredible fascinating battlefield.

There are wonderful displays that explain what happened here, and the knowledgeable and friendly staff will help with and questions you may have. There is also a theater that shows a film about the Big Hole Battle that is top notch, During the summer, there are also Ranger led programs that are very interesting and very well done. 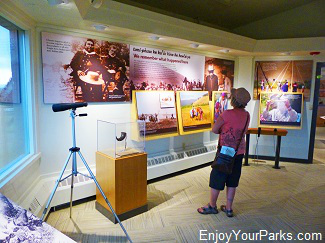 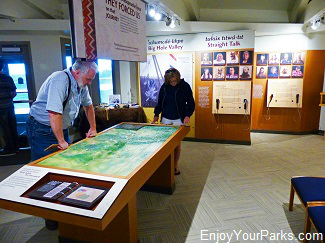 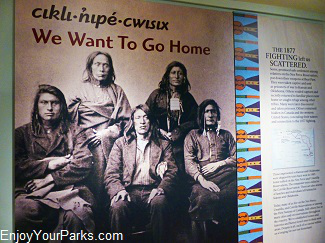 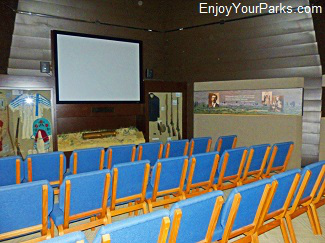 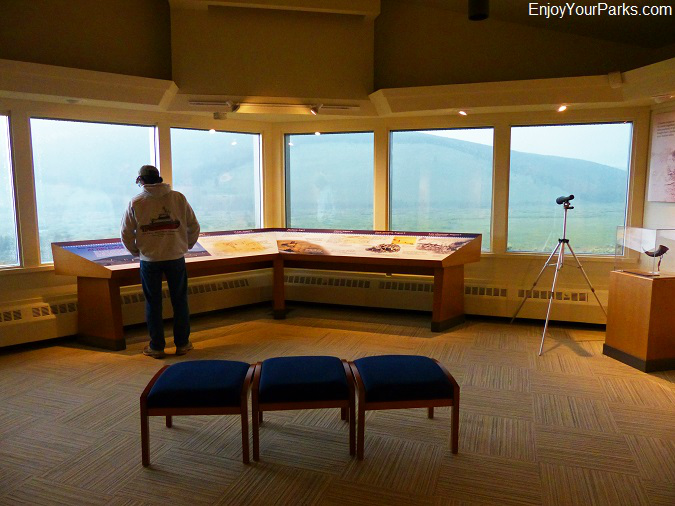 There is an open room that overlooks the Big Hole National Battlefield with large picture windows that does an excellent job in showing you exactly where and what happened during the battle. 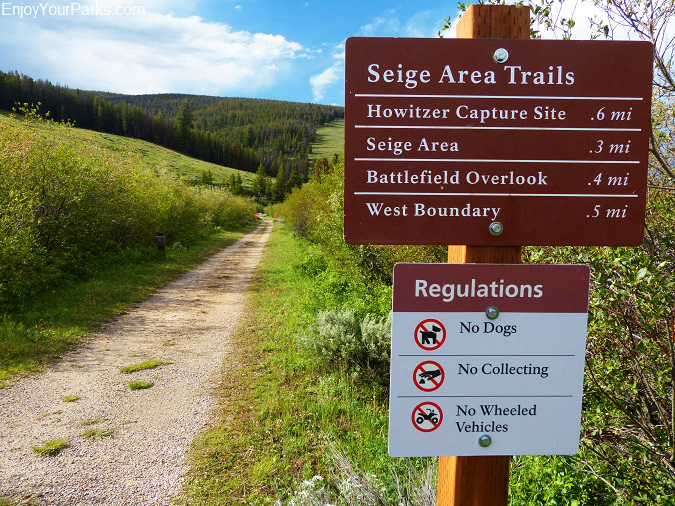 The trailhead to three outstanding self-guided trails in the Seige Area of the Big Hole Battlefield.

There are several absolutely fascinating self-guided trails that take you important locations throughout the park, which include the Seige Area Trail, Howitzer Capture Site Trail and the Nez Perce Camp Trail. We highly recommend that you take these trails so you can somewhat "re-live" this historic battle. 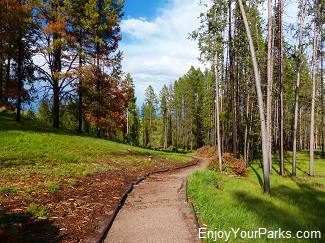 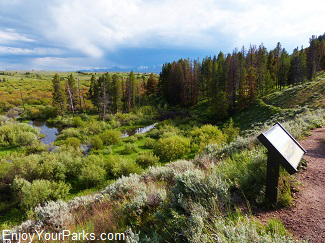 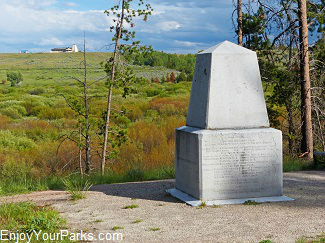 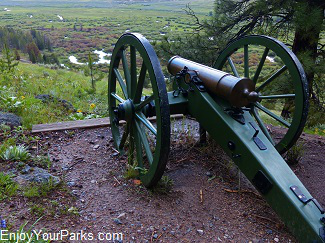 The self-guided trails take you to where all the action was during the Big Hole Battle in Montana.

There are no facilities for overnight camping, but there is a very nice picnic area on the premises that you can enjoy while visiting the Big Hole Battlefield.  There are several campgrounds located nearby, and the Visitor Center staff will provide you this information.

After the Battle....the Journey Toward Canada 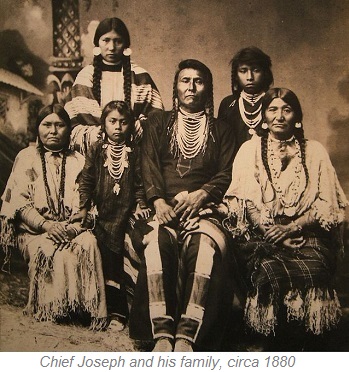 During the Big Hole Battle, hundreds of Nez Perce fled during the fighting, and returned later to properly bury their dead. With Chief Joseph leading, they then fled eastward through Yellowstone Park (which was established 5 years earlier in 1872), and then proceeded to head north through Montana to reach Canada in hopes of gaining asylum.

On October 5, 1877, the U.S. Calvary once again led an attack on the nearly 800 Nez Perce near the Bear Paw Mountains in northern Montana.  This bloody five day battle known as the Bear Paw Battle, ended badly for the Nez Perce, as it marked the surrender of the Nez Perce after their hard fought three month 1,170 mile journey.  By this time the Nez Perce were starving, exhausted and weak, and most of the top warriors were by then killed. Chief Joseph knew it was over, and spoke these immortal words, "Hear me, my chiefs!  I am tired.  My heart is sick and sad. From where the sun now stands I will fight no more forever."  They were only 40 miles from Canada. 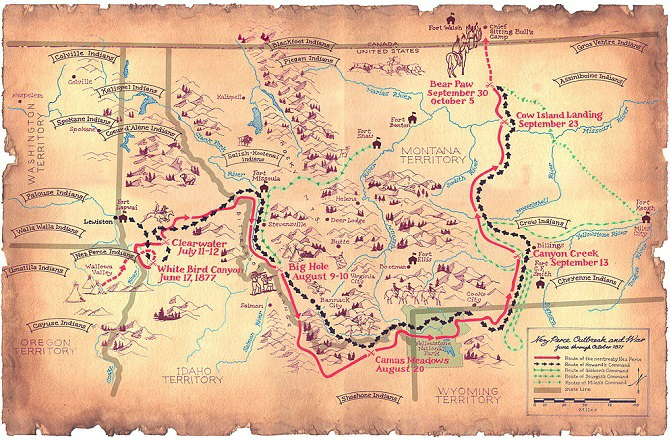 Throughout this 1,170 chase, General Oliver O. Howard was extremely impressed with Chief Joseph's ability to elude the army as well as his skills in battle.  General Howard considered Chief Joseph to be a "genius of engagement", and gained great respect for the embattled Chief of the Nez Perce during the Nez Perce War of 1877. 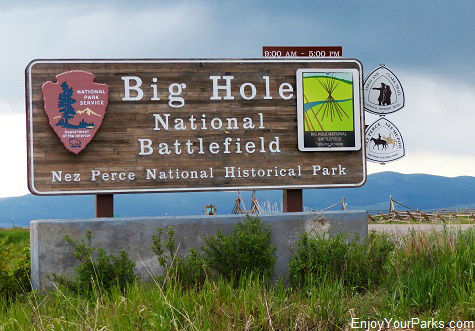 Established in 1965, the Nez Perce Historic Park is spread out over Oregon, Washington, Montana and Idaho, and follows the route of the 1877 conflict.

The Nez Perce, led by Chief Joseph, traveled 1,170 miles in the attempt to elude the 7th Infantry under the command of General Oliver O. Howard.

The Big Hole National Battlefield and the Bear Paw Battlefield in Montana are both part of this federal park.

The Spalding Visitor Center is the information center for the Nez Perce National Historic Park, and is located 11 miles east of Lewiston, Idaho on U.S. Highway 95. 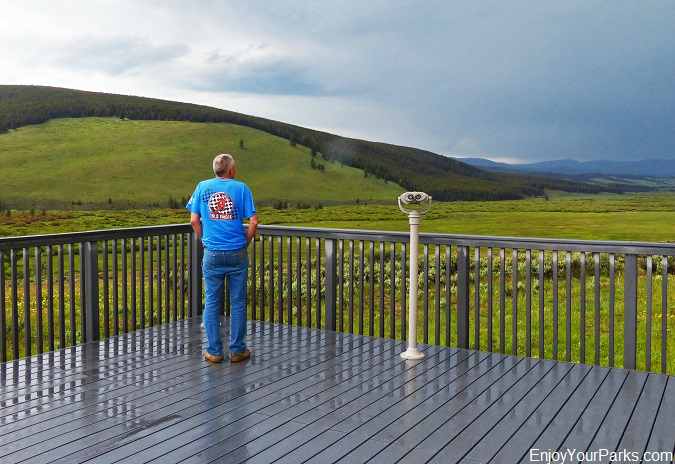 Visitor reflecting on what took place at the Big Hole Battlefield from the deck of the Visitor Center. 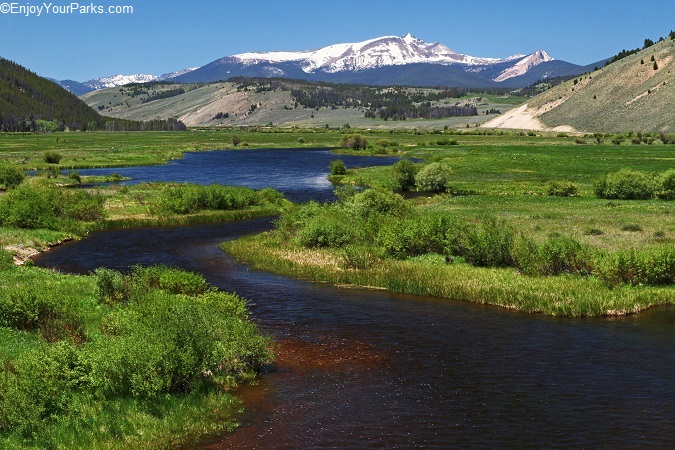 Top Things To Do In Montana: Big Hole National Battlefield 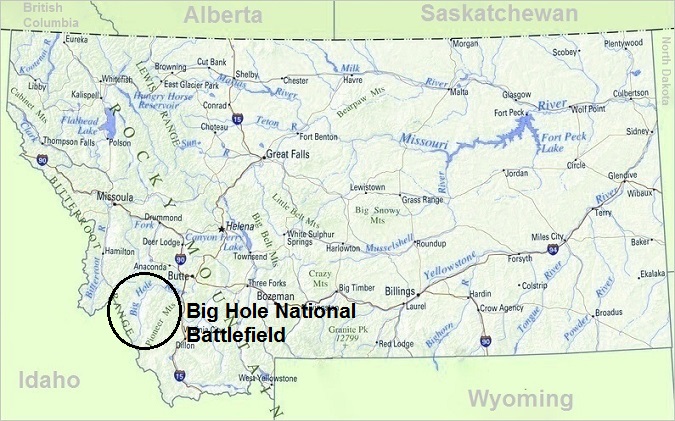