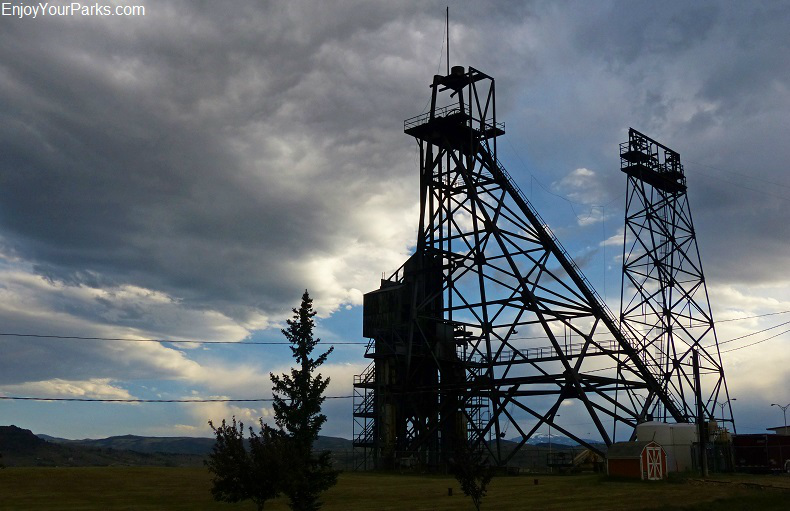 Butte Montana is so rich in colorful history that we could create an entire website devoted it, and even with the most ambitious attempt, we would still only scratch the surface.  So what we need to say "right out of the gate" is this page is simply designed to give you an idea of what we recommend that you and your family see and do while visiting this incredibly historic city... and we will keep the focus on the Butte Historic District.  And by the way, The Butte National Historic Landmark District is the largest National Historic Landmark District in the United States, having close to 6,000 historic buildings within its confines. 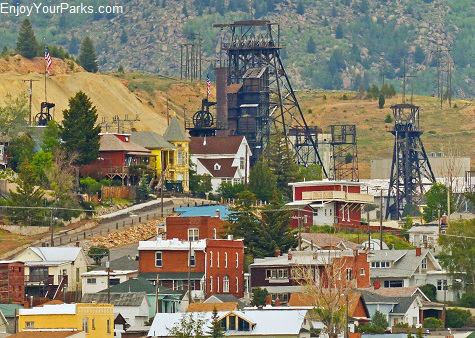 Towering above the homes of Butte Montana are 14 huge "Headframes".  These headframes, also known as "Gallows Frames" stand directly above the old abandoned mine shafts of the past boom town days of the late 1800's.  During the "War of the Copper Kings", these giant iron headframes hoisted cables that lowered miners to their daily work, as well as transported equipment, supplies and mules down the shafts, and of course brought up the millions of pounds of ore.  These headframes still dot the skyline of Butte, and are constant reminders of the unbelievable past that forged this unique town.

"The Richest Hill On Earth" 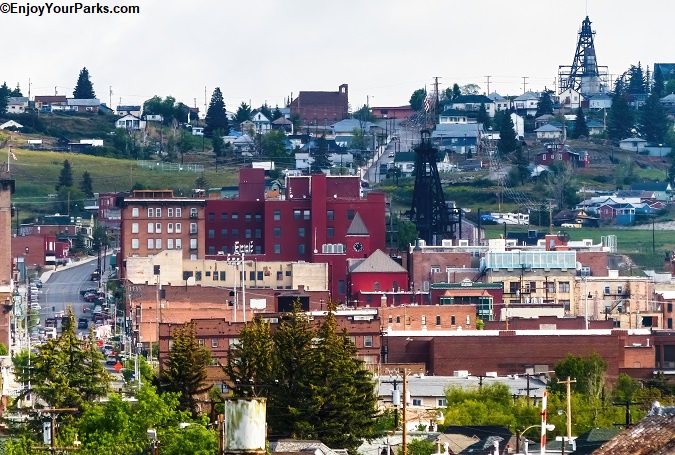 Mining Headframes dot the skyline of the Butte Historic District and are constant reminders of the illustrious history of this fascinating city. 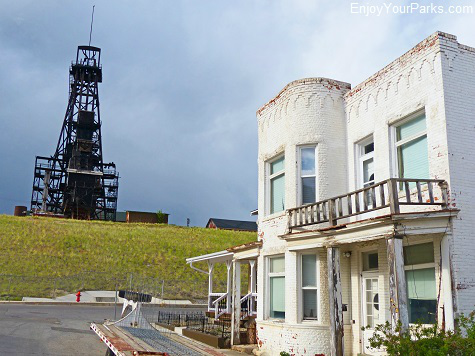 As you begin to discover and explore Butte's Historic District, you will become nearly overwhelmed with what went on in this famous mining town.  From its humble beginnings as a mining camp for prospectors in search of gold and silver in the late 1800's, to becoming the largest city between the Mississippi River and the west coast in 1890... even larger than Denver, Colorado, as copper mining became king.  Butte Montana became known as "The Richest Hill On Earth", and the history of how this all unfolded is incredibly fascinating.

As Butte became a major "boom town" in the 1880's and 1890's, major structures such as banks and hotels were built throughout uptown Butte, as well as hundreds of lavish homes. And what is so unique to Butte, Montana is that the underground mining operations occurred underneath the town!  There are over 10,000 miles of abandoned mine shafts and tunnels underneath the city of Butte still to this day, and intermixed throughout the historic homes, hotels and bank buildings, are the skeletons of giant metal towers that mark the entrances to this abandoned underground mines.

Brief History of Butte's Mining Past: War of the Copper Kings 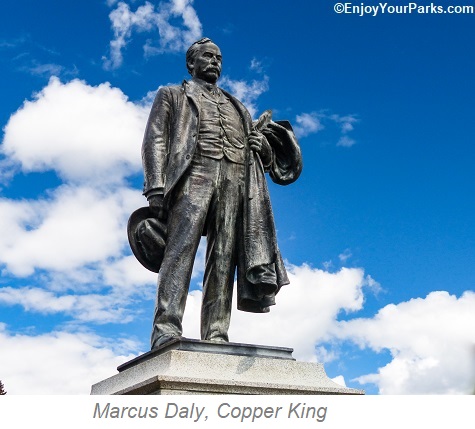 Known throughout the world at one time as "The Richest Hill On Earth", the mining operations in Butte began with prospectors panning for gold and silver in the 1860's during the height of the Montana Gold Rush.  But in time, gold and silver gave way to a much more lucrative metal: Copper. The entire hill that rested under the town of Butte was basically copper, and because copper was in huge demand throughout the world at that time due to the expansion of electricity, Butte quickly became the copper capitol of the world.   The copper was extracted by underground mine shafts that were diligently being dug underneath the town of Butte.  Immigrants from all over the world were flocking to Butte to work in this mines.

"War of the Copper Kings"
In the late 1870's, Butte was becoming a huge copper mining center, and two men were leading the charge. Marcus Daly and W. A. Clark were competing tycoons, and each owned about half of the copper rights.  Their fierce competition between one another became legendary, as their pursuits above and below ground became known as "The War of the Copper Kings".   And adding on top of this fierce rivalry, another "Copper King" appeared onto the scene by the name of F. Augustus Heinze, things really heated up on the Richest Hill On Earth! 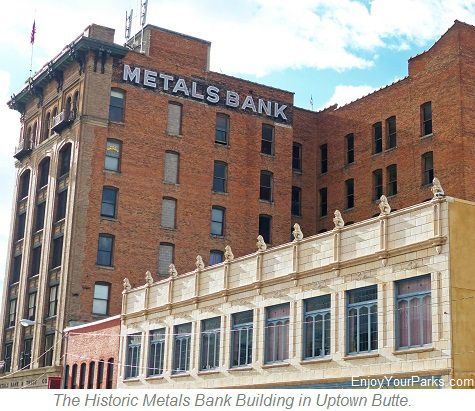 The Richest Hill On Earth....Literally!
To give you an idea of what unfolded underneath the streets of Butte regarding copper production, in 1882, the "hill" produced 9 million pounds of copper. Then in 1883, production exploded by over 250%.  By 1884 there were four huge smelters in operation, and Daly was at the time building what was to be the world's largest metallurgical plant thirty miles to the west at Anaconda, Montana.  Then by 1896, just a 5 square mile section of the earth was producing 210 million pounds of copper a year!  This was over 25% of the world's copper supply and over 50% of the United States'.  Over 8,000 men worked these mines, with a payroll equivalent to nearly 44 million a month in 2015 dollars!   Because gold and silver was mixed in with the copper, these metals were also being extracted at the tune of over 500 million dollars a year in  today's dollar... and this was just a side line operation! 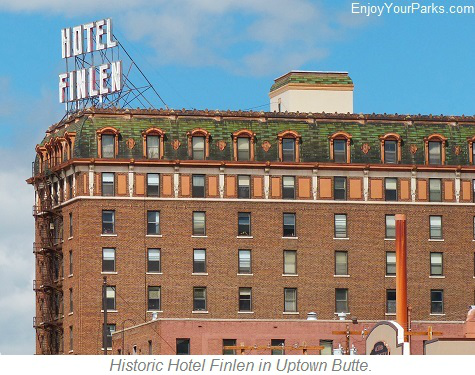 In the early 1890's, Butte became the largest city between the Mississippi River and the West Coast, as it was larger than even Denver, Colorado at that time.  Butte was the center of the west, without even a close second.  20,000 people lived in Butte at that time, and words cannot describe what unfolded in this
illustrious boom town during this period... From the mining to the social dynamics to the crime and justice system growing pains...and the unbelievable amount of money that was flowing through this mining town... one can only imagine.

There were actual physical "battles" between the workers of rival companies, both above ground and below.  By the way, there are countless books that do a fantastic job describing the history of Butte during this fascinating period, and we highly recommend that you take a look at these important documentations of history.  Two that come to mind are, "The War of the Copper Kings" by Glasscock, and "Copper King at War" by McNelis. 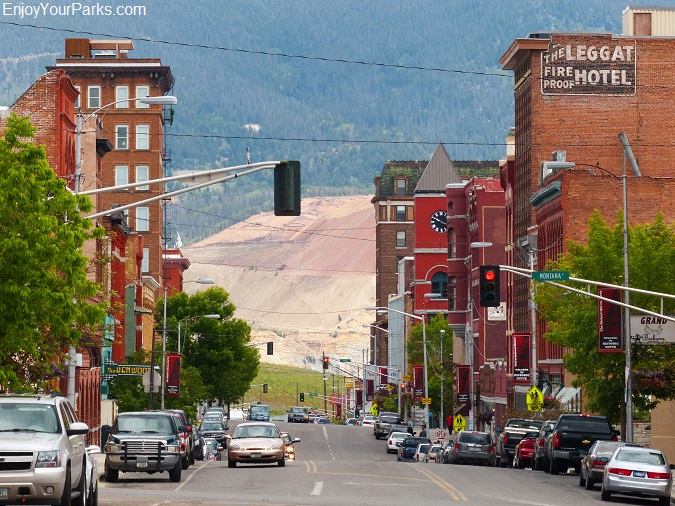 A section of the Uptown Butte Historic District. 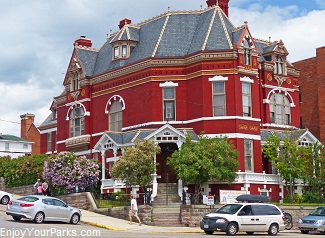 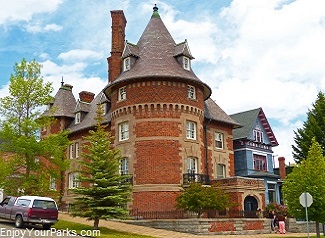 "Don't Stop In America, Go Straight To Butte!"
And to make this illustrious history even more fascinating, the influx of immigrants to Butte really made a huge impact on what went on in this town during the boom years.  The saying at Ellis Island in New York regarding U.S. immigrants during this time was, "Don't stop in America, go straight to Butte!"  And they indeed did.  Thousands of immigrants poured in from all directions, including Ireland, England, Italy, Wales, Lebanon, Canada, Finland, Austria, China, Mexico, Croatia and countless other nations.  These immigrants all worked in the mines, and above ground they would remain fairly isolated, staying together in their own sections of town. 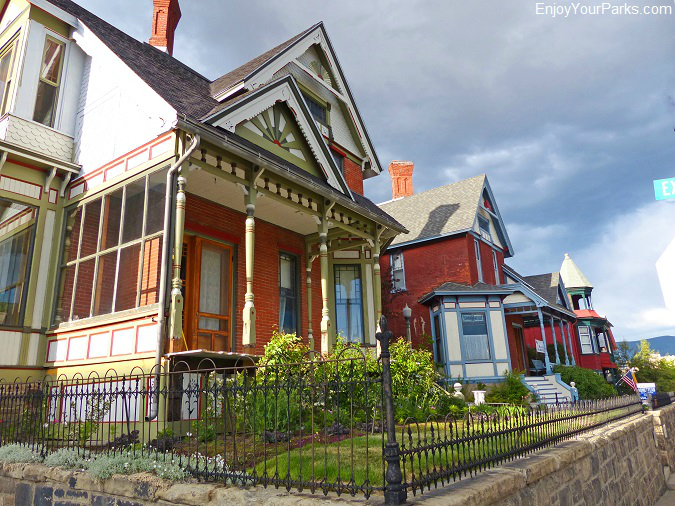 There are literally block after block of old boom town homes that are all listed in the National Register of Historic Places in the Butte National Historic Landmark District. 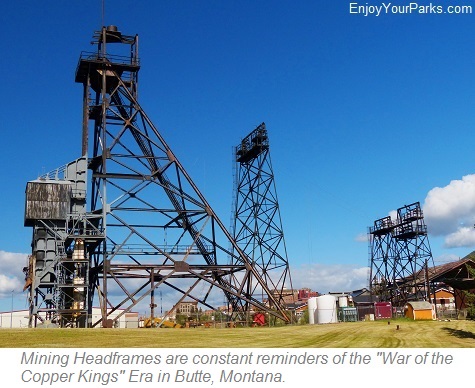 Once the "War of the Copper Kings" began to cool down, the mining interests of Daly, Clark and Heinze morphed into a gigantic company by the name of Anaconda Copper Mining Company.  And between the 1890's and 1930's, Butte became known as "The Gibraltar of Unionism", as unions began to gain in strength and popularity.

Butte was also constantly at the cutting edge of mining and smelting technology, and underground copper mining remained King.

By 1920, Butte reached it's peak population of 60,000 people, and over 10,000 miles of underground mine shafts were now underneath the streets, some reaching 4,000 feet underneath the surface of the earth.  And all this dangerous mining was not without cost.  Between 1870 and 1983, over 2,500 men lost their lives in Butte mining accidents. 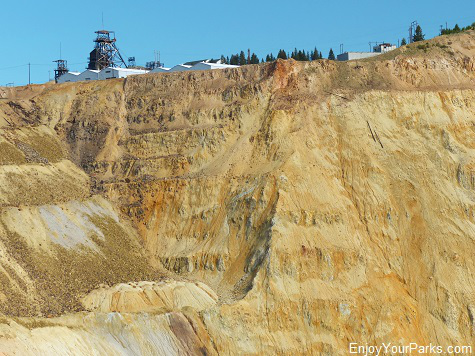 After World War II, the Anaconda Copper Mining Company begin what was known as "The Greater Butte Project".  This involved the beginning of a new phase of mining in Butte: Open Pit Mining.

By 1958, the world famous Berkeley Pit became the major mine in Butte.  This gigantic open pit was nearly 1,800 feet deep and over a mile long and a half mile wide.

The Berkeley Pit became so large that three neighborhoods were gobbled up in the process.  This gigantic pit operated from 1955 until its closure in 1982. After the pit was closed, water pumps in the nearby hard rock mines were turned off, and the pit began to slowly fill up with water.  The water is now 900 feet deep in the pit, almost reaching the natural ground water level.  It has 150 feet to go. 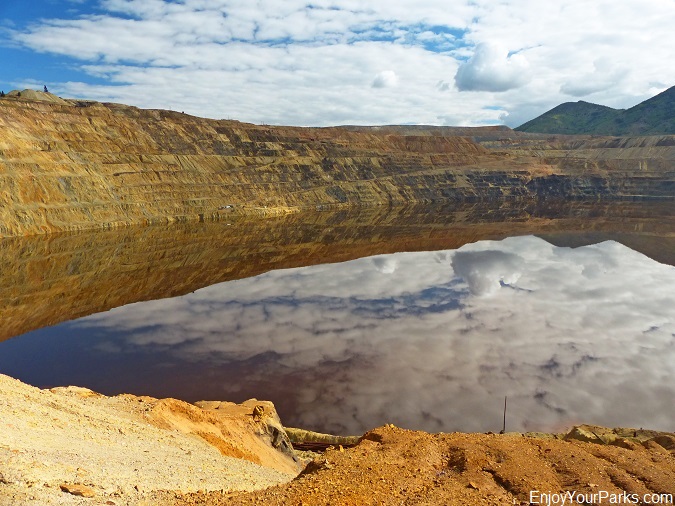 This is a view from the Berkeley Pit Observation Deck.  This abandoned open mine copper pit is now filling with ground water.  The water is about 900 feet deep at this time (2015) and is about 150 feet from reaching the area's ground water level.  The Berkeley Pit was once 1,800 feet deep, one mile long and a half mile wide. 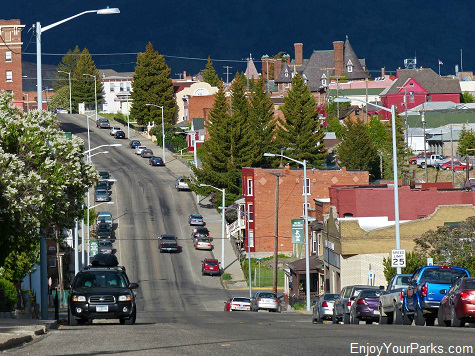 Butte and its copper operations then began to struggle due to many factors that occurred to the Anaconda Copper Company's foreign mine investments and the changing demands of copper around the world.  In 1983, all mining operations in Butte had ceased.  All that remained is a giant open pit, and skeletons of metal towers from the hard rock days of mining.... oh and the 10,000 miles of mines shafts underneath the city.

And all that remained in the neighboring town of Anaconda was the world's tallest smelter smokestack, as the smelter was closed down.

But actually, even though the mining boom has come to an end...the stories, the culture, the history, and the hundreds and hundreds of commercial buildings and homes that are now National Historic Landmarks throughout Butte, and everything else that has made Butte the town that it is today, are all still very much alive and well in this wonderfully unique mining town. 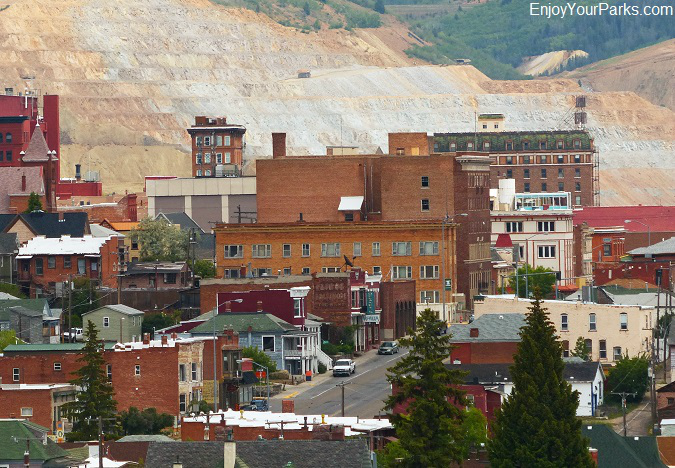 Historic Uptown Butte Montana with the Berkeley Pit in the background. 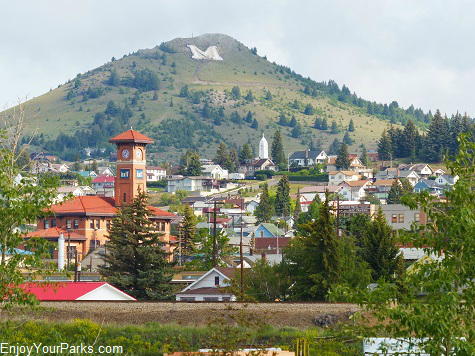 The town of Butte presently has a population of about 34,000 people, and the amazing history of how this town came to be is in each and every one of these Butte inhabitants' DNA.

These locals have an extremely deep pride in being a Butte resident, and many of them have a family history that goes back many generations in the Butte area.  This great American City was born and built through mining, and the toughness of its people still shines through today.

Evel Knievel, one of the greatest and most famous daredevils in history, was born and raised in Butte, which is completely understandable when looking at the rough history of this town. The good folks of Butte work hard, play hard, and will give you the shirt of their back if you needed it.   Butte is an All-American City, and if you ask any resident of Butte, the town is not known as "Butte, Montana", rather its known as "Butte, America".

Butte Chamber of Commerce Visitor Center.  This is where your adventure should begin.

Make sure you put the following on your list as you explore Historic Butte Montana: 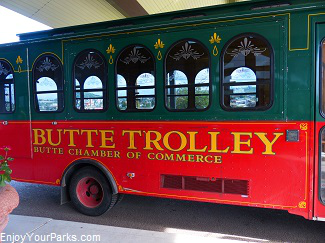 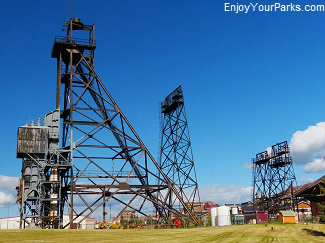 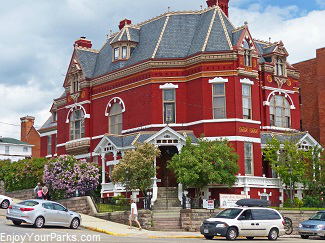 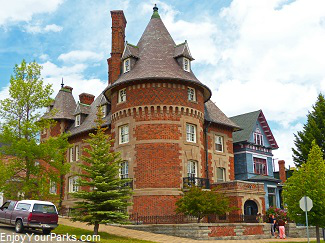 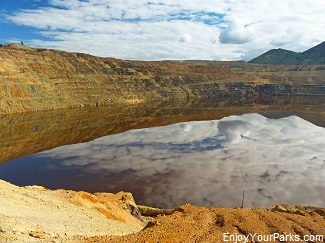 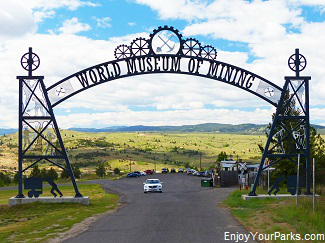 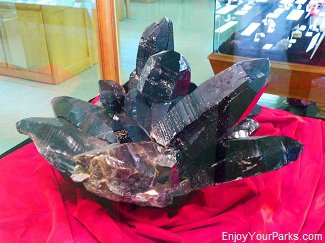 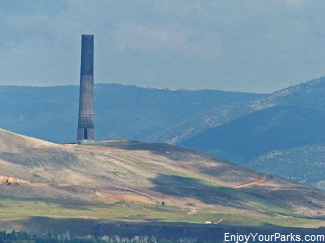 Top Things To Do In Montana: Butte Historic District 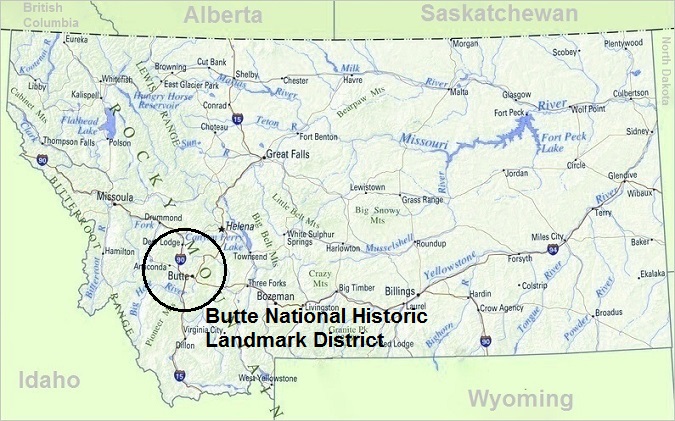