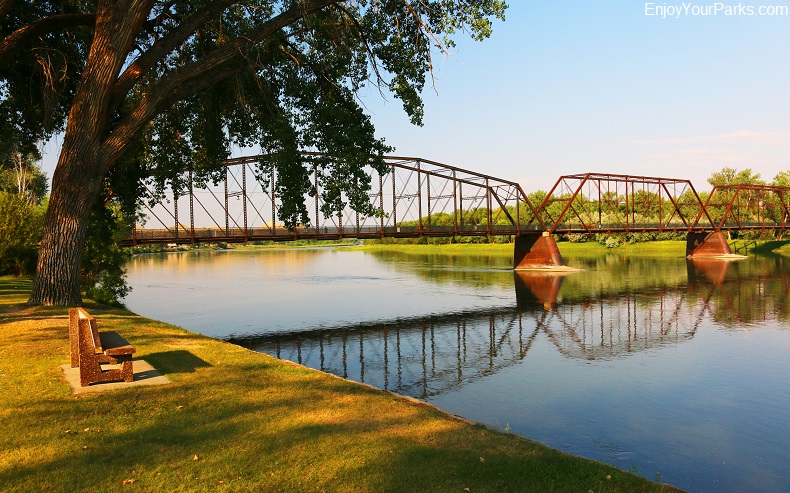 "The Birthplace of Montana" 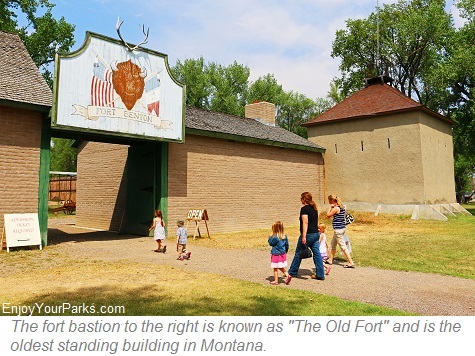 Established in 1846, Fort Benton Montana is one of the oldest settlements in the American West, and is home to the oldest standing building in Montana.  Often called "The Birthplace of Montana", the historic town of Fort Benton rests along the banks of the Missouri River, and during the Steamboat Era was the world's most inland sea port. The Fort Benton National Historic Landmark District is an extremely popular destination for visitors vacationing in Montana due to its incredibly rich and colorful history, and definitely makes our list of the "Top Things To Do In Montana".

So Many Things To See and Do...

There are many things to see and do in Fort Benton, including fascinating museums, the historic district and steamboat levee walk, the historic Fort Benton, the Montana Agricultural Center, the Montana Lewis and Clark Memorial, the Wild and Scenic Upper Missouri River, the Upper Missouri National Monument and much more.  You could easily spend a week in the Fort Benton Area in the attempt to take it all in, and not succeed. There is layer upon layer of history here, and thankfully there are plenty of attractions that help walk you through it all. 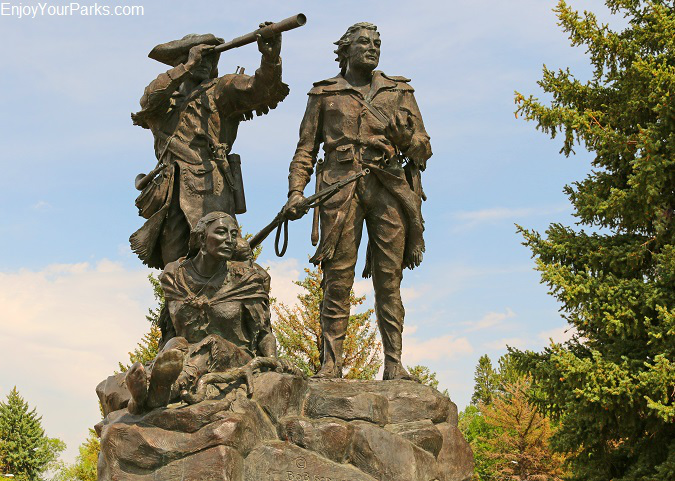 A Brief History of Fort Benton...

European-Americans first laid their eyes on the Fort Benton Area when the Lewis and Clark Expedition made their way up the Missouri River in 1804, but this area was inhabited by Blackfeet Indians of the Northern Plains for hundreds and hundreds of years prior to this historic expedition.  On his way back to St. Louis, Captain Meriweather Lewis boarded his canoe exactly where Fort Benton would be established, and headed downstream on the Missouri River. 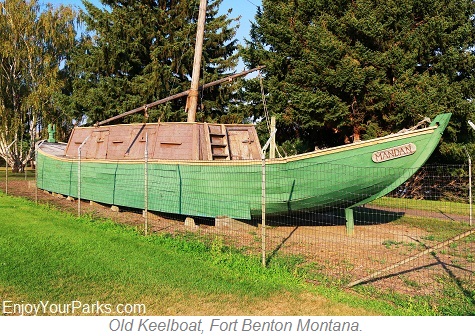 Beginning in 1831, hardy men would literally drag keel boats up the Missouri River for thousands of miles and would build about a dozen trading forts along the Upper Missouri River using extremely basic tools.

These forts were where the incredibly brave and courageous mountain men and fur traders would do business in the untamed and completely wild American West.  Interestingly, there was a harmonious relationship between these early fur traders and Native Americans during this fur trading era, which lasted over 30 years.

Fort Benton was originally established as a fur trading post in 1846 by European-Americans Pierre Chouteau Jr. and Auguste Chouteau, where it soon became a tremendously important economic center due to its most inland location along the Missouri River.  This center of early commerce became what is known today as "The Birthplace of Montana." 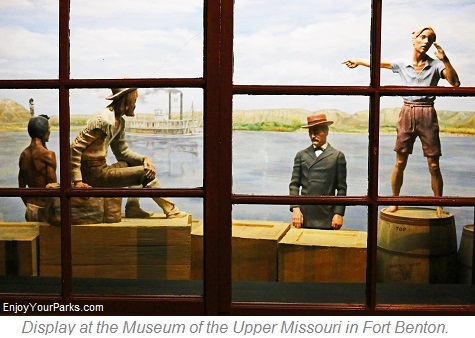 In 1859, everything changed in Fort Benton when the first steamboat, named the Chippewa, arrived to this inland port on the Missouri River.

These large boats carried hundred of people and also heavy equipment used by gold prospectors in Canada and the Walla Walla area of Washington.

GOLD!
When gold was discovered in Grasshopper Creek (Bannack, Montana) in 1862 and then in Alder Gulch (Virginia City, Montana) a year later, the steamboats carried thousands of prospectors, entreprenuers and tons of heavy mining equipment up from St. Louis.  At the peak of the Steamboat Era in 1867, the dock at Fort Benton had 39 Steamboats tied up at the levy! 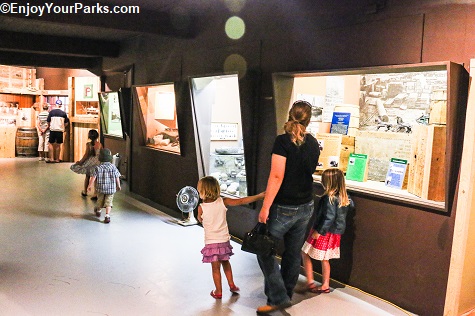 As you can imagine, during the Montana Gold Rush Era, Fort Benton was a colorful place to say the least, with plenty of what you'd picture an Old West Town to be: gunfights, bad guys, vigilantes, saloons, brothels, dance halls... just like a Hollywood movie. Buildings sprang up for well over a mile beyond the original fort during this colorful and rowdy period. For a time, Fort Benton was a very, very tough place, and the only thing that kept any resemblance of "law and order" was through western "vigilante justice".

The Museum of the Upper Missouri River is a wonderful museum in Fort Benton that does a fantastic job displaying, describing and explaining the Steamboat Era, as well as the rest of the incredible history surrounding the Fort Benton Area. We highly recommend that you spend plenty of time in this fascinating museum. 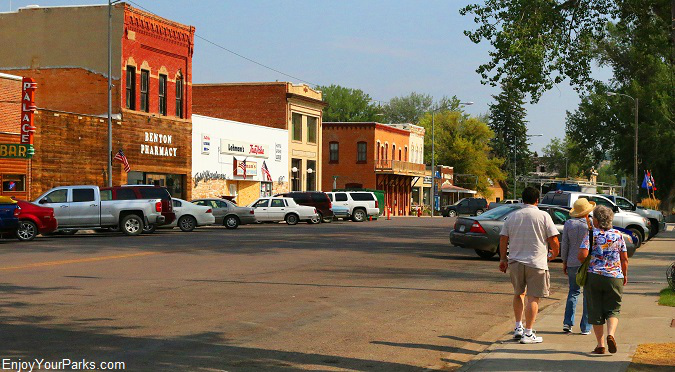 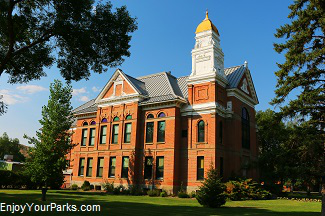 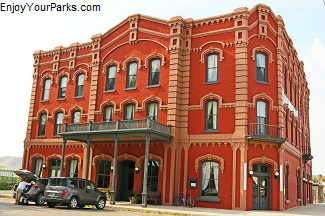 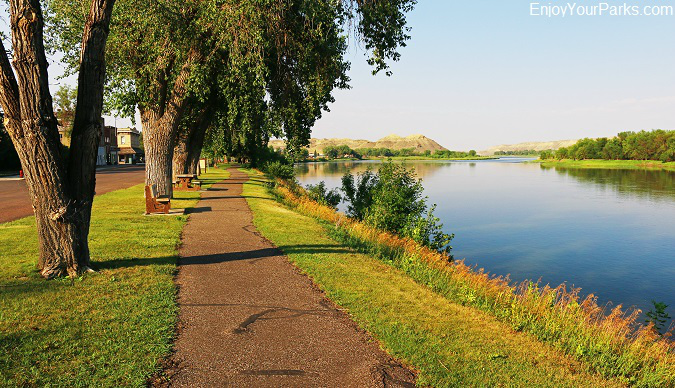 The "Historic River Walk" Self Guided Tour is wonderful.  There are many wonderful displays along this very well done walkway that explains the fantastic history of this historic place.  We highly recommend that you and your family take this historic walk along the Fort Benton Levy. 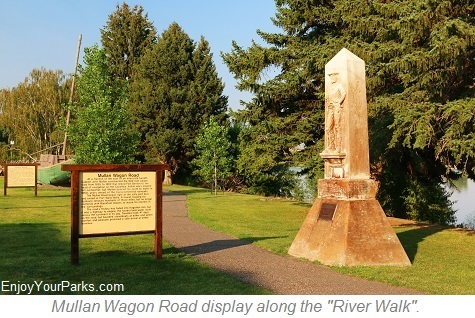 Also in 1860, the first wagon road to cross the Rocky Mountains into the inland of the Pacific Northwest was built by U.S. Army Lieutenant John Mullan.

This critically important 642 mile long wagon road, which originated at Fort Benton, took travelers to Fort Walla Walla in the Washington Territory, and all the many settlements that were cropping up along the way.

The Mullan Road is now followed approximately by the modern-day Interstate 15 and Interstate 90 through what is now present day Montana, Idaho and Washington.  Over twenty thousand migrants used the Mullan Road during its first year alone to get to the gold fields of Canada, Washington, Idaho and Montana, all of them first coming to Fort Benton to begin their journey across the Rockies.

Railroads: The Beginning of the End

In the late 1800's, the "Iron Horse" changed the landscape of the West.  These railroads replaced the steamboats as the primary means of traveling to and from the Great American West, and Fort Benton's "boom days" came to an end.

Click Here for the Google Map Location of Fort Benton

One of the original fort bastions still remains, and is the oldest standing building in Montana as well as a living memorial of the old fur trading days of Fort Benton.  This bastion represents the days when incredibly brave and courageous mountain men and fur traders made this completely untamed area, known today as Montana, to be their home.  It also represents the era when the "white man" and Indian had a favorable, symbiotic relationship. 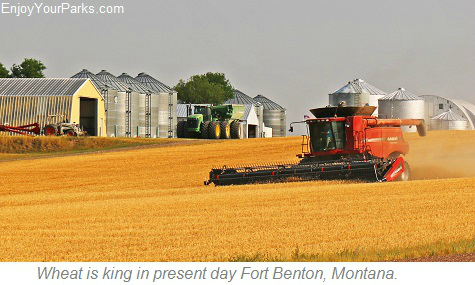 Wheat Capital of Montana
Located in what is called "The Golden Triangle", Fort Benton is presently one of the top centers for wheat farming in Montana, and is one of the highest producers of wheat in the United States.
This is due to the long summer days as it is located on the 48th parallel, and because of its fertile soil due to what is known as the "Elkhorn Volcanics" to the south.

There are presently about 1,500 people living in Fort Benton, all of whom understand and cherish the rich history of this special place, and all of whom have tremendous pride in living in such a historic birthplace of Montana and the Great American West.  The corner bastion of the original fort known as "The Block House" is the oldest standing building in Montana, and is located in the Fort Benton City Park.  What we know to be Montana, all started right here. 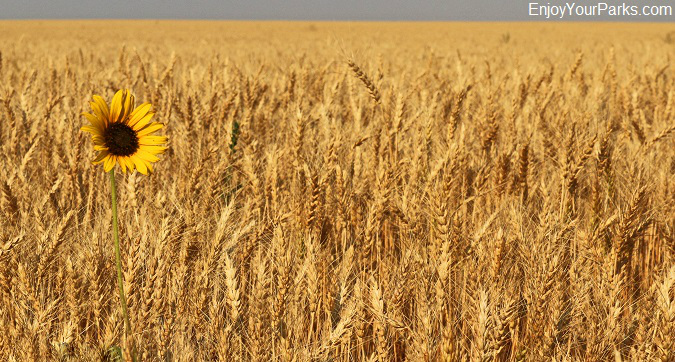 Things To See In and Around Fort Benton...

As we first mentioned at the top of this page, there are many things to see and do in Fort Benton, and below are some of the top attractions of this amazing national treasure that we highly recommend that you take the time to explore and discover during your time here... 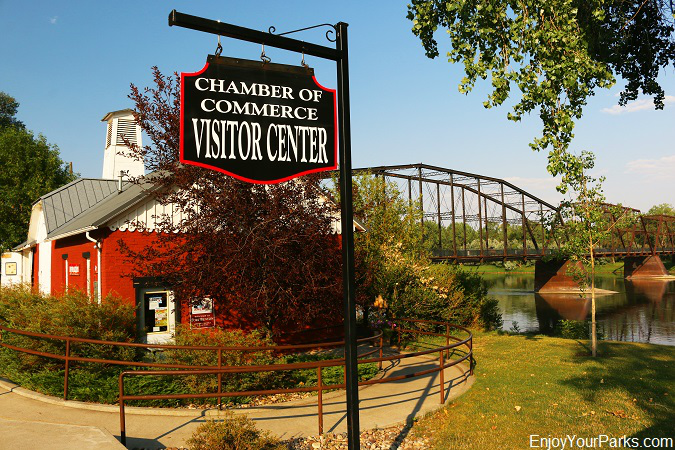 The moment you enter Fort Benton, head straight for the Chamber of Commerce Visitor Center on main street. The staff will help show you EXACTLY where to go and what to do in Historic Fort Benton.  This is where you can also get a ticket that allows you to visit ALL of the museums in town for one low price! 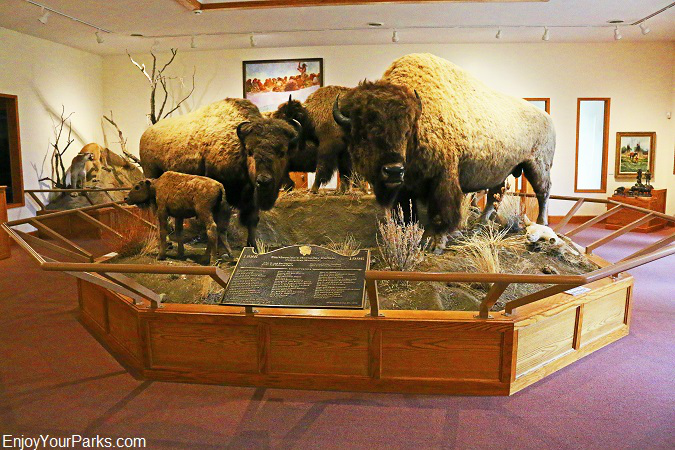 The Hornaday Smithsonian Buffalo Collection is felt by many historians to be the most significant collection of the American Buffalo in the world.  These animals were collected in 1886 by William T. Hornaday for the National Museum in Washington D.C.  They were taken from the last of the wild herd found between the Yellowstone River and Missouri River.  This was also the location of the last Blackfoot Indian hunt in history (1879) before they were forced onto the reservation.  The large bull buffalo was the model for the Buffalo Nickel, the Great Seal of the Department of the Interior and the National Park Service badge. This incredible collection is located at the Montana Agricultural Museum in Fort Benton Montana.

The Montana Agricultural Museum: Definitely a "Must Do!" 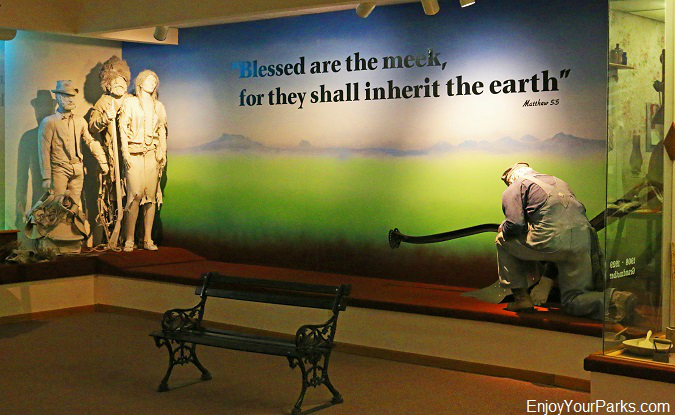 The Montana Agricultural Center and Museum is absolutely remarkable and a "Must Do" while visiting Fort Benton.  We give it a solid "Two Thumbs Up!"  We were quite shocked at the quality and the extent of this remarkable collection and historical unfolding of the farmers and ranchers of the Northern Great Plains of Montana. 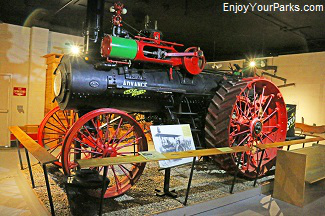 You will be amazed at the Montana Agricultural Museum. 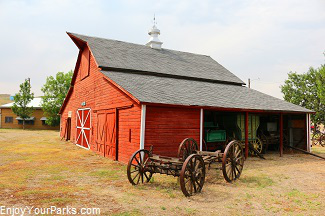 If you like history and great displays, you'll love this museum. 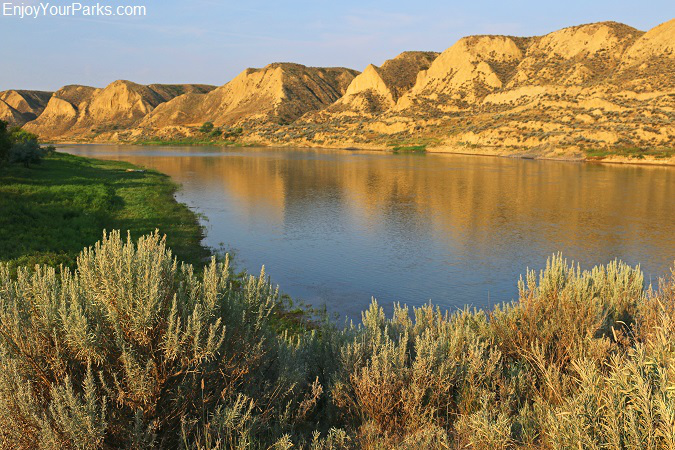 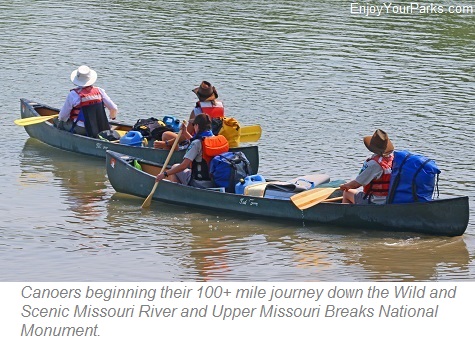 In addition to its rich and colorful history, Fort Benton also serves as the gateway to the Wild and Scenic Upper Missouri River and the Upper Missouri River Breaks National Monument.  This wild section of the Missouri River involves  a fantastic journey canoe adventure down 149 miles of some of the most remote and untouched areas in America.

Lewis and Clark described it as having "Scenes of Visionary Enchantment", where the legendary "Missouri River White Cliffs" watch over the wild Missouri.

Very little has changed since Lewis and Clark first traveled up the Missouri River in 1804... and you will be able to visit some of the original Lewis and Clark River Campsites, as well as explore old Fur Trader Posts, Native American encampments, steam boat landings and abandoned homesteads.  And as you float down this tranquil river, the scenery is breathtaking, which combined with the deep history, makes this canoe adventure something you will never forget. 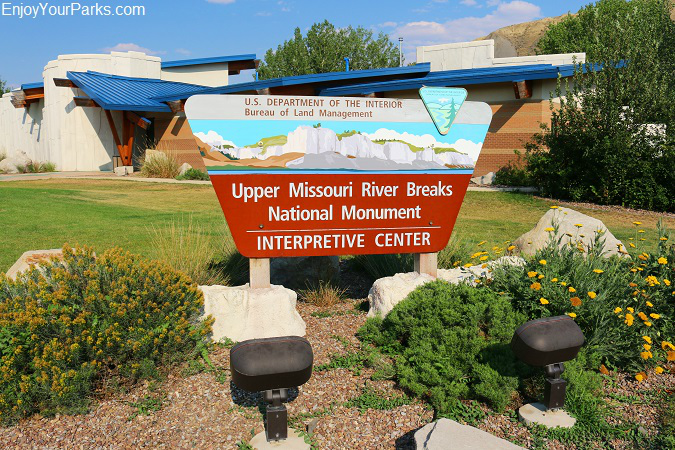 The Upper Missouri River Breaks National Monument Interpretive Center is the place to go to learn all about this unique and wild section of the Upper Missouri, including details about the 100+ mile canoe adventure through this untouched area of the Great American West.

Top Things To Do In Montana: Fort Benton 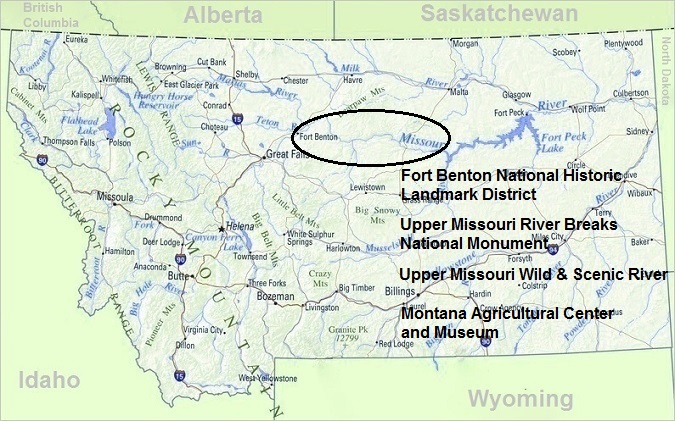