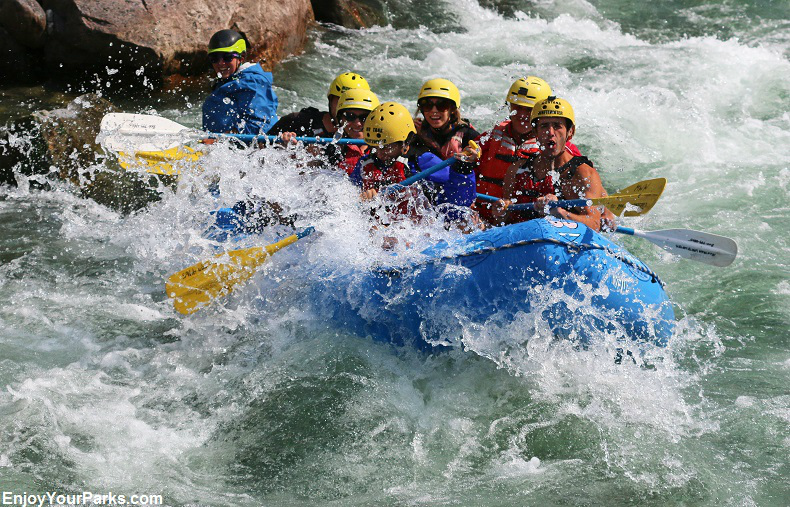 "A River Runs Through It"

The Gallatin River Canyon is world renowned for its blue ribbon trout waters for fishermen, incredible white water for rafters and kayakers alike, amazing scenery, camping, hiking and hunting. Many famous river scenes in the Robert Redford movie "A River Runs Through It" was filmed in Gallatin Canyon, which further elevated its fame. The Gallatin Canyon is also where visitors access the legendary Big Sky Ski Area, where some of the best skiing in the world awaits skiers at Big Sky Resort. There are also several wonderful campgrounds located throughout the Gallatin River Canyon Area. 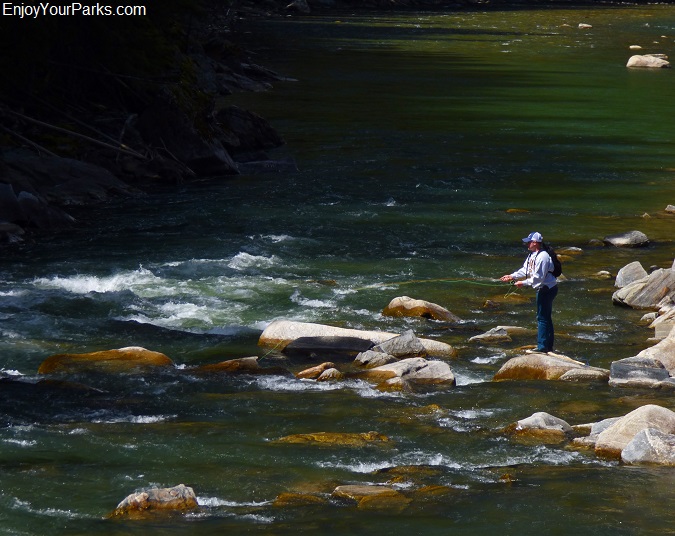 Many of the river scenes in the movie "A River Runs Through It" was filmed in the Gallatin Canyon. 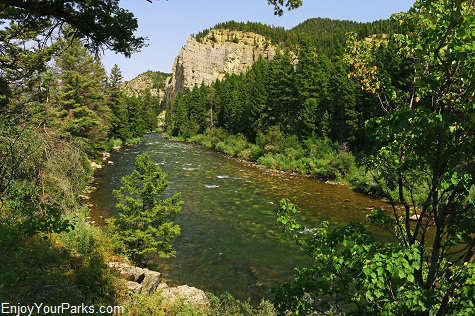 The Gallatin River Canyon, also known as "Gallatin Canyon", and known by locals as simply "The Canyon", is an extremely scenic stretch of river where U.S. Highway 191 runs from Bozeman, Montana south to where the highway then follows the Gallatin River through this spectacular canyon, and eventually takes its travelers past Big Sky Montana to the West Entrance of Yellowstone National Park at West Yellowstone, Montana. 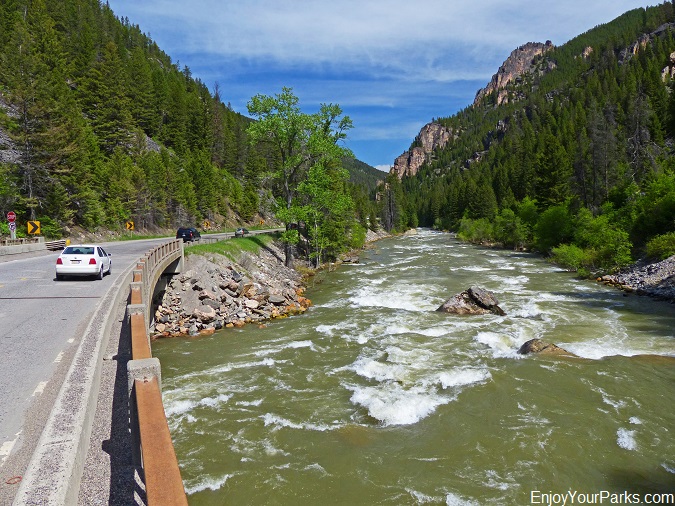 Highway 191 closely follows the Gallatin River all the way through the scenic Gallatin Canyon. 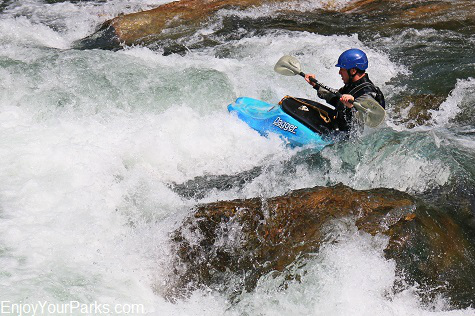 Because the Gallatin River Canyon is so narrow, and because of the significant numbers of huge boulders found in certain sections of the Gallatin River, this results in some of the best white water in the Rockies.

In June, as the snow melts off the high peaks of the Gallatin and Madison Mountain Ranges, the Gallatin River swells and turns into a raging torrent. 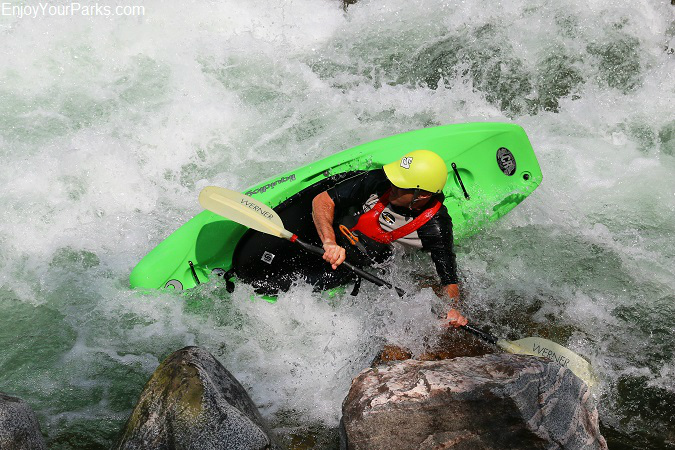 The Gallatin River Canyon is a dream come true for kayakers. 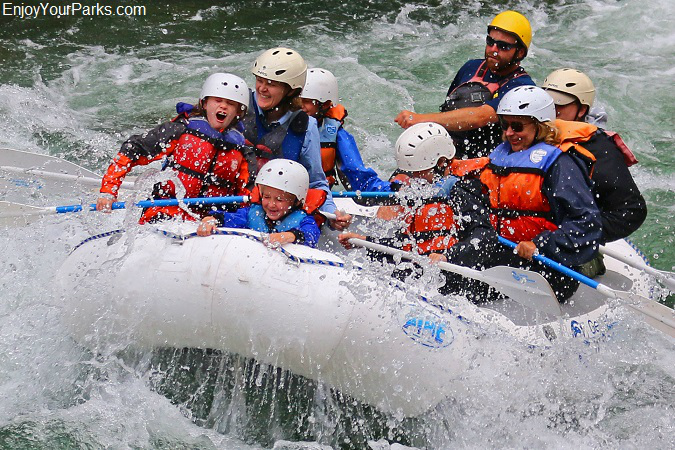 If you like white water, you'll love the Gallatin River Canyon. 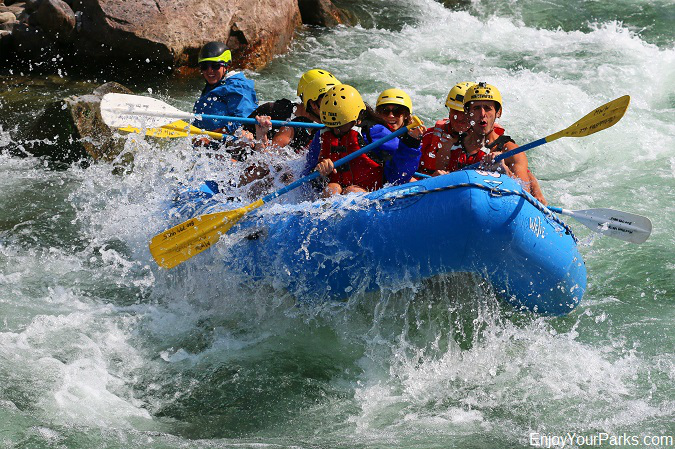 The Gallatin River Canyon offers some of the best white water in the Greater Yellowstone Area. 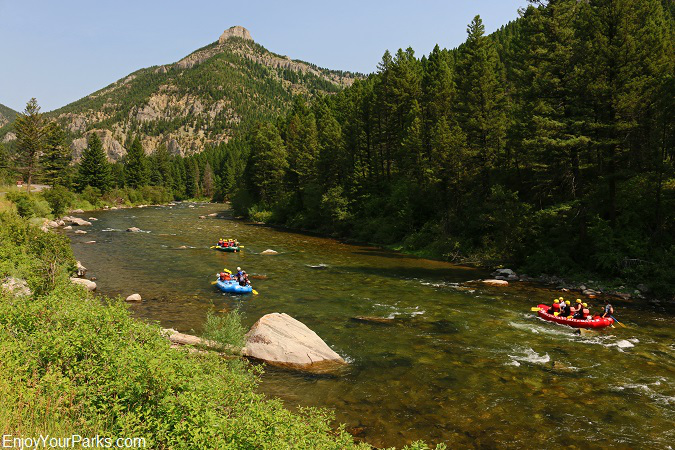 Rafters enjoying a slower stretch of the Gallatin River after enduring "The Mad Mile". 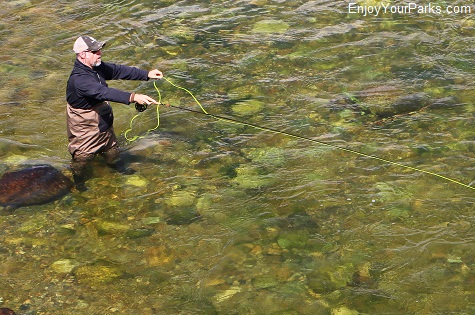 The Gallatin River is a world-class blue ribbon trout stream and its waters are legendary in the fly fishing world.

As this gorgeous river winds through the Gallatin Canyon, you will see fly fishermen and women trying their luck.

And if this was ever a very well kept secret, after the Robert Redford movie "A River Runs Through It" came out in 1992, the secret was out for the world to discover. 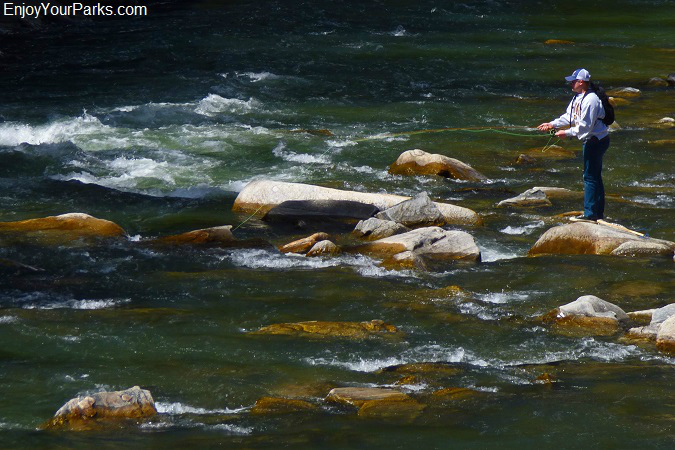 The Gallatin River in Montana is a legendary blue ribbon trout stream. 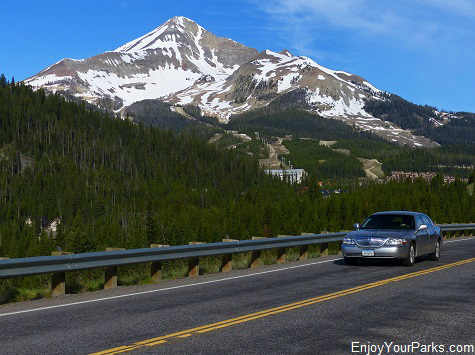 Located midway down the Gallatin Canyon is Big Sky Montana, where one of the premier ski resorts in the country is located.

Big Sky Resort boasts the "Biggest Skiing In the United States" as it is 5,800 acres in size and has a vertical drop of 4,350 feet!

Located midway down the Gallatin Canyon, this amazing ski and summer resort is nestled around the towering Lone Mountain in the Madison Mountain Range, and is very much worth exploring. 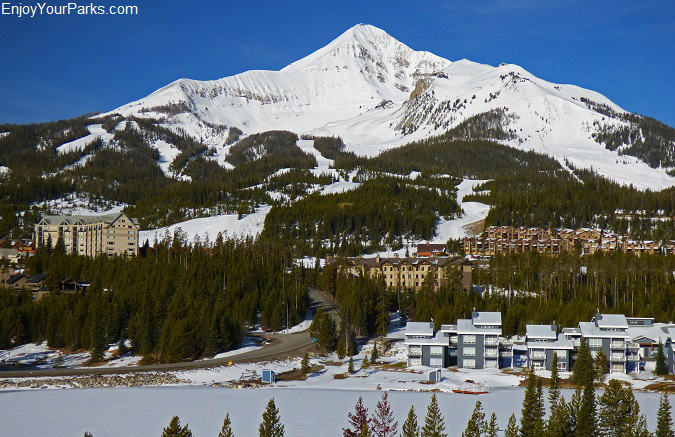 Big Sky Resort boasts "The Biggest Skiing in the United States" with 5,800 acres of downhill skiing and over a 4,350  foot vertical drop! 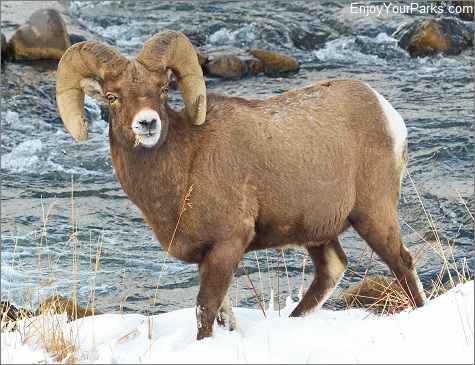 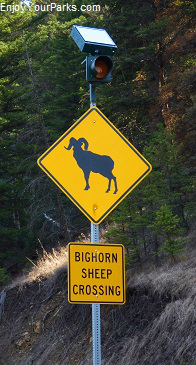 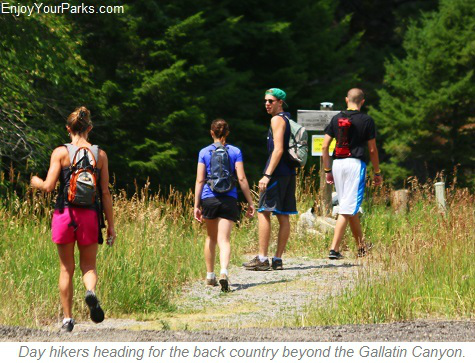 These trailheads are clearly marked, and are convenient entrance points to some absolutely amazing back country experiences.  In fact, some of these trails take you into extremely remote wilderness areas that are seldom seen by humans... 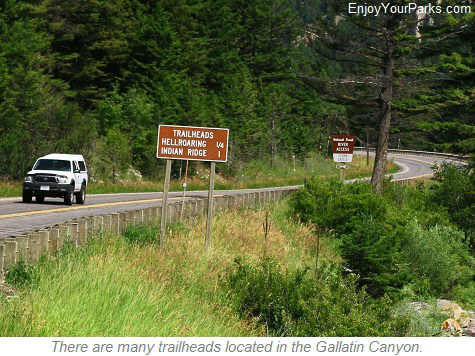 One of the most popular back country destinations beyond the Gallatin River Canyon is the Spanish Peaks Wilderness Area.  This magnificent area is a sub-section of the massive three million acre Lee Metcalf Wilderness Complex that is located throughout the Madison Mountain Range.

Located along the northern-most section of the Gallatin Canyon, this incredibly rugged and scenic landscape has a wonderful trail system, and is definitely something to pursue if you're looking for some outstanding overnight backpacking opportunities as well as amazing day hikes.

This 23 mile long trail system takes you through breathtaking scenery that never fails to impress its visitors.  The Spanish Peaks Wilderness Area is nationally famous and well worth your time exploring. 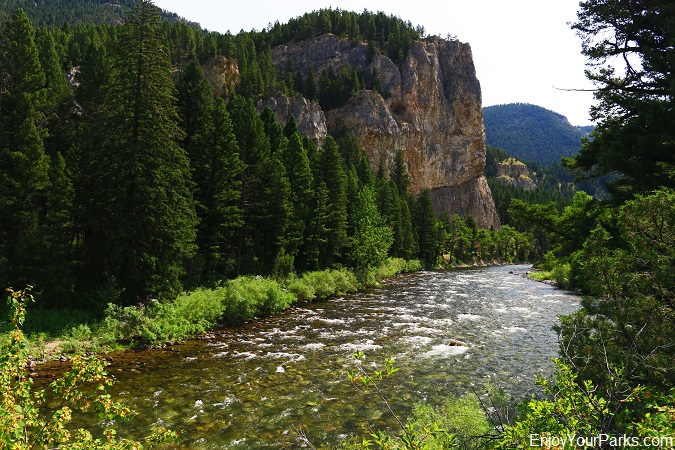 The Gallatin River was named by Meriwether Lewis in July of 1805 during the historic Lewis & Clark Expedition at the headwaters of the Missouri River.  The river was named after Albert Gallatin, who was the U.S. Treasury Secretary at that time. 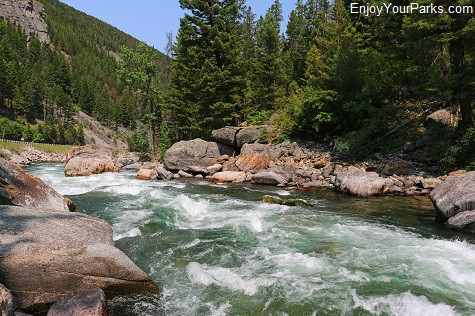 The additional two rivers that join with the Gallatin River to form the Missouri are the Jefferson River and Madison River, which were named after President Thomas Jefferson and Secretary of State James Madison during that period.

The Gallatin Canyon was first explored by Native American hunters thousands of years ago, and the first European-Americans to entered this canyon were fur-trappers and gold prospectors in the late 1800s and early 1900s.

In 1898, a gentleman by the name of Pete Karst homesteaded in the Gallatin Canyon, where his new ranch included an inn for wearing travelers, where he would serve these guests homemade liquor that he proudly made during the prohibition years.  In 1924, he began running a very successful bus route between Gallatin Gateway (a small town just north of Gallatin Canyon),  south to the West Entrance of Yellowstone National Park at West Yellowstone Montana.  His homestead became known as "Karst Camp", where  he developed the very first tow rope ski hill in the state of Montana. 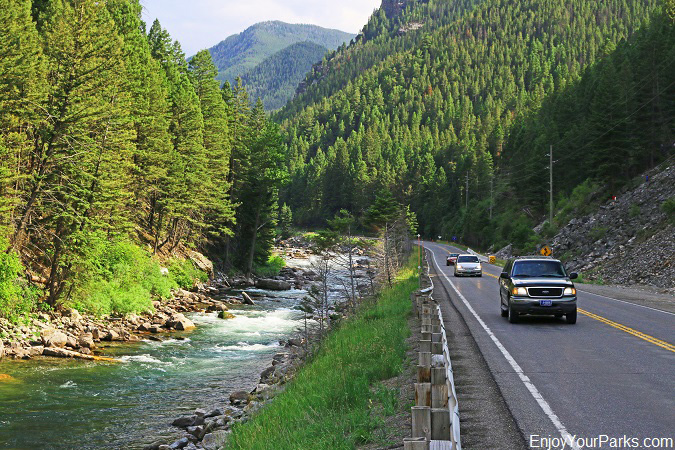 The Gallatin River Canyon is a gorgeous drive and a gateway to many outdoor adventures... just make sure you drive carefully and slowly along this narrow and winding road.

You may notice all the white crosses along the highway through the Gallatin Canyon.  These white crosses represent where travelers lost their lives during car accidents.  Sadly there are a lot of crosses because this stretch of the road is extremely narrow and has many sharp turns and bends as it follows the river. Adding to the situation is the heavy amount of snow this canyon receives during the winter.  So the bottom line is this: Take your time, don't rush, and please drive the speed limit. 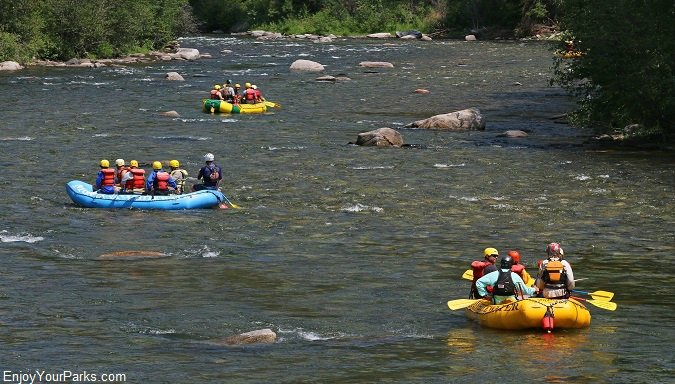 Top Things To Do In Montana: Gallatin River Canyon 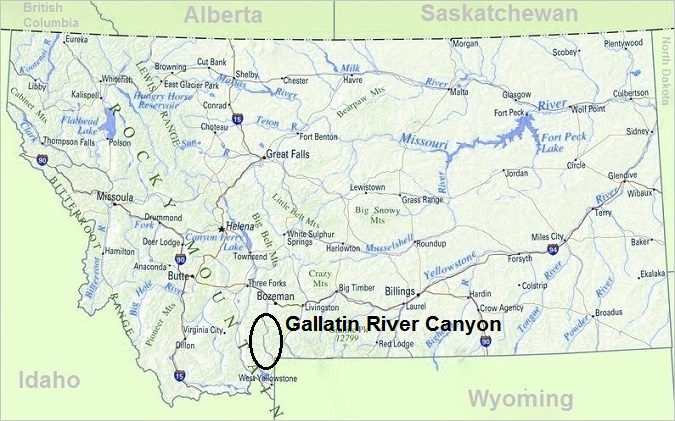