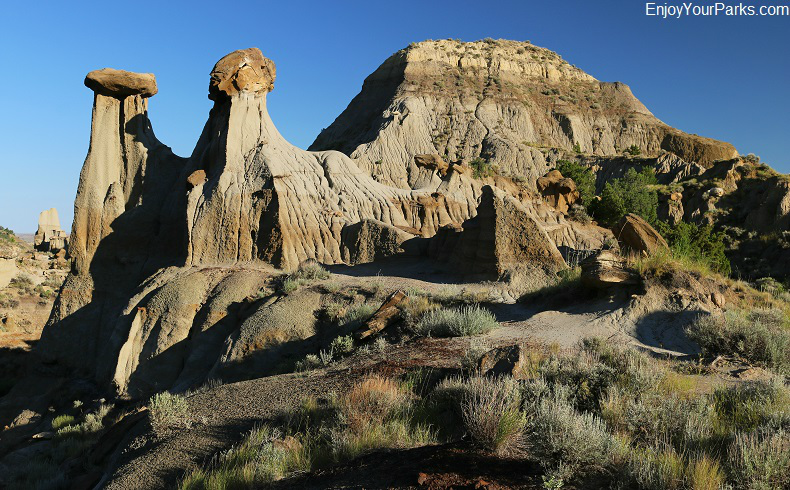 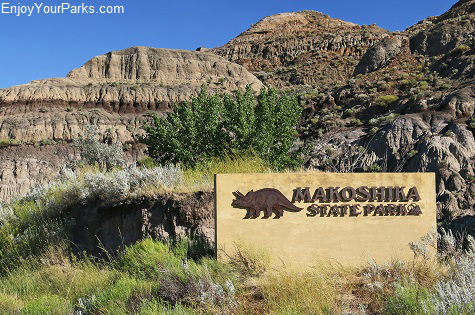 Makoshika State Park is the largest State Park in Montana.  This 11,538 acre park is located just east of Glendive Montana in Eastern Montana, and contains spectacular badlands that are truly breathtaking to say the least. The name "Makoshika" is a Lakota phrase that means"Bad Land" or "Bad Spirits".

Makoshika State Park is packed full of fascinating geology, spectacular vistas, terrific camping and hiking opportunities and year round enjoyment of its unique and colorful scenery.

The unique landscape of Makoshika State Park has everything from fluted hillsides, pinnacles, gully-filled slopes to amazing "cap rocks" that are everyone's favorite formations. Throughout the day, as the sun continues to move across the sky, the lighting dramatically changes the landscape... In fact, from morning to evening, the landscape COMPLETELY changes in physical appearance and color.  It truly is an amazing sight to behold, and its impossible to explain.  You'll just have to see it for yourself! 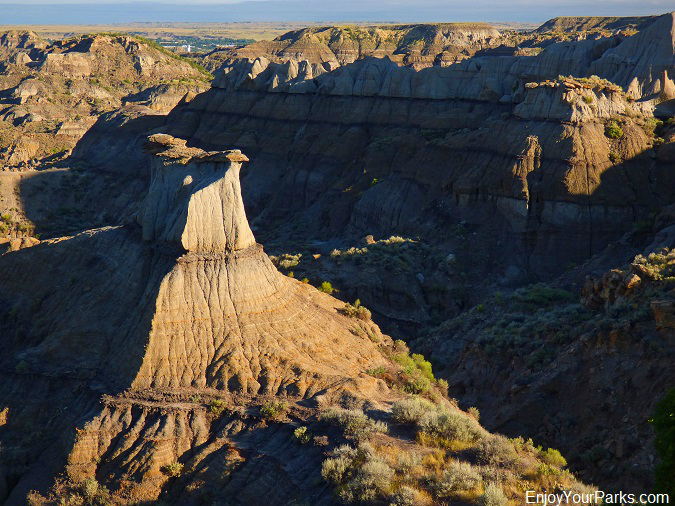 The light and shadows in Makoshika State Park are constantly changing throughout the day.

There are basically two different "sections" of Makoshika State Park in Montana, which we will call the "Lower Section" and the "Upper Section".  The "Lower Section" takes you through the bottom of the main canyon (Cains Coulee), and includes the main campground, the group picnic area, and the Diane Gabriel Trailhead.  The road is quite level in this section. Then after about 5 miles, the road begins to climb up the side of a fairly steep slope and works its way up to what we call the "Upper Section".... 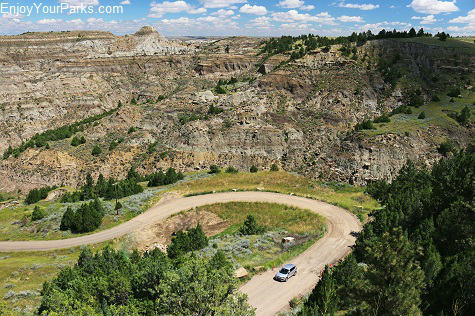 The "Upper Section" of Makoshika State Park is our favorite area of the park.  This section allows you to look down on the amazing coulees and fascinating landscape.

The vistas from up here are absolutely breathtaking, and we highly recommend that you take all the maintained road up here to explore these wonderful overlooks.  The Makoshika Amphitheater is located up here, as well as the Cap Rock Trailhead, Artist's Vista Campground and Pine On The Rocks Campground. 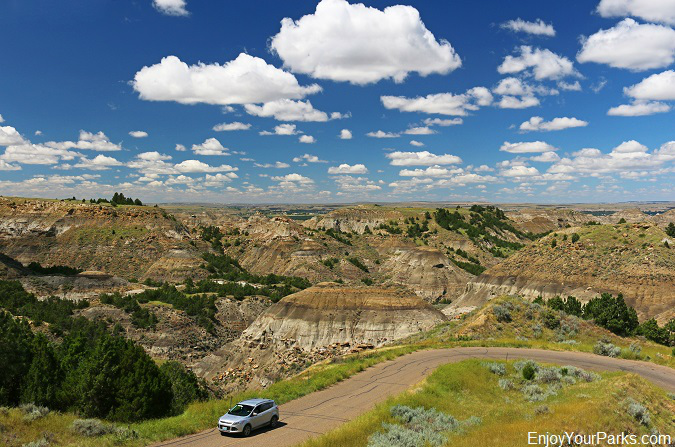 Makoshika State Park provides what seems to be endless beauty under the "Big Sky" of Montana. 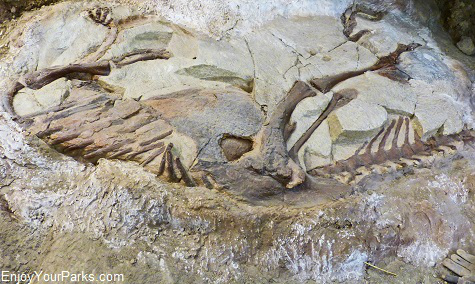 A Thescelosaurus fossil was found by the world-renowned paleontologists Jack Horner (Museum of the Rockies) and Bob Harmon in 1997.

Of course there are more dinosaur fossils to be found in Makoshika, and as the wind, rain, snowfall, creeks and rivers continue to erode these rugged badlands, more and more fossils will show themselves.  So far, over 10 species of dinosaurs have been found in Makoshika State Park. 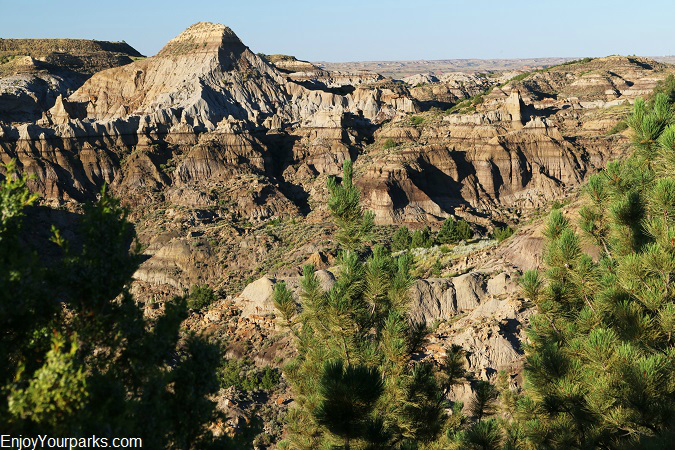 The badlands found at Makoshika State Park are very different from the Dakota Badlands.  The exposed rocks at Makoshika are much older rock layers, and provide classic illustrations of the geologic time period that represents the transition from the "Age of Dinosaurs" to the "Age of Mammals". 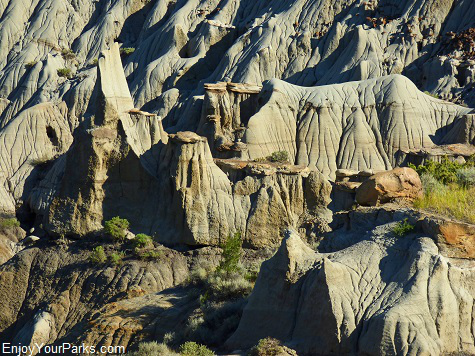 All of the layers that you see exposed in Makoshika State Park in Montana are sedimentary.  These layers of rocks were formed many millions of years ago as ancient seas advanced and receded over time.  The Cretaceous Period, which is known as "The Age of Reptiles", was the period between 145 million years ago to 65 million years ago, and this is where the dinosaur fossils are located.

The Cretaceous Period was a time of lush vegetation and a sub-tropical environment.  The very last sedimentary layer of the Cretaceous Period, is called the Hell Creek Formation, which is where nearly all of the dinosaurs that have been discovered in Makoshika State Park were found.

This period of about 65 million years ago is when the Rocky Mountains were forming to the west, and beyond this period began the "Age of Mammals", which can be documented in the formation above the Hell Creek Formation known as the Fort Union Formation of the Paleocene Period.  The Paleocene sediments were deposited after the Age of Dinosaurs and following the extinction of many additional species. 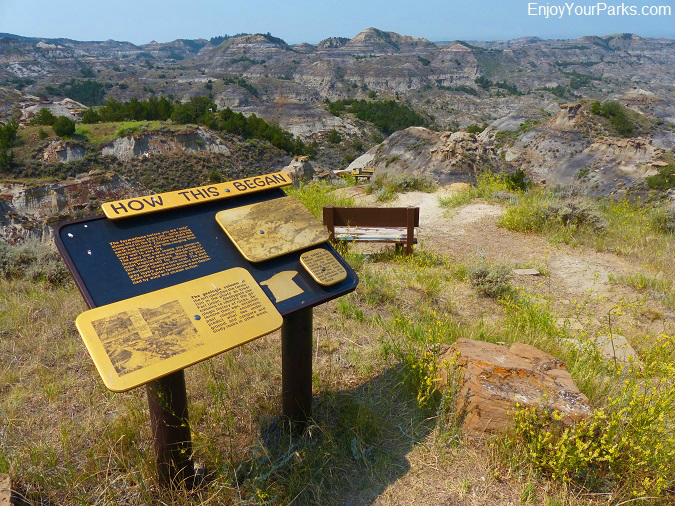 One of the many displays found throughout Makoshika State Park explaining how it was formed.

Only in the last several million years erosion has exposed these sedimentary layers of rock and allowed the exposure of these fossils. Water and wind are constantly changing the landscape almost daily.  The ever-popular "Cap Rocks" are created by the softer clay and shale layers being eroded away, leaving the harder sandstone layers that sit on top of these softer layers intact.  This in time creates the sandstone "Caps" literally sitting on top of columns of softer clay and shale deposits.  In addition to Cap Rocks, the Makoshika State Park landscape includes fluted hillsides, gullied slopes, hogback ridges and pinnacles. 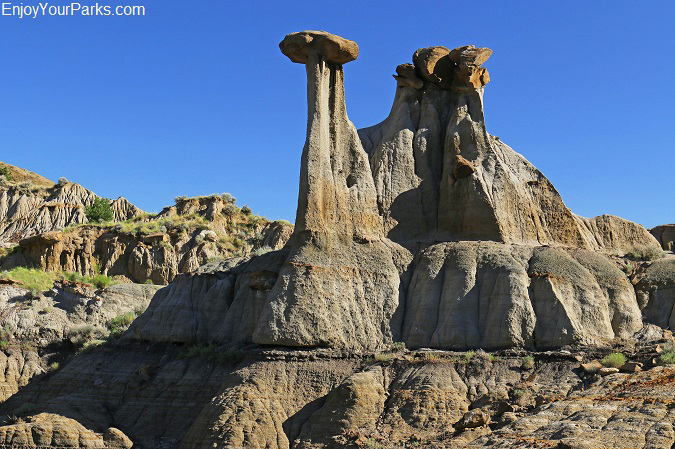 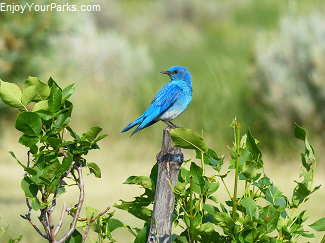 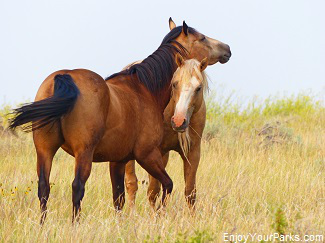 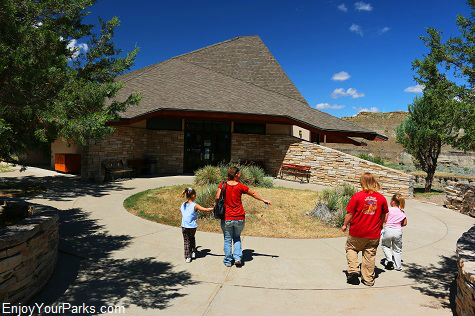 The newly remodeled Makoshika State Park Visitor Center provides extremely helpful information, and is also a "museum" with dinosaur fossil displays as it walks you through millions of years.

These helpful displays also explain and illustrate how this amazing badland landscape was created.

The Makoshika State Park Visitor Center is a very well done and everyone who visits Makoshika State Park really needs to spend time in it to better understand all there is know about this unique park. There is also an extremely helpful and pleasant staff that are more than happy to help you with any questions you may have. 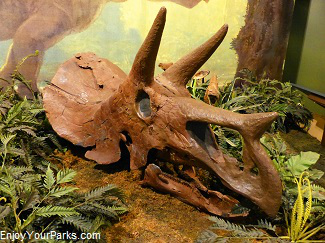 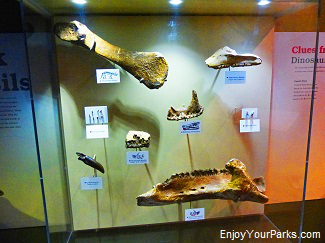 Campgrounds and Other Facilities 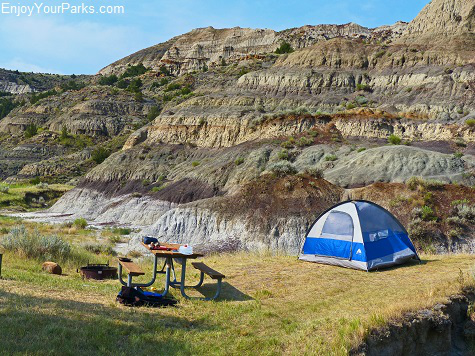 Further inside the park, after the road climbs to the "Upper Section", there are two additional campgrounds, which are the Pine On The Rocks Campground and the Artist's Vista Campground. These campgrounds are best suited for smaller rigs and tents.
There is also a frisbee course known as a "FOLF COURSE" near the main campground, a very nice group picnic area, and the Makoshika Amphitheater. This outdoor amphitheater is found in the "Upper Section" of Makoshika State Park, and is very much worth visiting, as it allows you gain easy access to some incredible Cap Rocks. 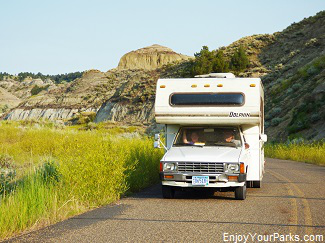 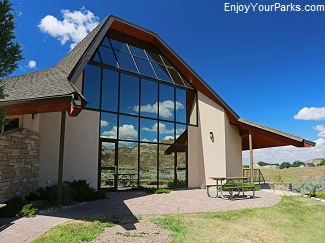 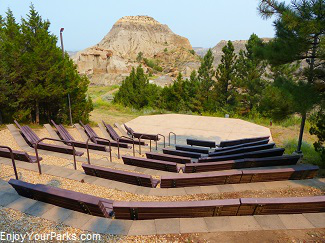 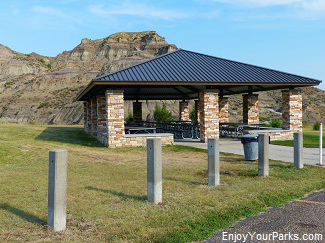 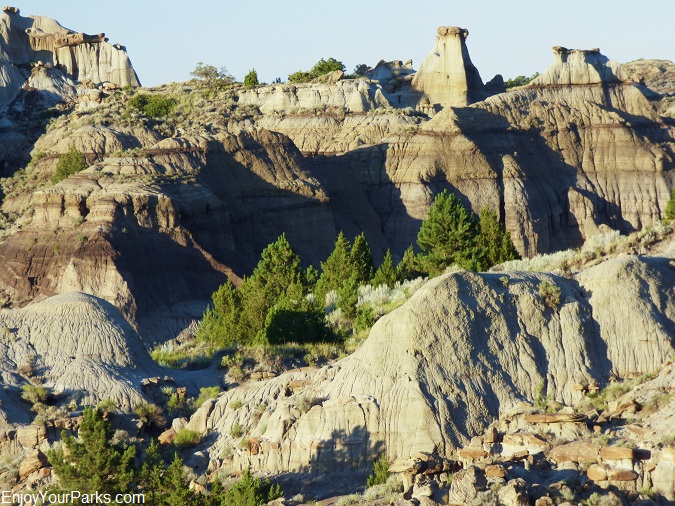 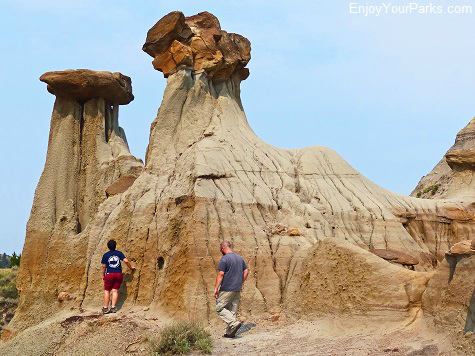 These trails take you deeper inside the badlands that you otherwise would not know existed while driving the main roads.

The Diane Gabriel Trail, Cap Rock Trail and Kinney Coulee Trail are among the most popular hikes.

The Makoshika State Park Visitor Center will provide you with a detailed trail map, as well as up to date information on trail conditions. 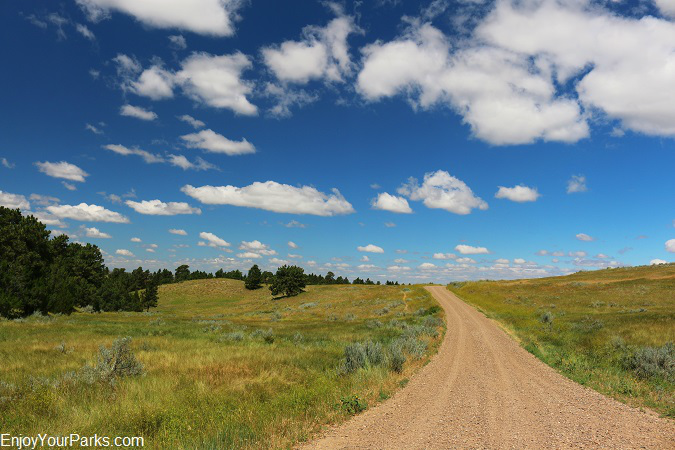 This is one of the roads in the "Upper Section" that take visitors to unbelievable vistas. 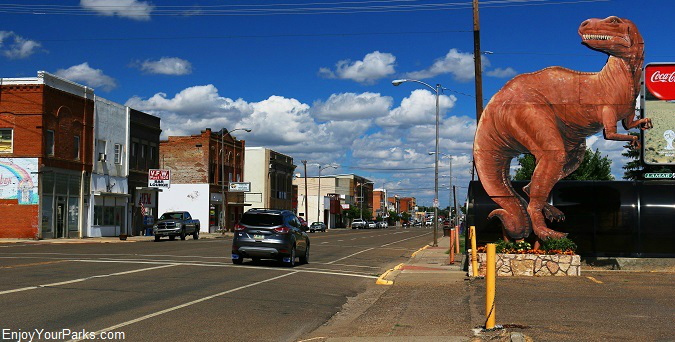 Makoshika State Park is located very close to the town of Glendive, Montana.  Glendive is home to two fascinating dinosaur museums that we highly recommend that you visit... 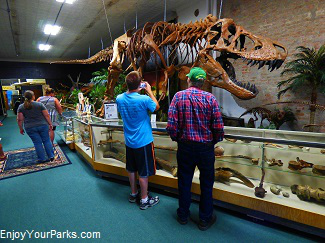 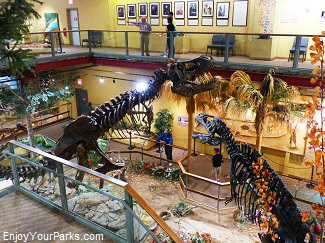 Top Things To Do In Montana: Makoshika State Park 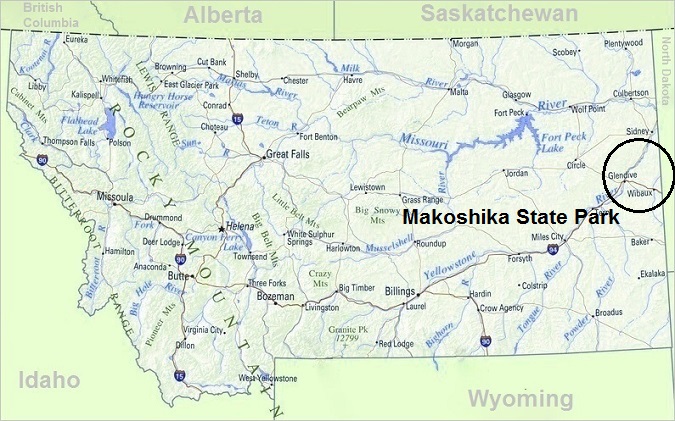