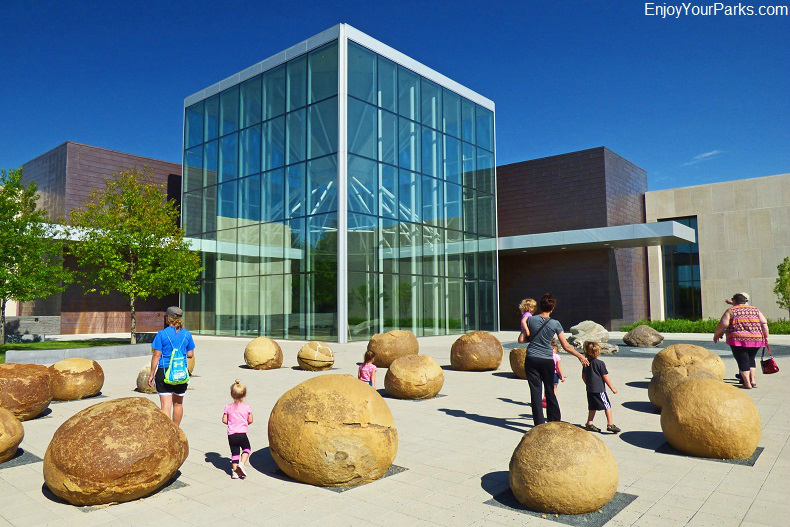 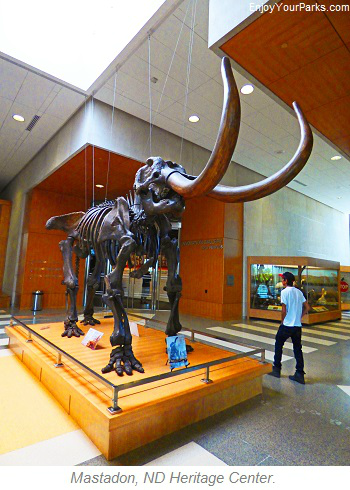 Bismark North Dakota is home to several "must see" attractions that we strongly recommend that you take the time to discover and explore during your North Dakota vacation.  One of the North Dakota top attractions in the Bismark Area is the world-class North Dakota Heritage Center and State Museum, which is one of the top state heritage centers found anywhere in the country.

There is so much to see at this world-class center... and there is truly something for everyone in the family...from many incredible dinosaur displays that include a T-Rex skeleton, to the largest giant squid fossil found in the entire world, to rare native pottery to a space suite designed for a trip to Mars.

There are thousands of specimens and artifacts, as well as interactive exhibits and super high-tech displays that will not only spark your imagination, but will help you truly get a "feel" for just how great North Dakota truly is.  There are presently four amazing museum galleries that will trace North Dakota's history beginning at about 600 million years ago through the modern day oil boom. 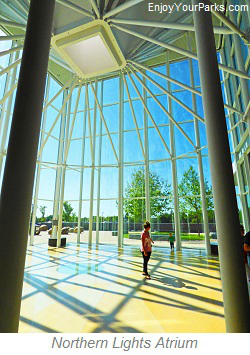 About the Northern Lights Atrium
The gorgeous atrium at the North Dakota Heritage Center is special.  In fact very special.  The Northern Lights Atrium is the only design of its kind in the entire country.  The amazing steel and glass structure gives recognition to early Native American architecture as it is constructed with 20 poles...which is the same as the Native American earth lodge construction.

Adaptation Gallery: Geologic Time
The Adaptation Galley in the North Dakota Heritage Center provides absolutely remarkable displays of dinosaurs... It's so impressive and fascinating that it's our personal favorite and we can't seem to spend enough time there.  The Adaptation Gallery walks visitors through time... geologic time.  You and your family will be amazed at just how world-class this gallery is, and you'll definitely enjoy seeing the life-sized skeletons of a Tyrannosaurus Rex getting ready to fight a Triceratops! There is also a 12 foot dinosaur sea turtle among the many other spectacular dinosaur displays within the Adaptation Gallery.  You'll also meet "Dakota", which is a 67 million year old Hadrosaur fossil...which is one of only six known hadrosaur mummies that are naturally preserved.  The skin is nearly all intact and there are even visible scales!  This amazing Hadrosaur fossil was found in North Dakota in 1999 near Marmath. 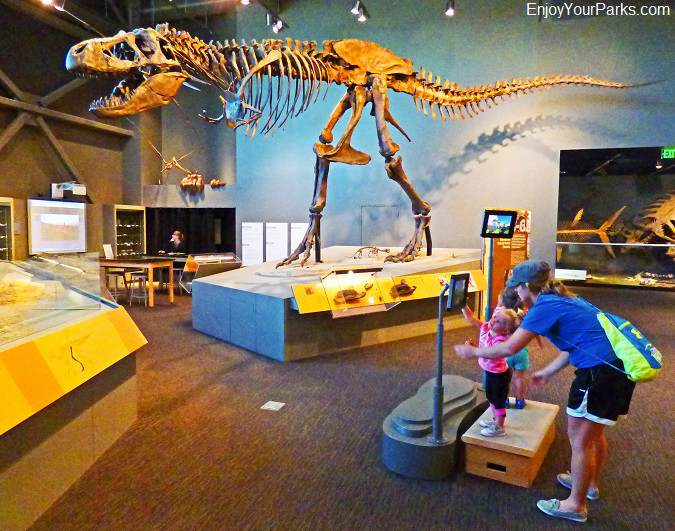 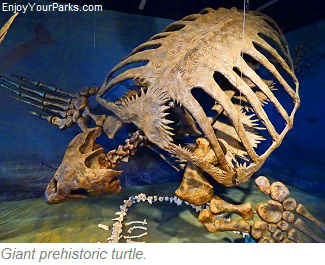 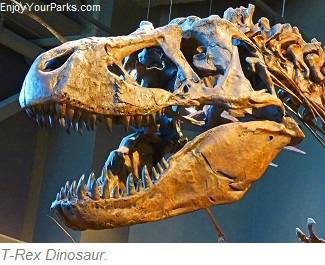 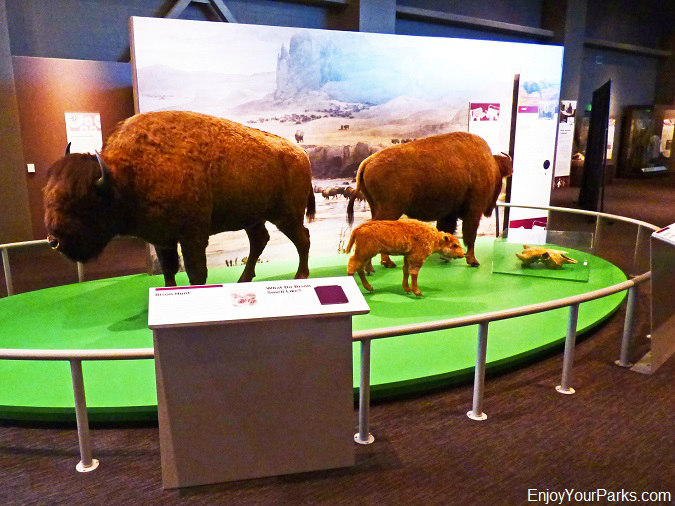 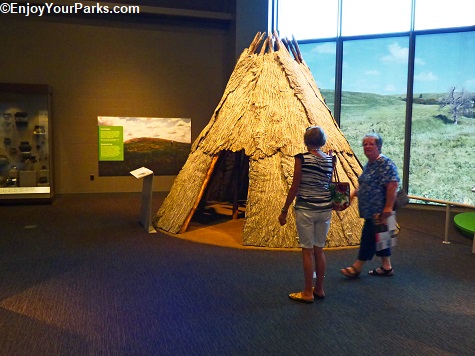 The Innovation Gallery: Early Peoples is another world-class gallery found at the North Dakota Heritage
Center, where it features over 1,000 artifacts from early life in North Dakota that help tell the story of North Dakota's distant past of early people on the Northern Plains.

One of the highlights of this gallery is a hand-painted 6 foot by 5 foot cyclorama painted by the nationally renowned artist Robert Evans of the Double Ditch Indian Village that depicts life there in the mid 1500s.

Inspiration Gallery: Yesterday and Today
The North Dakota Heritage Center also has a wonderful gallery called the Innovation Gallery: Yesterday and Today.   This incredible gallery has six themes that include Industry and Energy, Agricultural Innovations, Conflict and War, Cultural Expressions, Our Communities, Our Lives, and Newcomers and Settlement.  The Inspiration Gallery covers North Dakota's fascintating story starting at about 200 years ago, all the way to present times. 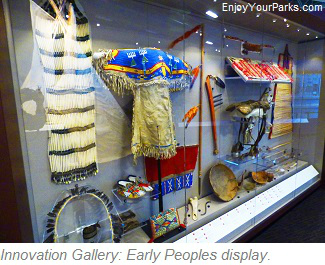 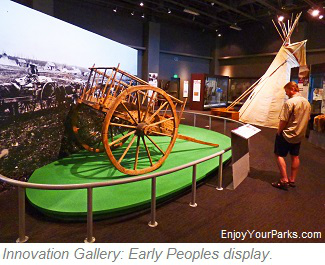 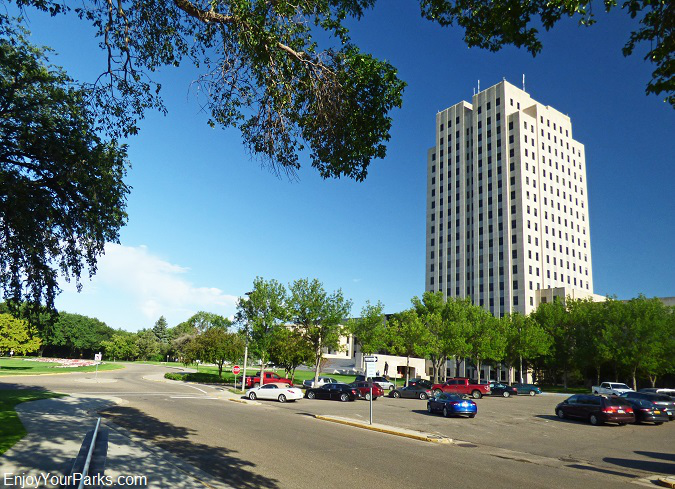 Owned and operated by the Fort Abraham Lincoln Foundation, tourists of all ages are welcome to experience a wonderful Missouri River riverboat cruise.  Available from May through September, you have the choice of a daytime cruise or the popular dinner cruise at sunset.  the Lewis and Clark Riverboat Cruise is fun, entertaining, and a great way to get on the legendary Missouri River. 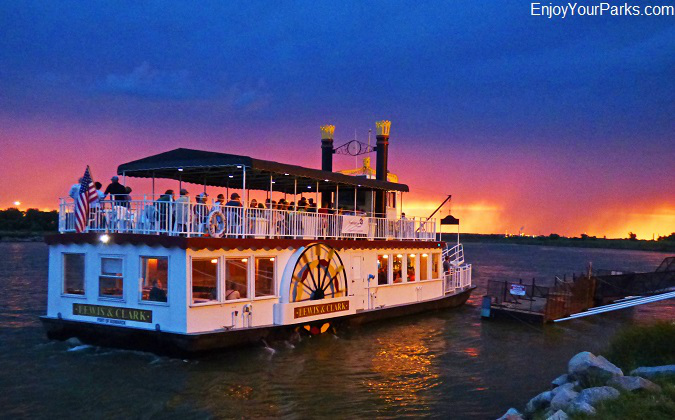 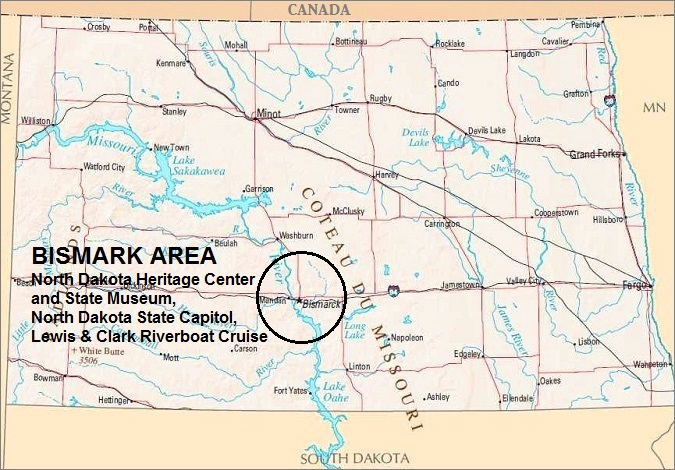