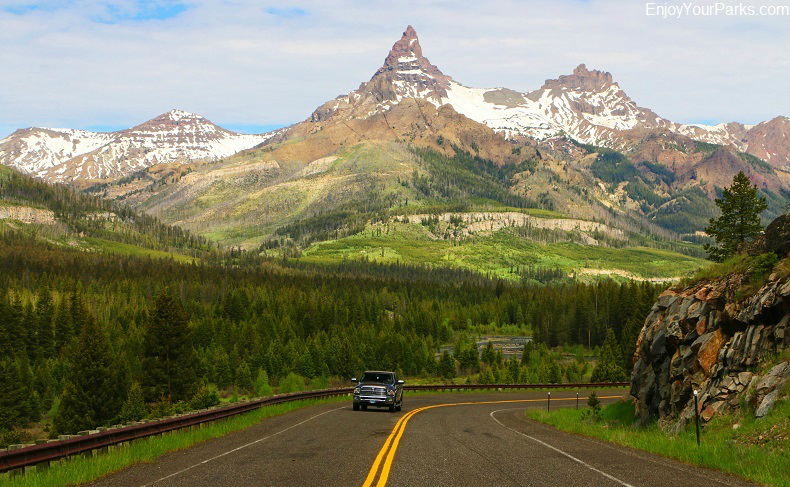 The Chief Joseph Scenic Byway of Wyoming runs between Cody Wyoming and the Northeast Entrance to Yellowstone National Park, and is an incredibly scenic drive.  Also known as the "Sunlight Basin Highway", 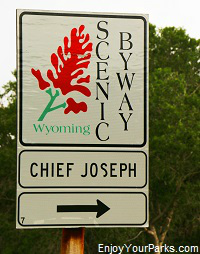 the 47 mile long Chief Joseph Scenic Byway is officially Wyoming Highway 296, and is an extremely popular scenic route for visitors coming from Cody Wyoming and heading for Yellowstone Park.

The Chief Joseph Scenic Byway crosses the Shoshone National Forest via the Clarks Fork Valley, and then connects with U.S. 212, which is the legendary Beartooth Scenic Byway.  As you drive through the Clarks Fork Valley, the mighty Beartooth Mountains tower above you to the north, and the incredible Absaroka Mountains tower above you to the south.  This entire area is in the heart of grizzly bear country, and runs along the North Absaroka Wilderness to the south and the Absaroka-Beartooth Wilderness further to the north.  And through the Clarks Fork Valley, the gorgeous Clark's Fork of the Yellowstone River runs along the highway to further enhance the already spectacular scenery.

The reason this scenic highway is named Chief Joseph Scenic Byway is because this road follows the same route Chief Joseph and his Nez Perce people took as they were running from the U.S. army during the Nez Perce War of 1877.  The history that unfolded here is incredible, and we'll give you an overview further down this page.  If you like fascinating history, you'll love what happened on this route many, many years ago. 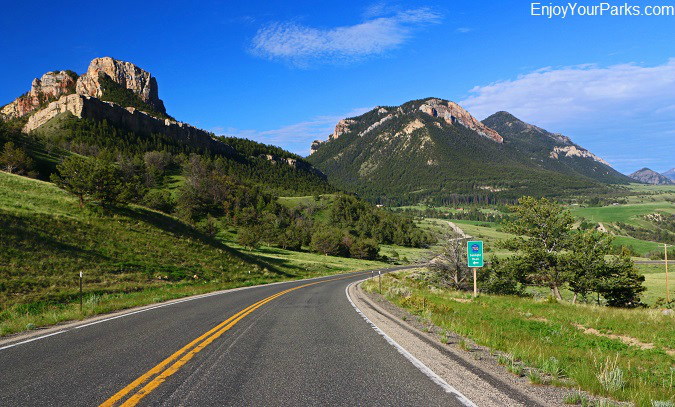 How to Get There

From Cody Wyoming, to get to the official start of the Chief Joseph Scenic Byway (a.k.a Sunlight Basin Highway), head north on U.S. 120 for about 17 miles.  At this point you will encounter the junction of Wyoming 296, which is the official start of the Chief Joseph Scenic Highway as Wyoming 296 heads west toward Yellowstone National Park.  The Byway runs for 47 miles, and then connects with the Beartooth Scenic Byway, which is U.S. Highway 212.  From there you will enter Cooke City and Silver Gate Montana, which are the gateway towns of the Northeast Entrance to Yellowstone National Park.  Allow at least an hour to drive the wondrous and scenic Chief Joseph Scenic Byway of Wyoming. 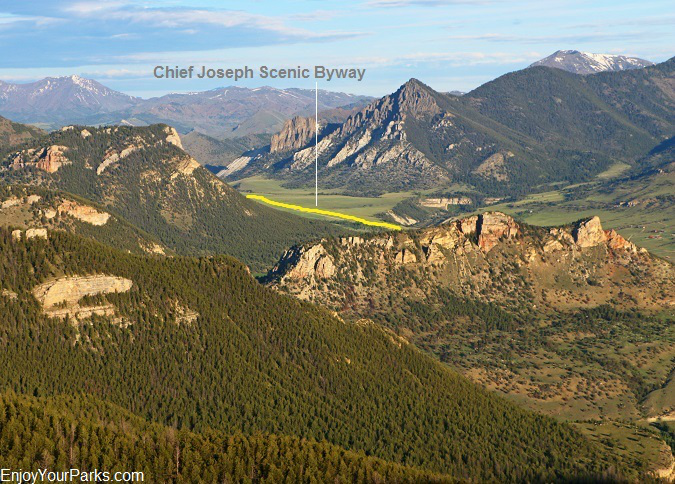 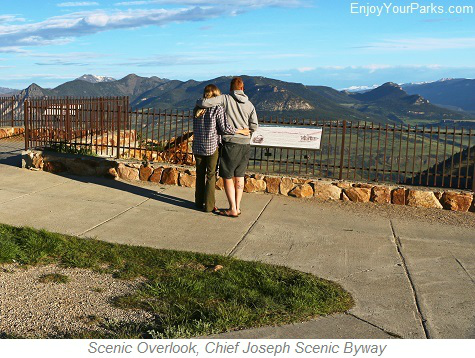 Along the Chief Joseph Scenic Byway will see a fair number of turnouts and pullouts that will provide you with fantastic views of the gorgeous scenery.  You will also see some popular trail heads that take hikers into the back country of this incredible area.

The Clarks Fork Valley is so scenic that we highly recommend that you take your time and enjoy this Rocky Mountain paradise.

Along the Chief Joseph Scenic Byway are many opportunities for travelers to see wildlife, ranging from elk, deer and moose... to grizzly bears!  You just never know what you'll find around every corner, so we highly
recommend that you have your camera ready at all times!  The Clarks Fork Valley is a haven for wildlife of many species, and the Chief Joseph Highway  takes you right through the middle of it! 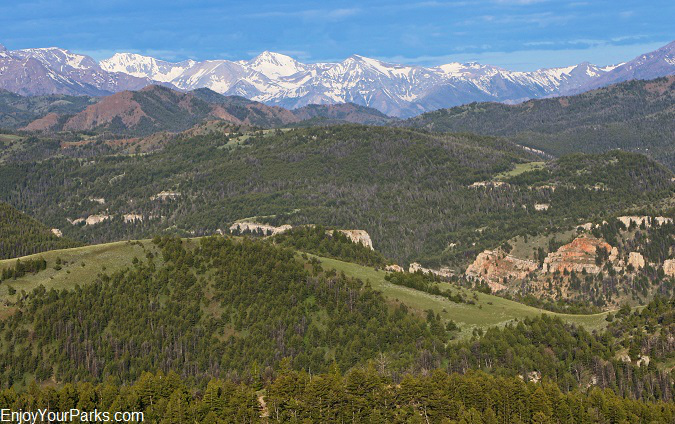 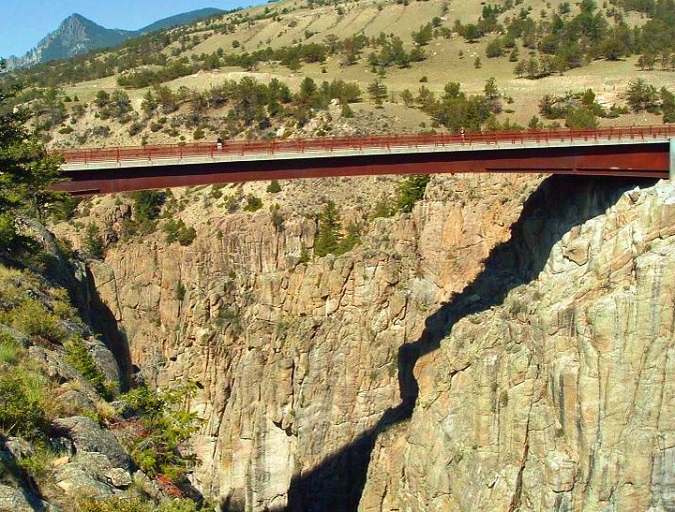 On your trek along the Chief Joseph Scenic Byway in Wyoming, you will pass over the Sunlight Bridge which crosses Sunlight Creek, as well as Dead Indian Pass.  You can't help but notice the unbelievable 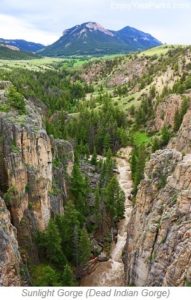 shear cliffs on each side of creek...reaching a thousand feet in height.  This is known as either "Sunlight Gorge" or "Dead Indian Gorge", and is quite breathtaking.  It's really worth your while to read the interpretive signs in this area, as they explain the remarkable history that occurred here....it's really fascinating.

The Chief Joseph Scenic Byway follows the same route that Chief Joseph did during the Nez Perce War of 1877 as he and his Nez Perce Tribe were running from the U.S. Army as they tried to make it to Canada to avoid being confined to a reservation.

This group of brave Native Americans consisted of 700 Nez Perce men, women and children, along with about 2,000 horses.  Led by Chief Joseph, they just survived the Big Hole Battle in Southwest Montana, and were attempting to elude the U.S. Army as they made their way across the Canadian Border.

The U.S. Army who were chasing Chief Joseph were led by General O. O. Howard, and he quickly learned that he was dealing with a military genius and a determined leader.  Chief Joseph had just passed through Yellowstone National Park and were heading eastward toward the plains.

Attempting to out smart Chief Joseph, General Howard stationed General Samuel D. Sturgis and 600 cavalry men near the base of the mountains to intercept them along the Clark's Fork River, or the Shoshoni River...whichever river the Nez Perce chose to follow.  Sturgis was convinced that there was "No trail that 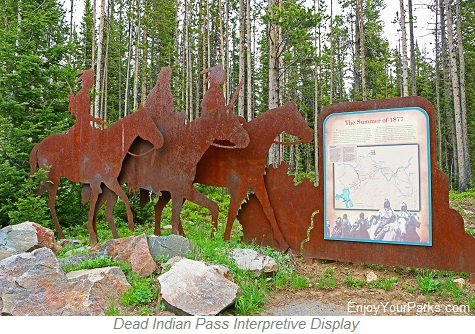 could possible lead through the mountains that would lead them out", because there were several miles of shear cliffs and vertical walls that he felt was impossible to traverse, so he discounted this escape route.

Then on September 8, 1877, the Nez Perce led by Chief Joseph, reached Dead Indian Pass only about 6 miles from General Sturgis's troops waiting on the prairie below.  Indian scouts saw these troops and reported back to Chief Joseph.

With the knowlege that any other way out of the mountains General Sturgis's cavalry would surely see them and attack, Chief Joseph and his band dropped from Dead Indian Pass into the Clark's Fork Canyon through this incredibly narrow, rock walled gorge that General Sturgis thought was impossible to travel through.

To fool General Sturgis, the Nez Perce stirred up the horses to create a huge cloud of dust and headed them down the trail to the Shoshone River for  about a half mile to make General Sturgis think that the Nez 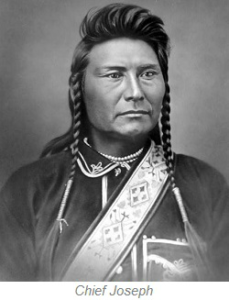 Perce were heading toward the Shoshone River drainage.  They then sneaked back north with the horses, hidden in heavy timber, and proceeded to traverse the incredibly narrow Dead Indian Gorge, with thousand foot cliffs and ledges barely wide enough for two horses. The entire group, including the horses, made it down this harrowing traverse to the Clarks Fork River and escaped.  A military historian wrote how brilliant this maneuver was to escape, and was impressed with Chief Joseph as well as the bravery of the hundreds of Nez Perce who traversed this incredibly difficult and dangerous topography.  Even though in the end Chief Joseph surrendered only 40 miles from the Canadian Border at the Bear Paw Battlefield, the generals who were involved with the chase and eventual victory all had great respect for Chief Joseph and felt he was truly a military genius. 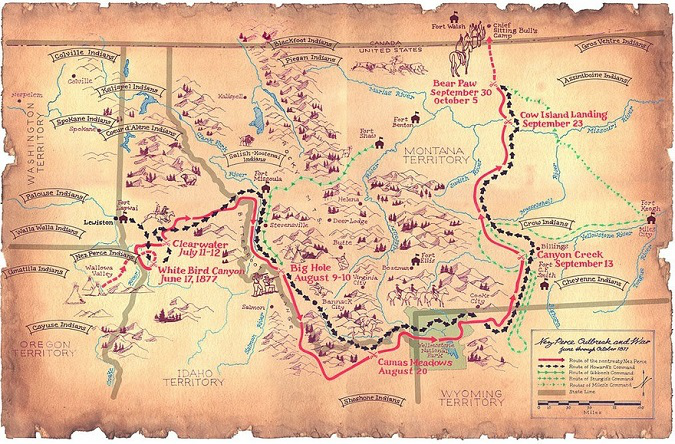 Route taken by Chief Joseph during the Nez Perce War of 1877. 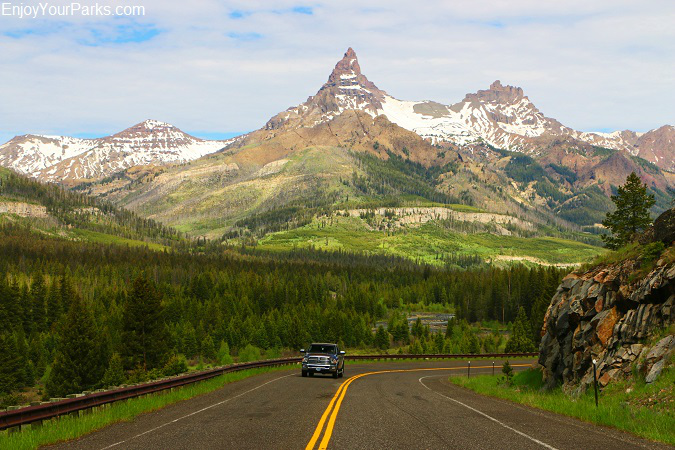 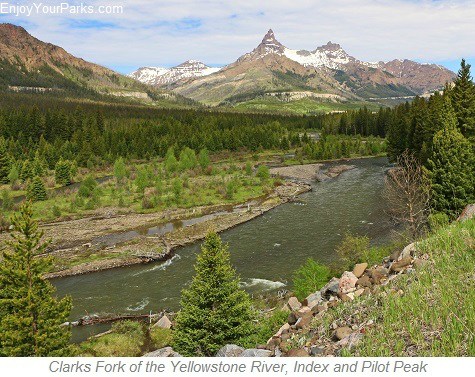 The names Pilot Peak and Index Peak refer to their alignment.  From the north these two peaks line up just like a mariner's sextant.

This unique alignment proved to be quite valuable to pioneers heading for the Yellowstone Area.  And in fact, the Washburn Expedition of 1870, which was credited for being the first expedition into Yellowstone Park, used Pilot Peak to guide them to the Grand Canyon of the Yellowstone and other fascinating areas such as the great geyser basins near Old Faithful.

These peaks are prominent landmarks of the Clarks Fork Valley, and are extremely photogenic. 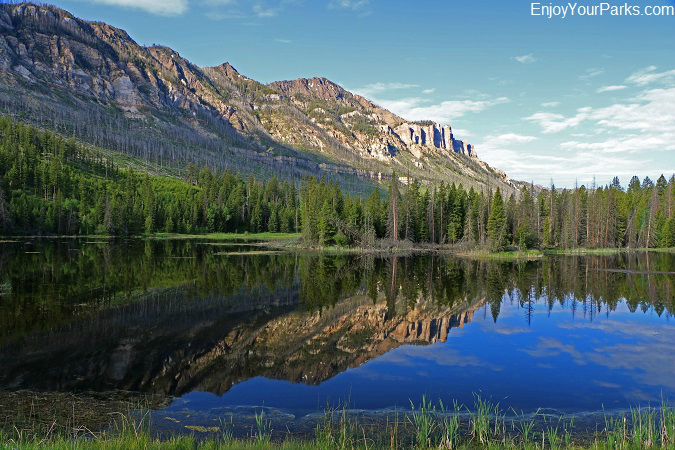 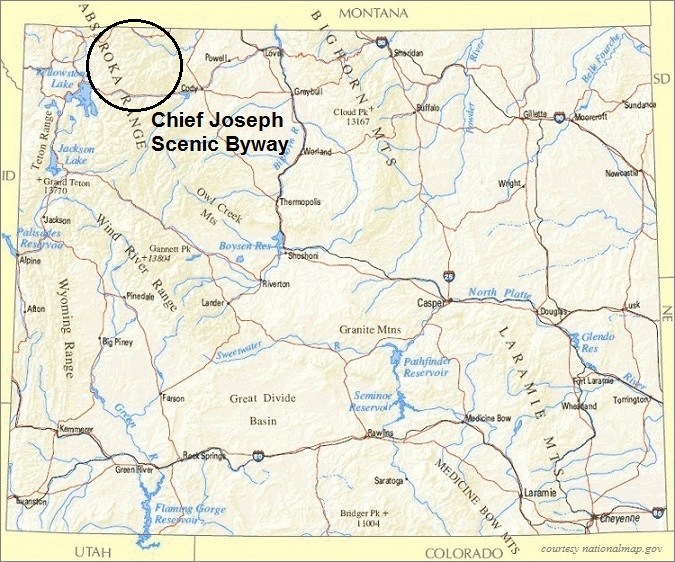