Devils Tower is America's First National Monument, and is one of the most unusual geologic structures found anywhere in the world. Located in the northeast corner of Wyoming, this incredible 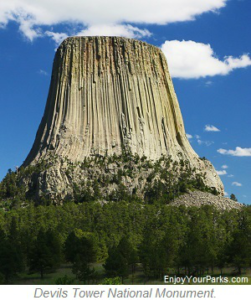 landmark rises out of the prairie into the sky, which makes every visitor who sees it ask the obvious question, "How in the world did this happen to form?"  In fact, it almost seems like it's not of this world because of it's strange and mysterious appearance.The Devils Tower National Monument was established by President Theodore Roosevelt in 1906, and is managed by the National Park Service. Rising 1,267 vertical feet above the northeastern Wyoming prairie above the Belle Fourche River, reaching a height of 5,112 feet, this iconic tower receives about 500,000 visitors each year and is without question one of Wyoming's premier attractions.

The 1977 movie "Close Encounters of the Third Kind" directed by Steven Spielberg and starring Richard Dreyfuss, used Devils Tower as the central focus of this blockbuster sci-fi movie.  This public exposure of Devils Tower dramatically increased the popularity of this national monument, and number of visitors coming to Devils Tower sky rocketed. 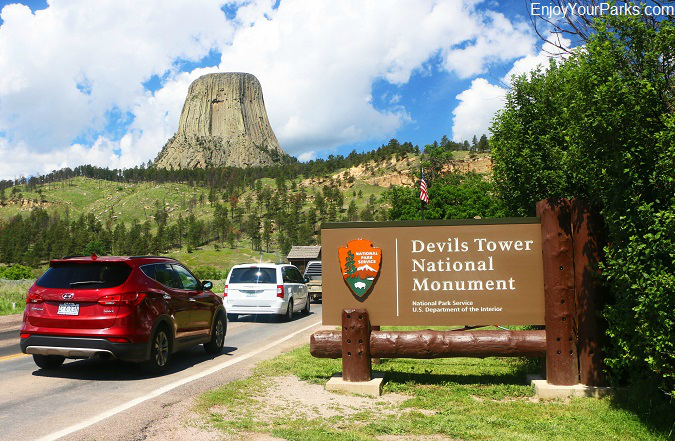 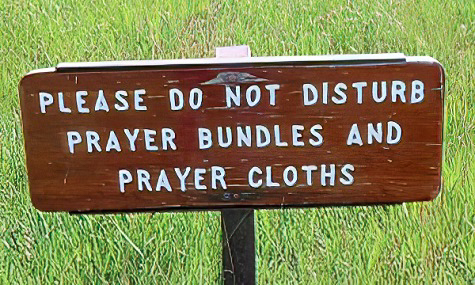 Because this is such a sacred place to so many Great Plains Indians, there is presently a proposal to change the name of Devils Tower to the Lakota name, "Bear Lodge" (Matȟó Thípila).  This proposal is now being considered by the United States Department of the Interior. 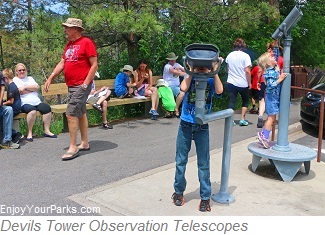 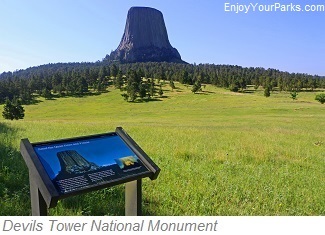 How "Bear Lodge" Came To Be

There are many Native American stories that tell of how Devils Tower, or "Bear Lodge", came to be.   One version is that two Sioux boys wandered far away from their village, and a huge bear named Mato saw 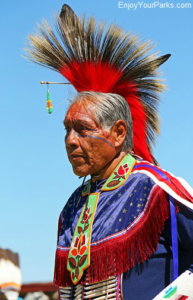 them and wanted to eat them.  As he approached the boys with claws as long as tipi poles, the boys prayed to Wakan Tanka the Creator for help.

The Creator indeed helped them... they rose into the sky on a huge rock.  Mato the bear tried to climb up the rock on all sides, leaving gigantic scratch marks on the walls of this great rock.  Matofinally gave up and rested just east of the Black Hills, where is now Bear Butte.  Then an eagle named Wanblee helped the Sioux boys off the rock and flew them back to their village.

According to the Cheyenne, Sweet Medicine brought Four Sacred Arrows to them, and were located inside a secret cave within the Devils Tower.  As Sweet Medicine lay dying in a hut below Bear's Lodge (Devils Tower), he told those around him of a very dark prophecy of the coming of the horse, the disappearance of the buffalo and their ancient ways. This is but one of the countless stories and legends involving Devils Tower throughout the Northern Plains Indian cultures.

History of the Name "Devils Tower"

On most maps between 1874 abd 1901, Bear's Lodge was the name for the present day Devils Tower. In 1875, Lieutenant Colonel Richard Dodge took a group of scientists, including the renowned geologist Walter  P. Jenny to the Black Hills of South Dakota to determine if the rumor of gold started by General George Armstrong Custer of the legendary Battle of the Little Bighorn.  Dodge wrote in his journal in 1875 that the local Indians called the tower "Bad God's Tower.  This is felt by many historians that this name may have been an error in interpretation of "Bear Lodge". Regardless, "Bad God's Tower" then quickly became "Devils Tower", and this name stuck. 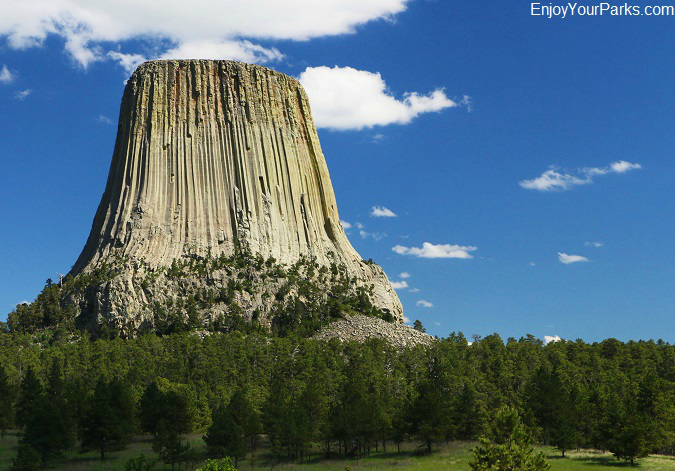 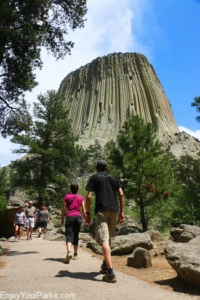 Exactly how Devils Tower was geologically form is still an ongoing heated debate among geologists, but the simplest explanation is this: Devils Tower is what is known as a "stock", which is a small body of molten rock called "magma" intruded into the earth's crust close to the surface about  55 million years ago. The hot molten magma  then cooled and crystallized into a rock composition called phonolite porphyry. As this type of rock cools, it develops the peculiar but typical hexagonal columns, that is found wherever this rock is found throughout the world, but the columns that formed the Devils Tower are much larger than typically found.  The term for this phenomenon is called "columnar jointing".

Devils Tower was not visible until erosion of the overlying sedimentary rocks occurred through the course of millions and millions of years. This erosion by wind and water is still occurring, and there is geologic evidence that Devils Tower was once taller than it is now, and eventually the entire tower will succumb to erosion, and completely erode away into nothing.

Seas retreated and advanced; landforms developed and eroded. New sediments were deposited. Approximately 50 to 60 million years ago, during Tertiary time, pressures within western North America climaxed, uplifting the Rocky Mountains and the Black Hills. At this time or shortly after, magma (molten rock) welled up toward the surface of the earth, intruding into the already existing sedimentary rock layers.

There are several wonderful trails found throughout the Devils Tower National Monument, including the "Tower Trail", which is a 1.7 mile long loop located at the base of the tower that takes hikers all the way around this amazing formation.  There is also a very nice Visitor Center, as the Bell Fourche River Campground for those visitors wanting to camp in this popular park. 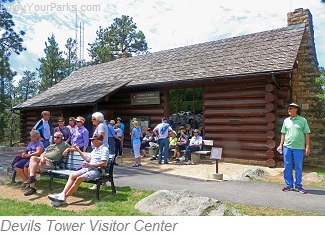 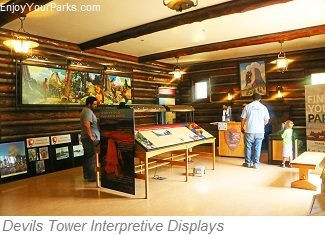 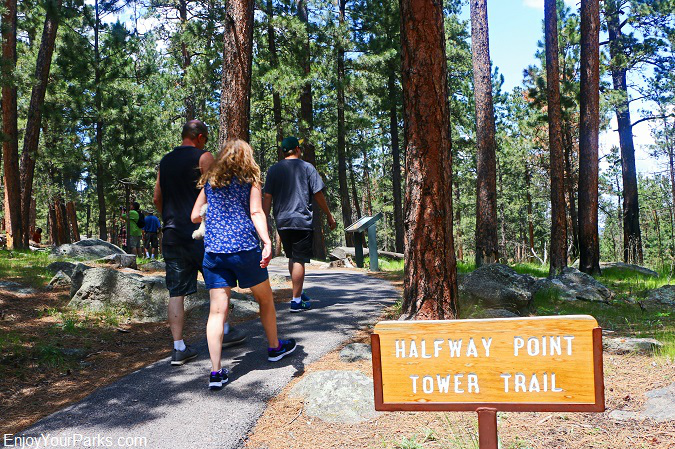 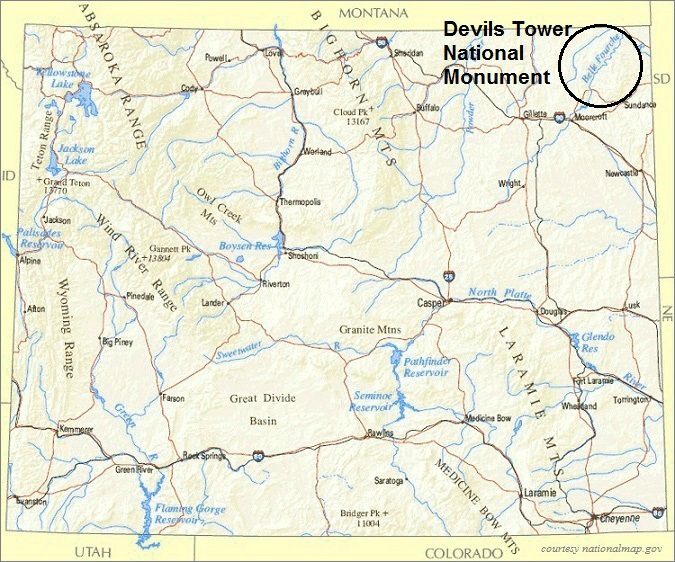