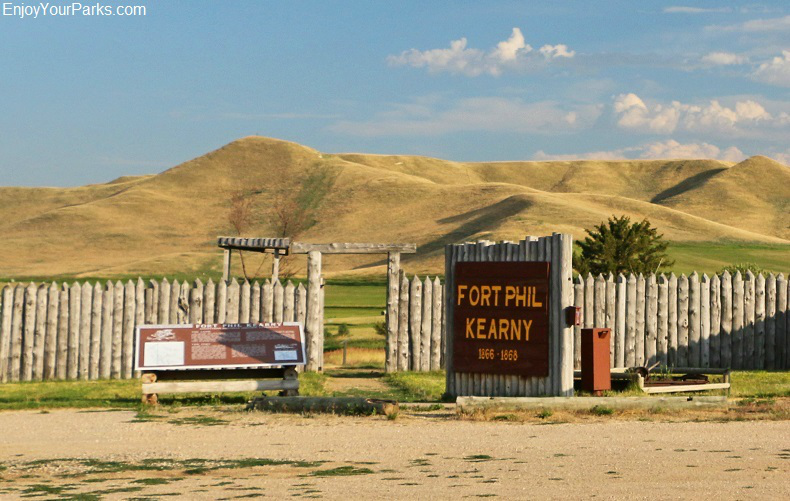 Known to the Indians as the "Hated Post on the Little Piney", Fort Phil Kearny was the site of a horrific massacre, where the Native Americans were the victors. Ten years before the famous Battle of the Little 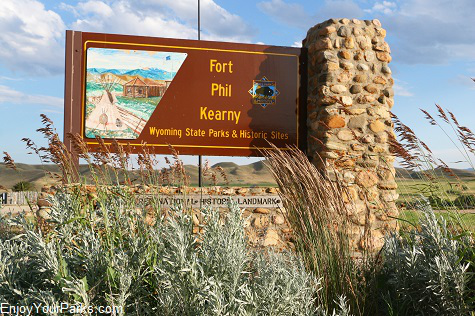 Bighorn in Montana, also known as "Custer's Last Stand", Fort Phil Kearny received a surprise attack by the Cheyenne, Arapahoe and Lakota Indian Tribes that decimated the fort and left it's survivors to bury 81 men in December of 1866.

Located only 15 miles north of Buffalo, Wyoming, just off exit 44 of Interstate 90, Fort Phil Kearny State Historic Site is conveniently located on the way for visitors heading for Yellowstone Park, Mount Rushmore or the Little Bighorn Battlefield.  Nestled along the east side of the magnificent Bighorn Mountains, Fort Phil Kearney State Historic Site includes an Interpretive Center, and provides self-guided tours of the fort grounds and outlying historic battles.  Within three miles of the Interpretive Center are the sites of historic battles of the Fetterman Massacre and Wagon Box Fight. 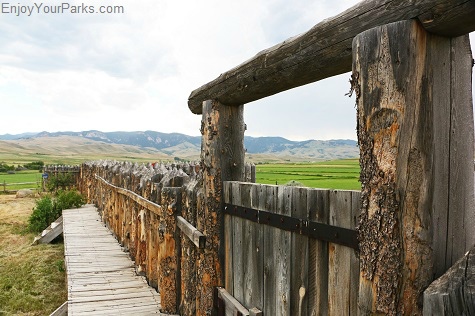 Along with Fort Reno and Fort C. F. Smith, Fort Phil Kearny was built along the Bozeman Trail in what is known as "Powder River Country" during the height of the Indian Wars to help protect miners traveling north from the Oregon Trail to the gold camps in present day Montana via the Bozeman Trail.

Fort Phil Kearny was the biggest of the three stockaded forts along the Bozeman Trail. There were 8 foot high thick log walls that enclosed a 17 acre area.  The longest walls were about 1,500 feet long. The entire perimeter of Fort Phil Kearny was nearly 3,900 feet in length, and it took over 4,000 logs to cover this large area.  The construction of Fort Phil Kearny began on Friday July 13th in 1866.  The post was named after Major General Philip Kearny, who was a well-known figure in the American Civil War. Additional construction occurred a year later in 1867, which included over 606,000 board feet of lumber and 130,000 bricks made of adobe. 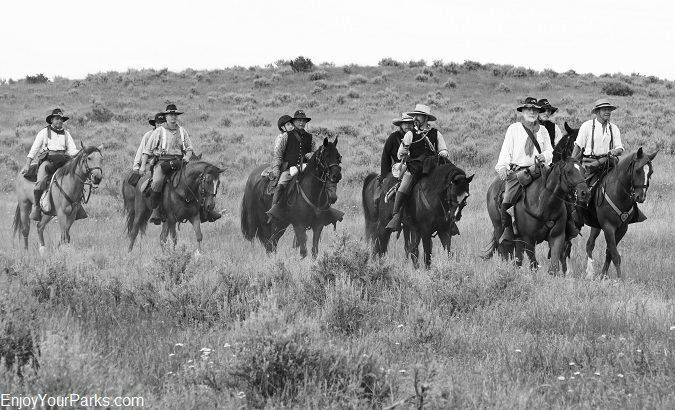 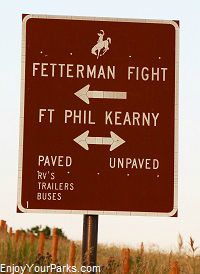 What triggered the building of Fort Phil Kearny, Fort Reno and Fort C. F. Smith, was the advancement of Colonel Henry B. Carrington into the Powder River Country in June of 1866.  Carrington was in charge of 700 troops and 300 contracted civilians, and he made his way into the Powder River Country from Fort Laramie in pursuit of Cheyenne, Arapaho and Lakota Indians.  His mission was to protect pioneers who were traveling on the Bozeman Trail heading to the gold camps of Montana.  Carrington established three forts along the Bozeman Trail, and designated Fort Phil Kearney to be the main headquarters.  In December 1866, Fort Phil Kearney was almost completed, and nearly 400 troops and 150 civilians were stationed there at that time.

The Fetterman Massacre, also known as the Fetterman Fight or the Battle of the Hundred Slain, was an epic battle during Red Cloud's War on December 21, 1866. This battle occurred after about 50 smaller 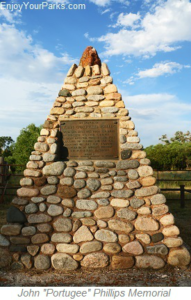 attacks by the Indians against troops  stationed at Fort Phil Kearny while the fort was being built.  The bloody fight occurred between the Cheyenne, Lakota and Arapaho Indians, and 81 soldiers of the United States Army who were stationed at Fort Phil Kearney.  Led by Captain William J. Fetterman, the battle occurred just a few short miles from Fort Phil Kearney, and all 81 men were killed by the Indians.  This battle was the worst military disaster ever seen on the Great Plains during that time.

Interestingly, Captain William Fetterman had no experience fighting Indians, but was very critical of Colonel Carrington’s defensive posture.  He boasted, “Give me 80 men and I can ride through the whole Sioux Nation!”  Well, he and 80 of his men were killed at the Fetterman Fight.

The Indians who fought at the Fetterman Massacre had only a few guns.  They mainly used bows and arrows, clubs and spears.  Of the 81 soldiers killed, only six had died of gunshot wounds.  It is felt by many historians that Fetterman may have shot himself just before the Indian Brave by the name of American Horse slit his throat.  By all accounts, the site of the aftermath was chilling, as wagons came to retrieve the bodies later that afternoon.

In less than six months, including the Fetterman Massacre, Carrington’s number of casualties at Fort Kearny reached a total of 96 soldiers and 68 civilians. However he still had over 300 soldiers within the fort, but no one could argue things were not going as planned.  Part of the reason for their high casualty numbers were the fact that they had a limited number of horses, limited number of trained cavalrymen, and because of their slow-to-reload Springfield Model 1861 muskets.  These guns were basically muzzle-loaders, which proved to be quite ineffective during an attack. 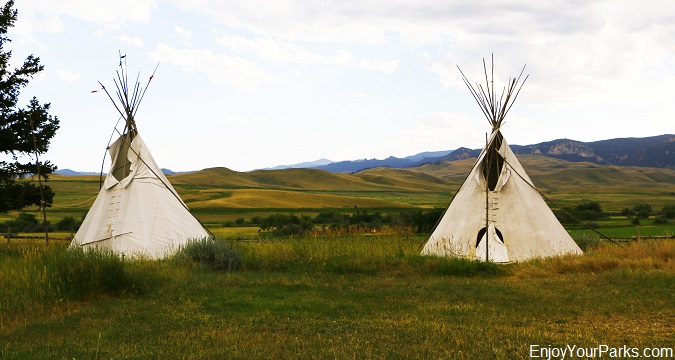 The Wagon Box Fight occurred near Fort Phil Kearny on August 2, 1867, during Red Cloud's War.  This fight was between several hundred Lakota Sioux Indians and 26 United States Soldiers and 6 civilians. The 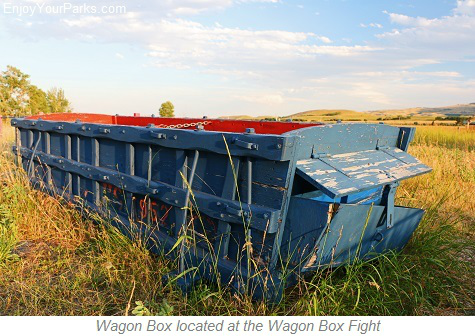 civilians were cutting hay and cutting wood near a corral several miles from Fort Phil Kearny, and these civilians constructed a fortress at this corral made up of 14 wagon boxes to protect themselves in case of an attack.  Captain James Powell and 26 soldiers were stationed their to protect these civilians as they performed their contracted tasks.

To be brief, hundreds of Lakota Sioux charged the corral on August 2, 1867, and these soldiers were able to fight off the Indians by hiding behind the wagon box fortress.  However, besides the effectiveness of their make-shift fortress comprised of wagon boxes, much of their success during the Wagon Box Fight was attributed to the use of their new, faster shooting rifles known as the Springfield Model 1866 Rifle.
Led by Captain James Powell, the Wagon Box Fight was the last major engagement of Red Cloud's War and was the last large-scale attack by Crazy Horse ever led against whites again. 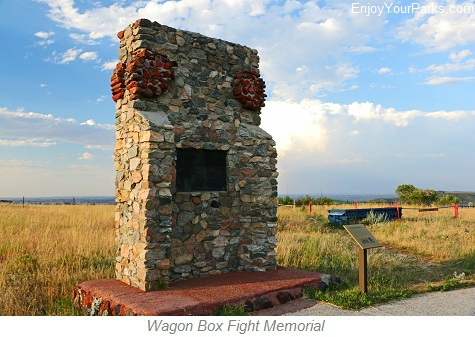 Powell realized that bows and arrows could not defeat the new faster shooting rifles. Powell estimated that he and his men killed over 60 braves during the Wagon Box Fight, but historians dispute this number, and feel it was much lower in reality. 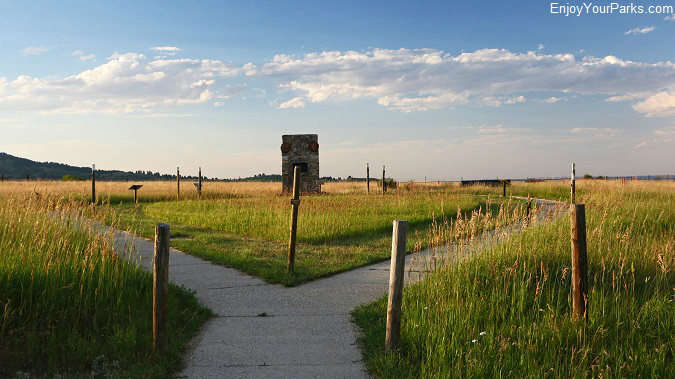 End of an Era: The Railroads

By 1868, the three forts along the Bozeman Trail in the Powder River Country became obsolete because the Union Pacific Railroad had extended far enough west that pioneers could reach the gold camps of Montana via railroad rather than trail.  All three forts, including Fort Phil Kearny, were abandoned, in part by the Treaty of Fort Laramie, and there were then burned to the ground by the Cheyenne Indians.  The "Hated Post On The Little Piney" was no more. 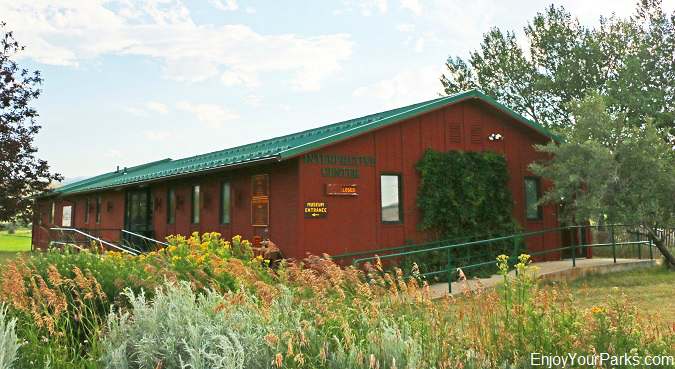 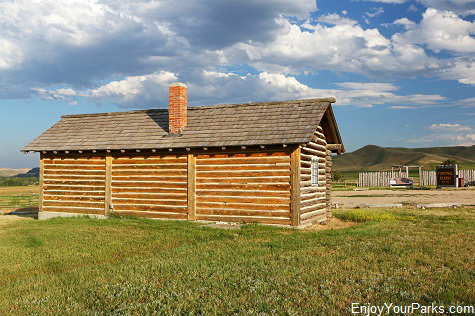 The Fort Phil Kearny State Historic Site is known by the Lakota Indians as “The Picnic Basket”, because of its rich history, incredible scenery and plentiful wildlife.  There are three major interpretive locations found on over a thousand acres. There is an outdoor exhibits guide and trail that takes visitors to all of the historic sites, as well as a nature trail which works its way through the shady trees of Lower Piney Creek.

The Interpretive Center is the centerpiece of the Fort Phil Kearny State Historical Site. This very well done visitor center provides interesting exhibits, a bookstore, gift shop, videos and offers self-guided tours of the fort grounds and surrounding historic sites… including where the Fetterman Massacre and Wagon Box Fight occurred.  Both of these battle sites are within 3 miles of the visitor center, and both have monuments erected and fascinating interpretive signs to help visitors understand what actually occurred here. 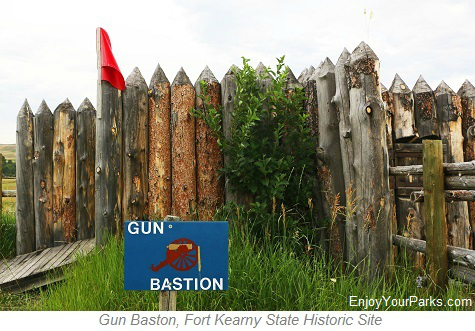 The tour shows visitors the archaeological remains of Fort Phil Kearny’s buildings, and a cabin built by the Civilian Conservation Corps (CCC)is located on the grounds to represent the quarters of a non- commissioned officer, which is quite interesting. The tour, if you choose, continues on to the outlying battles of the Fetterman Massacre and Wagon Box Fight, and visitors can go to the exact locations of these famous battles, where interpretive signs will explain what occurred here.Fort Phil Kearny State Historic Site’s Interpretive Center does a fantastic job narrating the incredible story of Fort Phil Kearny.  It accomplishes the difficult task of recreating the engagements and battles, the life of a soldier at that time, and the life of Indians living during this turbulent period.   All of this rests in the shadow of the magnificent Bighorn Mountains of Wyoming, and is truly a wonderful treat for all who are fascinated by western history. 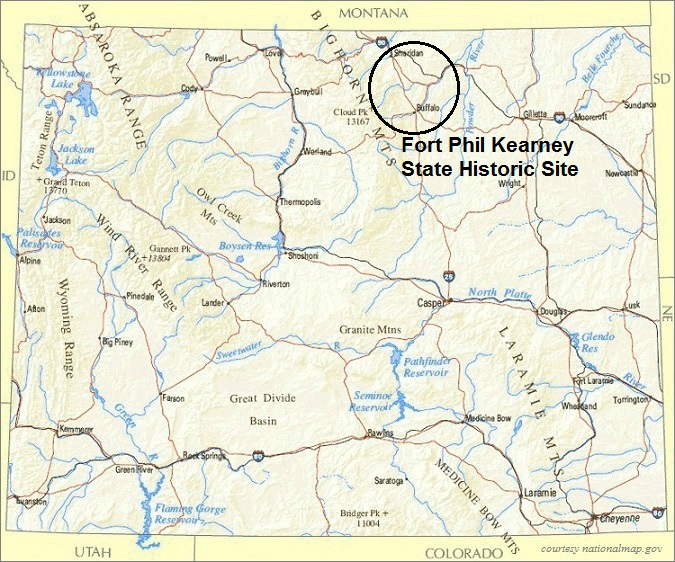