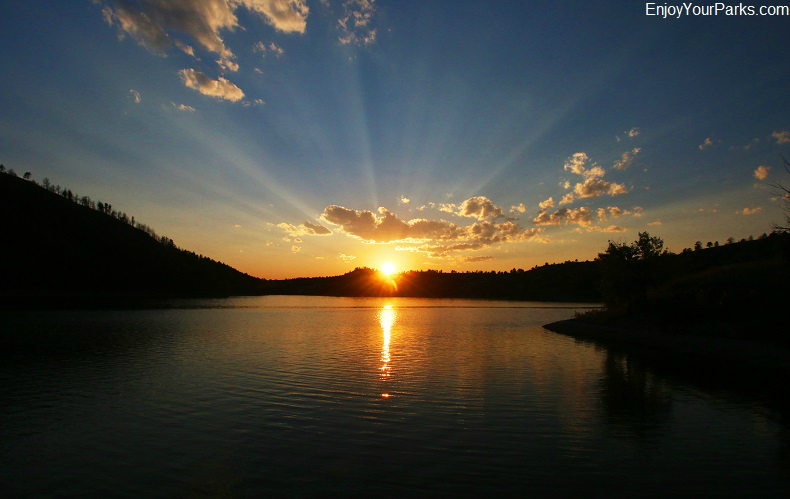 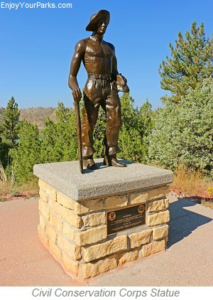 Built in the 1930s, these historic buildings are made of stone, logs and iron, and became the prototype for the entire nation's recreational areas surrounding the reservoirs and dams of the Bureau of Reclamation.

Guernsey State Park was the nation's first cooperative project between the National Park Service, Civil Conservation Corps and the Bureau of Reclamation, and it's tremendous success became the template for all future facilities throughout the country.  The architecture is known as "Rustic Architecture", which is based on simplicity of design, and using native building materials. 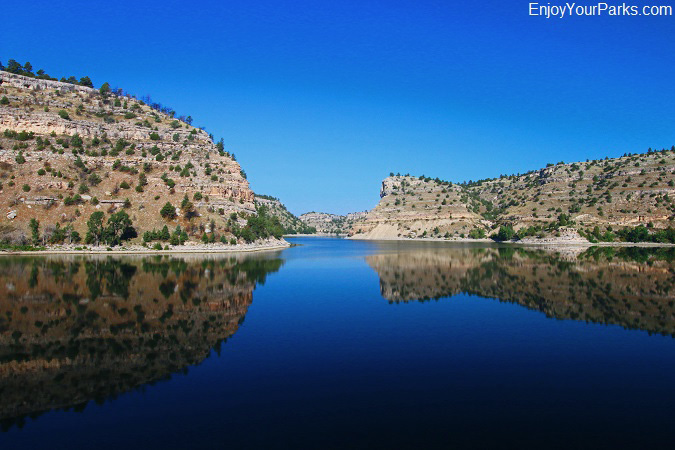 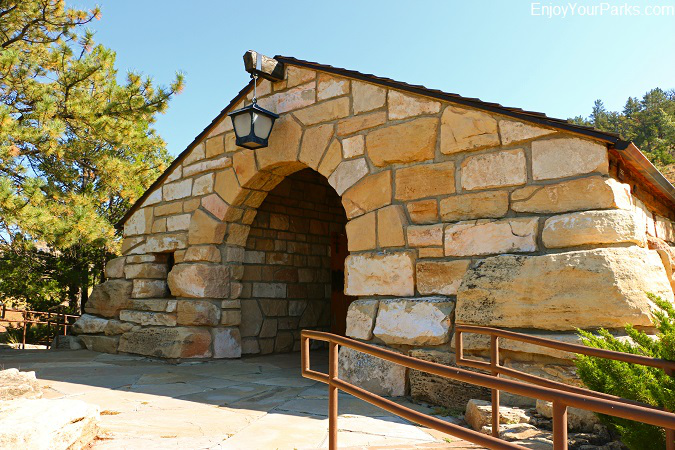 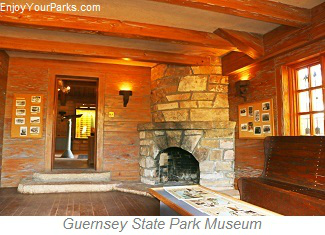 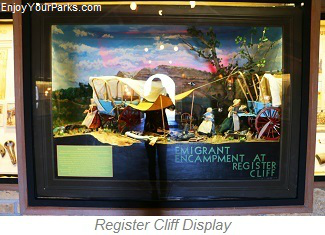 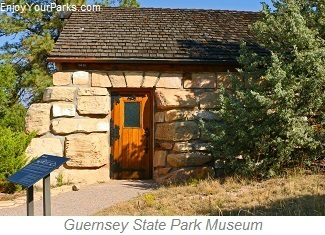 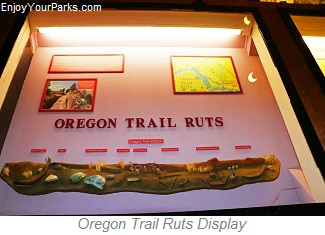 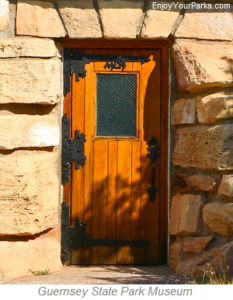 The Guernsey State Park Museum building was built in 1937, and its displays have remained essentially intact and unchanged ever since.  Therefore as you walk through this amazing museum, you are literally walking back in time!

Built with stone and masterfully crafted with hand-hewn timbers and hand forged iron, it's astonishing just how perfectly this historic museum "fits" with it's natural surroundings. 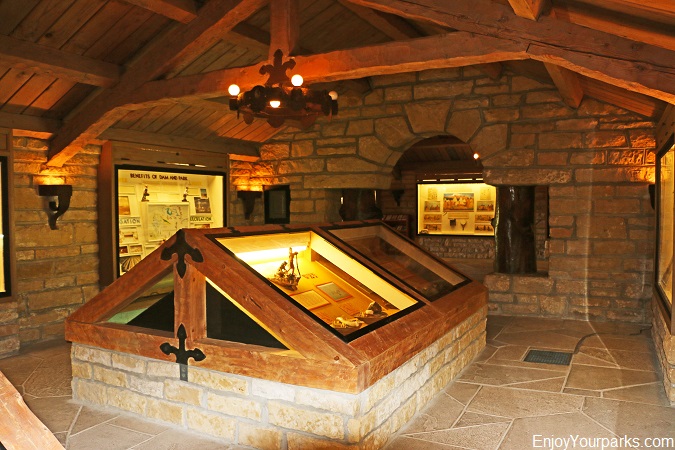 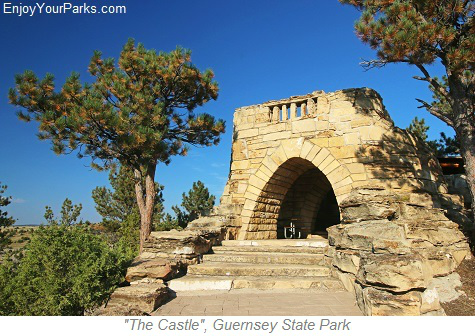 In addition to the Guernsey State Park Museum as an example of the fantastic "Rustic Architecture" produced by the Civil Conservation Corp of the 1930's that is now a historic national treasure and is now registered as a National Historic Landmark, "The Castle" is definitely another incredible example of the phenomenal work by the CCC in this historic park.

The Castle is built of stone, and has a huge fireplace and wonderfully winding stone steps that take visitors to an incredible observation area overlooking the park. Architects around the world are impressed on how "The Castle" perfectly blends and "fits" in its natural surroundings. 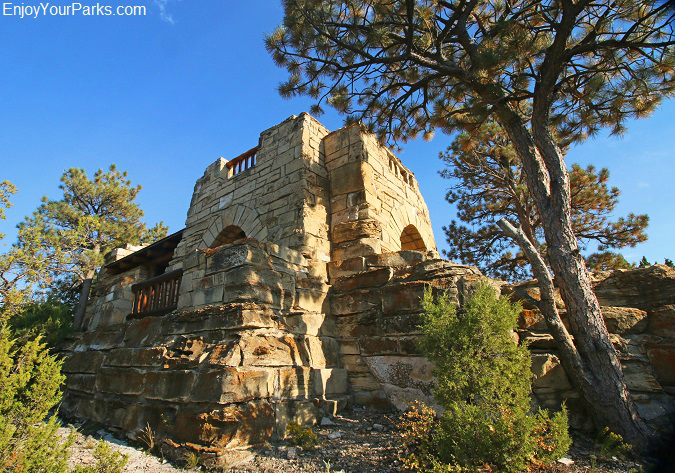 The Castle" is a classic example of the CCC's "Rustic Architecture" found in Guernsey State Park.

Sitting high above Guernsey Reservoir, Brimmer Point provides astonishing panoramic views of the park, and really is a "must see" while visiting Guernsey State Park.  From Brimmer Point, there are also approximately 10 miles of the original CCC trails that were built in the 1930s, and are a wonderful place to hike and enjoy the beauty of the area. 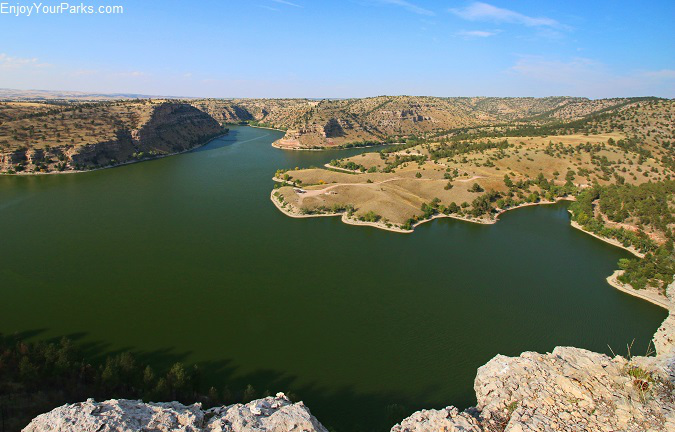 This is a view from Brimmer Point in Guernsey State Park of Wyoming. 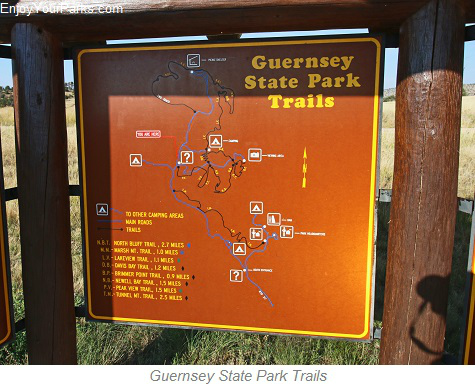 There is an extensive trail system available at Guernsey State Park.  This network of trails were initially planned and built by the CCC during the operation of the CCC camps.  These trails have become a major  feature at the park, as visitors find them very enjoyable and provide stunning scenery and vistas. The trail system begins at Brimmer Point Turnoff, and they consist of a series of loops that give hikers great views of the surrounding area, as well as the Guernsey Dam and Guernsey Reservoir.

Guernsey Dam and Guernsey Reservoir...
The Bureau of Reclamation built a number of dams on the North Platte River, including the historic Guernsey Dam that was built in 1927.  It is a two generator power plant has an historic and classic arch gatehouse.  The Guernsey Dam controls river flow to help with irrigation for farmers and ranchers, as well as serves as an electric power plant.  The Guernsey Dam is 135 feet high and was designed originally to hold about 74,000 acre feet of water, however this volume has been reduced due to silt deposits. The reservoir is a popular place for many water sports such as boating and fishing, and is enjoyed by many visitors throughout the summer season.

The Boulder Pass Trail follows the north shore of Kintla Lake all the way to the Kintla Lake Campground (Head) in 6.3 miles.  The trail has a few hills to attempt to tire you out, but for the most part the trail is fairly level.  As you get closer to the campground, you will begin to see the monstrous Kinnerly Peak emerge to the southeast, across the lake.  This giant matterhorn is a icon of the remote Northern Wilderness of Glacier National Park, and you'll get to see this great peak for nearly the entire hike to the east side of Boulder Pass.

There are seven campgrounds located inside Guernsey State Park. 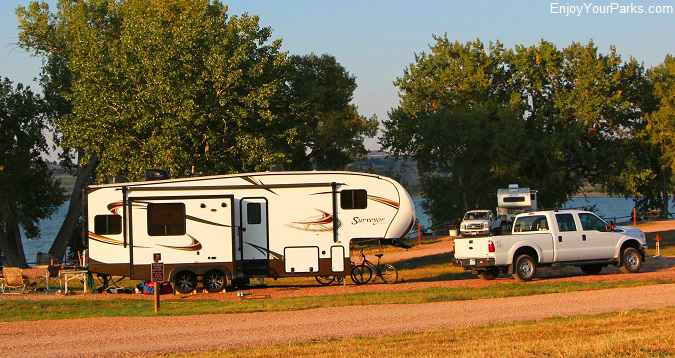 Register Cliff State Historic Site is another close by "must see" while visiting this area.  Thousands and thousands of pioneers heading West along the Oregon Trail carved their names into a large sandstone cliff.  This place was where the wagon trains would rest for a few days before making their way up to South Pass as they crossed the Continental Divide.  While they rested, they had plenty of time to carve their names into the stone... and thus left their mark for the ages.  We highly recommend that you spend some time here...you'll be very glad you did!  For all the details on the Register Cliff State Historic Site, CLICK HERE. 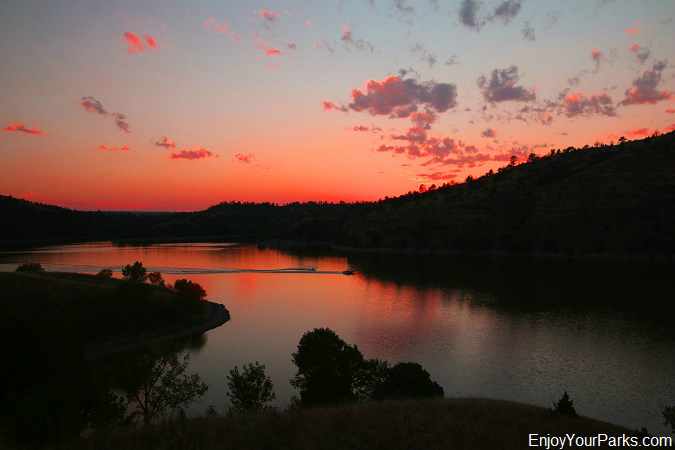 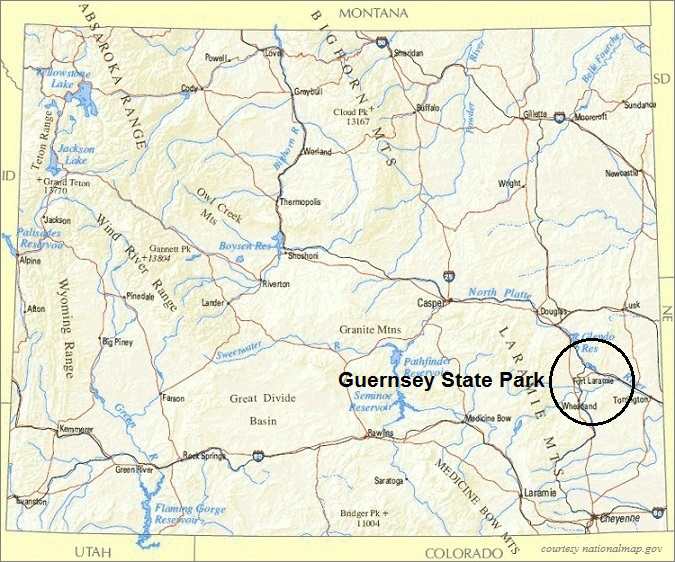