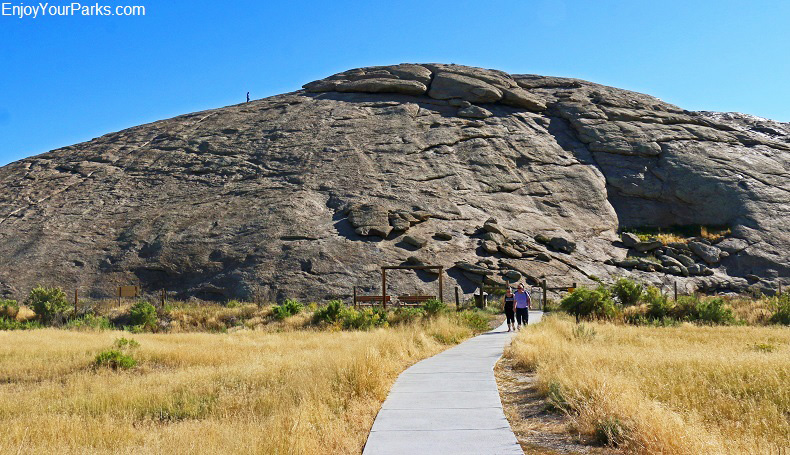 "Register of the Desert" 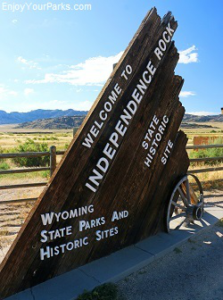 Independence Rock National Historic Landmark was named "The Register of the Desert" by Father Peter DeSmet in 1840 after he saw the many names carved into this large dome-shaped granite monolith.  And this name proved to be very appropriate as nearly a half a million emigrants heading into the Western Frontier then passed by this historic landmark between 1843 and 1869 along the Oregon Trail, California Trail, Mormon Trail. Another historic trail known as the Pony Express Trail also passed by Independence Rock.

Located along Wyoming Highway 220, about 50 miles southwest of Casper Wyoming, Independence Rock State Historic Site is a National Historic Landmark and is also a Wyoming State Historic Site.  Part of the Granite Mountains of Wyoming and located along the Sweetwater River, Independence Rock rests at the southeast end of this mountain range and is about 130 feet high, 1,900 feet long and 850 feet wide.  Thousands of pioneer names are carved into the rock...many of them part of the Great Westward Expansion, and the historical significance of these signatures and of this area in general is profound.

About the Name "Independence" Rock 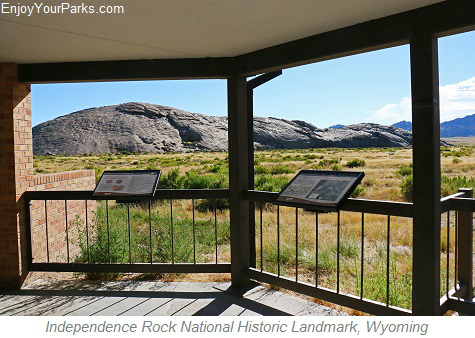 This historic rock became known as Independence Rock because emigrants taking wagon trains from the Missouri River,usually leaving by early spring, had to reach this important rock landmark along the Oregon
Trail, California Trail and Mormon Trail before July 4th (Independence Day) if they were to make it over the Rocky Mountains before winter.

The rock was unofficially named "Independence Rock" by William Sublette in 1830, and the name stuck.  Each 4th of July, weary travelers who reached this important landmark would have a big celebration as they knew that their wagon trains were on schedule to cross over the Rocky Mountains before the first winter snow storms would hit the mountains.

John C. Fremont, a Civil War hero, famous explorer and politician, camped one mile below Independence Rock on August 1st, 1843, and made this entry in his journal: "Everywhere within six or eight feet of the ground, where the surface is sufficiently smooth, and in some places sixty or eighty feet above, the rock is inscribed with the names of travelers. Many a name famous in the history of this country, and some well known to science, are to be found among those of traders and travelers..." 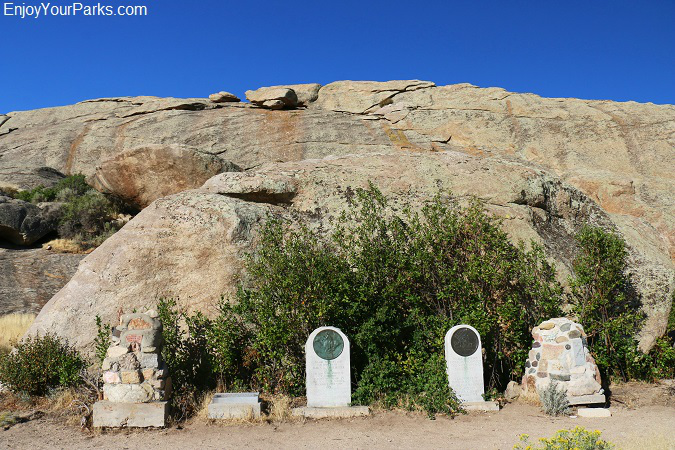 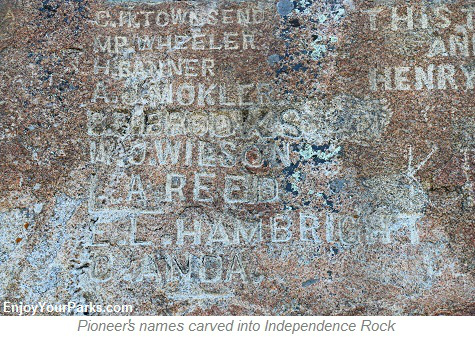 About the Pioneer Names Chiseled into the Rock 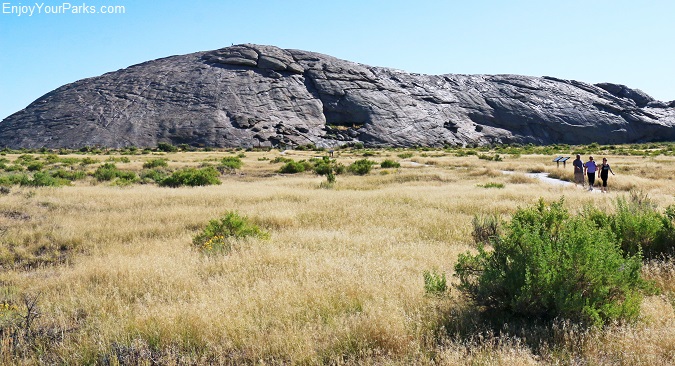 There is a foot trail that takes visitors all the way around Independence Rock, and is a fascinating journey into the past as you walk around this historic rock.  The Independence Rock Trail is a loop that is approximately one mile in length.  This is an extremely enjoyable walk and we highly recommend it. 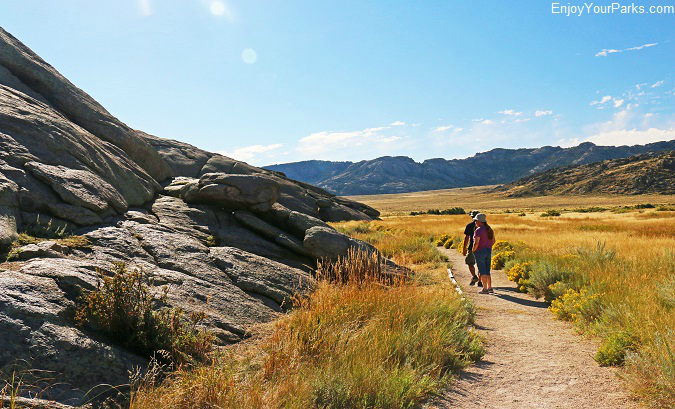 Independence Rock Trail is a one mile long loop that wraps around the rock.

The history that unfolded at Independence Rock is hard to wrap your arms around...so much was happening, and so much significant history was being made here during this incredible time in U.S. History. It gives many of the present-day Independence Rock visitors chills up and down their spines as they learn about what occurred at this remarkably historic place.

Views from the Top of Independence Rock: 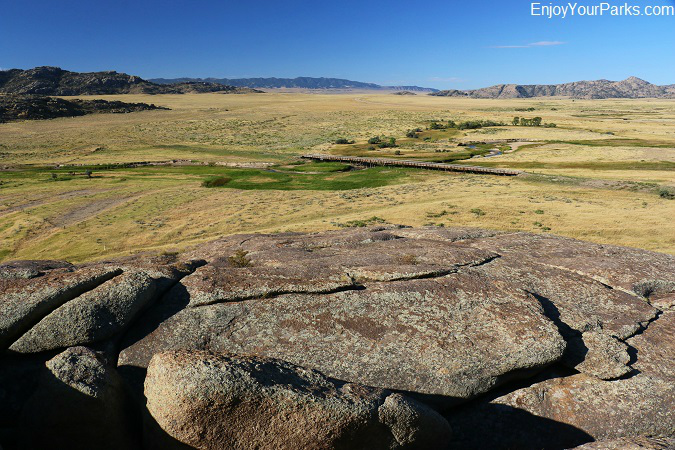 View from the top of Independence Rock in Wyoming. 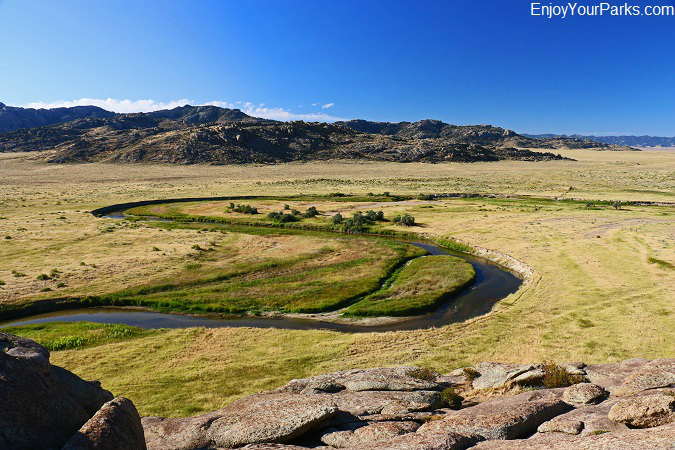 View of Sweetwater River from the Top of Independence Rock in Wyoming. 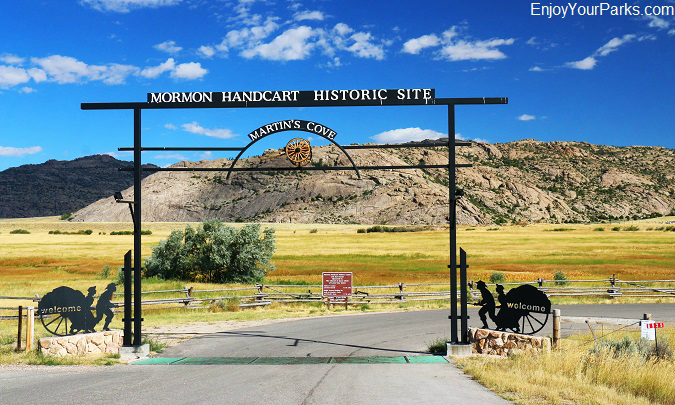 Mormon Handcart Historic Site with Martin's Cove in the background. 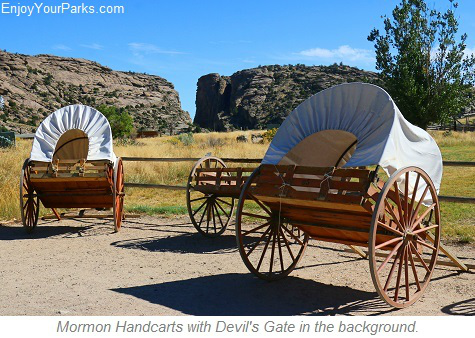 The history of Martin's Cove is a fascinating part of this amazing area.  Located about 3 miles southwest of Independence Rock, Martin's Cove is located on the Mormon Trail and is also part of the Oregon Trail known as the North Platte-Sweetwater segment.  Listed on the National Register of Historic Places, Martins Cove is where 576 Mormon emigrants who were part of the Martin Handcart Company, were stranded for 5 long days in Martins Cove by frigid temperatures and heavy snow.

These Mormon emigrants started their journey on July 28, 1856 which was dangerously late in the season, and this late start resulted in a disaster.  Even though the exact number of Mormon emigrants who died at Martin's Cove is unknown, more than 145 members of the 576 members of the Martin Handcart Company died before reaching their Salt Lake City destination.  A rescue party helped the Mormon emigrants, or the number of deaths would have been much higher.  Near the actual Martin's Cove is the Mormon Handcart Historical Center, which is an interesting place to explore and learn about the fascinating history of the area that includes not only Martin's Cove, but also the historic Devils Gate.  The Mormon Handcart Historic Site is located on the historic Sun Ranch, which as founded in the 1870s by a French-Canadian by the name of Tom Sun, and is now leased from the Bureau of Land Management (BLM) by the LDS Church. 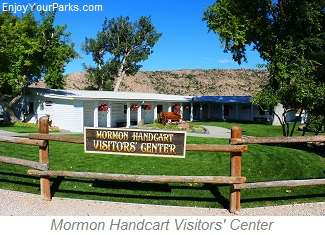 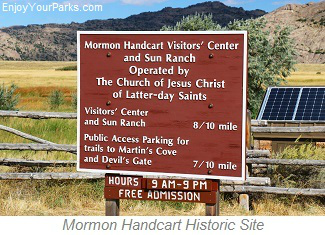 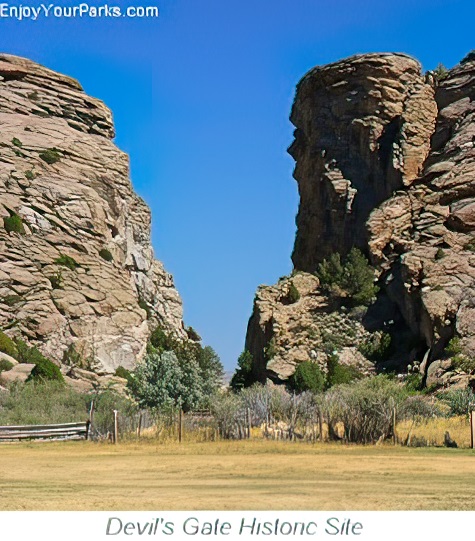 Devils Gate Historic Site is located just two miles southwest of Independence Rock National Historic Landmark, and was a major landmark for travelers on the Oregon and Mormon Trails.

This fascinating natural rock formation is a 300 foot gorge found on the Sweetwater River.  Even though the actual historic trails did not pass through this narrow granite gap in the rock, Devil's Gate was incredibly important as a landmark for travelers, and was photographed in 1858 by Samuel Mills of the Captain Simpson Expedition. In addition, some of the members of the Mormon Handcart Company actually fled to a location near Devil's Gate to seek refuge from the storm.

Devil's Gate Historic Site can be accessed by a semi-improved hiking trail from the Mormon Handcart Historic Site, and also by a paved road that is an alignment of Wyoming Highway 220, and rests on public land.

Ok-A-Beh Marina near the Yellowtail Dam on Bighorn Lake. 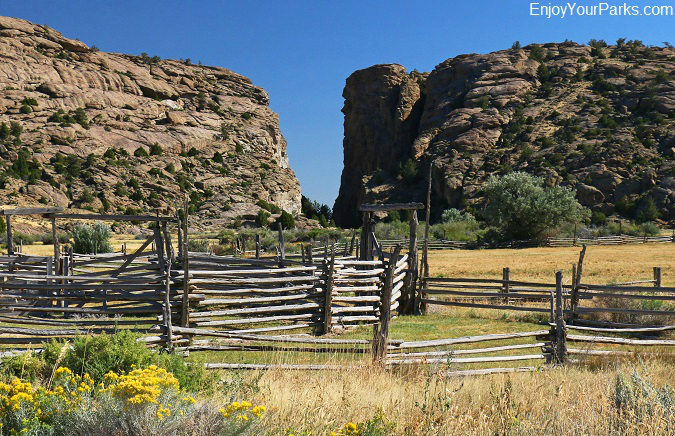 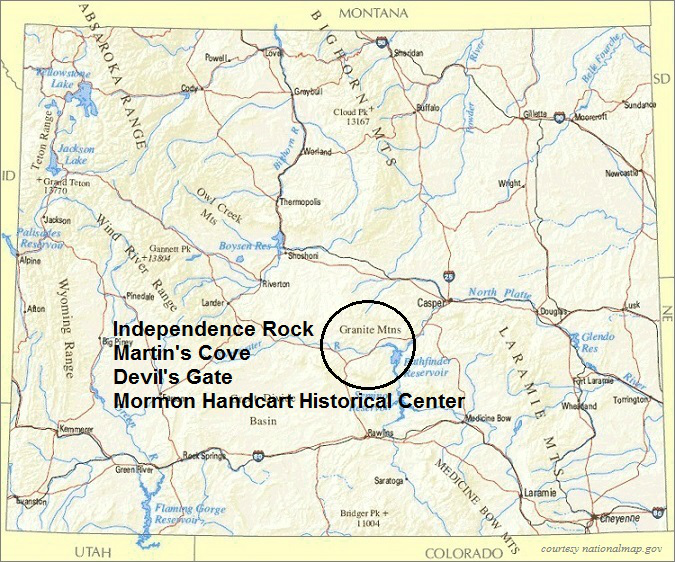