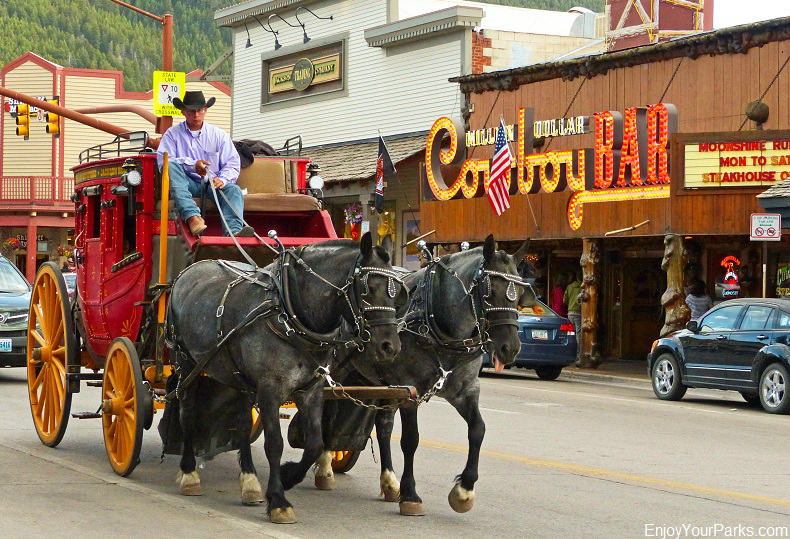 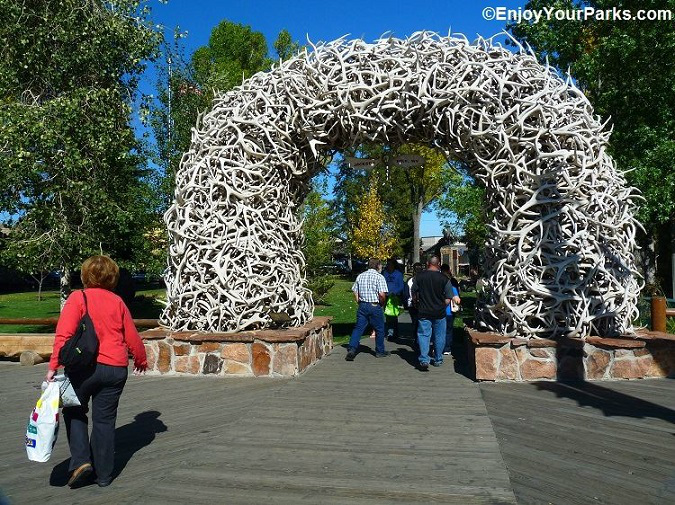 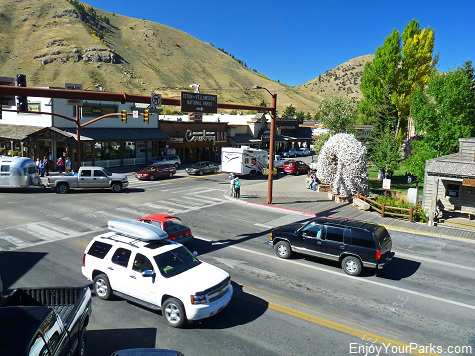 The town of Jackson Wyoming is commonly referred to as "Jackson Hole", which is actually the valley in which Jackson Wyoming is located.  The valley of Jackson Hole is referred to as a "hole" because it is a flat, low elevation area that is completely surrounded by mountains on all sides.  "The Hole" is about 48 miles long and about 8 miles wide, which covers approximately 400 square miles.

Located just west of the Continental Divide, Jackson Hole is where the headwaters of the mighty Snake River is found. Surrounding Jackson Hole are many mountain ranges, the most famous being the Teton Mountain Range that is located in Grand Teton National Park, just north of the town of Jackson.

With all this being said, technically the town should be called "Jackson" and the valley in which the town rests should technically be referred to as "Jackson Hole", but if you call the town "Jackson Hole", that's just fine too and is entirely acceptable.  Of the 9,000 or so people who call Jackson home, 99.999% of them won't correct you, and in fact many of them also refer to Jackson as "Jackson Hole" or "The Hole". 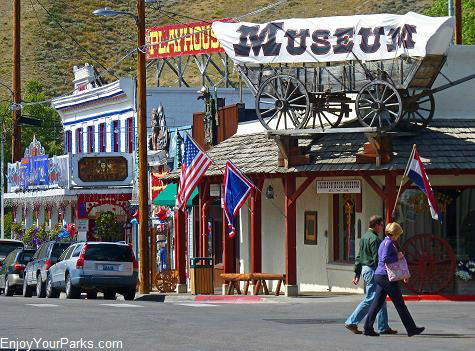 There is so much to see and do in and around Jackson Wyoming that it's almost overwhelming. Jackson Wyoming is the hub of everything that this amazing area encompasses. Besides the obvious activity of seeing and exploring Grand Teton National Park, which is unquestionably one of the most scenic National Parks in the world, there is also amazing white water rafting south of Jackson in the legendary Snake River Canyon, as well as world-class downhill skiing at Jackson Hole Mountain Resort.

Snow King Resort is located right in Jackson, and is also a popular ski resort.  The National Elk Refuge is located just north of Jackson where visitors can see thousands of elk during the winter months and even take sleigh rides through the refuge so as to get up close to these gorgeous animals.  There are also several outstanding museums and galleries throughout the Jackson area such as the National Museum of Wildlife Art.

Jackson Wyoming is also home to some of the best shopping and dining in the west, as well as a tremendous selection of outstanding lodging opportunities.  Some of the best fly fishing opportunities in the West can be found just outside Jackson, mainly on the legendary Snake River.... and there are a large number of the incredibly historic and fantastic Dude Ranches that are among the best in the entire country... all a stone's throw from Jackson.  And the hiking and mountain climbing opportunities throughout the area are world-class and seemingly endless. 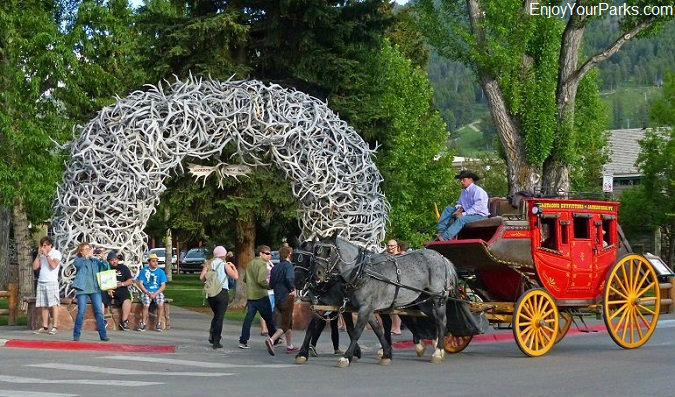 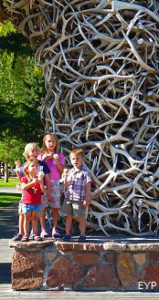 The fabled "Jackson Square" rests in the center of Jackson Wyoming, and is a wonderful little park that is shaded by large cottonwoods and evergreens.  On each corner of Jackson Square are the world renowned "Elk Antler Arches" that greet all who enter the park.  These arches are made entirely of elk antlers that were "shed" in the winter at the National Elk Refuge.  You see, elk "shed" their antlers every winter, and therefore there is an abundance of elk antlers... enough to build 4 large elk antler arches and much much more.  In fact, every year the Boy Scouts of America collect these antler "sheds" that are located at the National Elk Refuge sell them to raise money for the organization.

The town, valley, and the massive Jackson Lake located in Grand Teton National Park, are all named after mountain man David Jackson, who was a trapper in Jackson Hole in the early 1800s, but prior to the influx
of mountain men into the valley, Jackson Hole was originally occupied by Native American tribes that included the Blackfeet, Bannock, Gros Ventre, Crow and Shoshoni.

One of the first white men to enter Jackson Hole was John Colter during the winter of 1807 -1808.  John Colter was a part of the Lewis and Clark Expedition of 1804-1806,  and while on the return journey, he was
granted permission to leave the expedition to go and explore the Yellowstone-Teton Area because of the amazing rumors they heard about this wondrous land to the south. Jackson Hole soon became a prime location for fur trapping, and many legendary mountain men traveled through the Jackson Hole Area 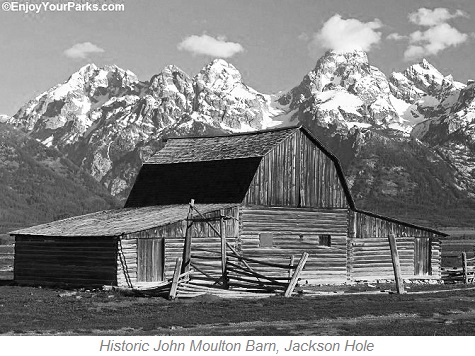 during the early 1800s.  Some of the famous names included Jim Bridger, Jedediah Smith, William Sublette and David Jackson.  David Jackson spent the winter along the shores of Jackson Lake, and named the lake after himself.

During the Hayden Expedition of 1871 -1872, a photographer by the name of William Jackson took the very first photographs of the Yellowstone and Teton areas. These photographs, as well as sketches made by Thomas Moran, helped convince congress to designate the Yellowstone area as the world's first National Park in 1872. 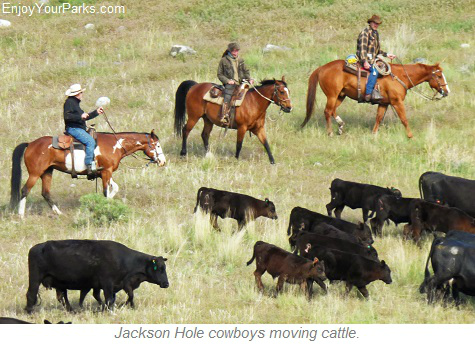 In time, ranching became king in Jackson Hole, and the "Era of the Cowboy" came to be.  In addition to working cattle ranches, there were also several Dude Ranches" that sprang up in the late 1800s and early 1900s to cater to the "Big City Dudes" who were visiting the area.

Many of these historic Dude Ranches are still in operation today. This rich cowboy heritage throughout the Jackson Hole Area is still very much alive and well today.  And through the years, some of the most famous western movies ever made were filmed in the Jackson Hole area, such as the iconic classic "Shane". 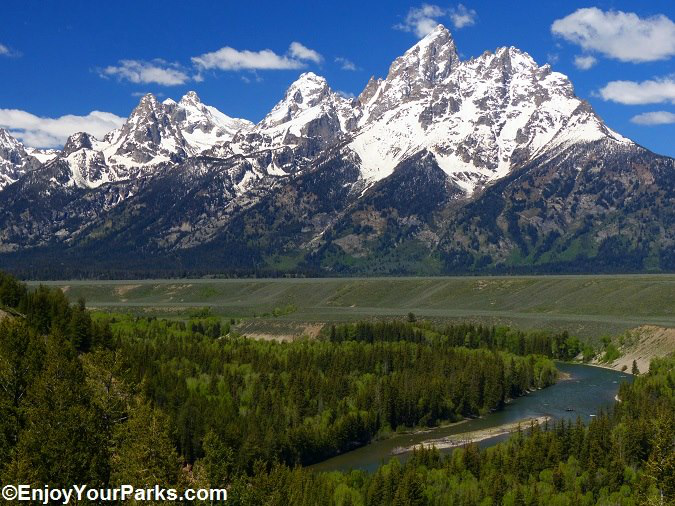 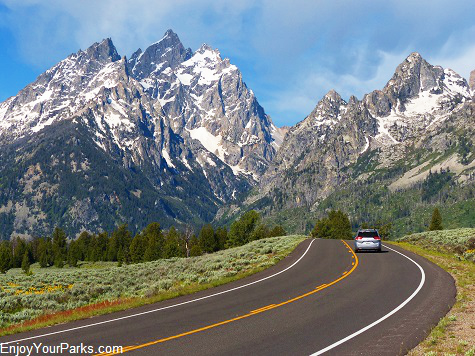 The Teton Mountain Range literally rises straight up from the valley floor, with absolutely no foothills obstructing the view. These jagged mountains are some of the most recognizable mountains on earth, and are a thrill to see.

There are several amazing lakes, such as the massive Jackson Lake, where visitors can enjoy outstanding water activities, all the while enjoying the gorgeous Teton Mountain Range that dominate the skyline.  The Snake River flows directly throughout the length of Grand Teton National Park, which provides river activities as well. And the wildlife viewing opportunities are among the best in the country.  We have built an entire section on our website devoted to showing visitors exactly where to go, what to do and where to see animals in Grand Teton National Park. 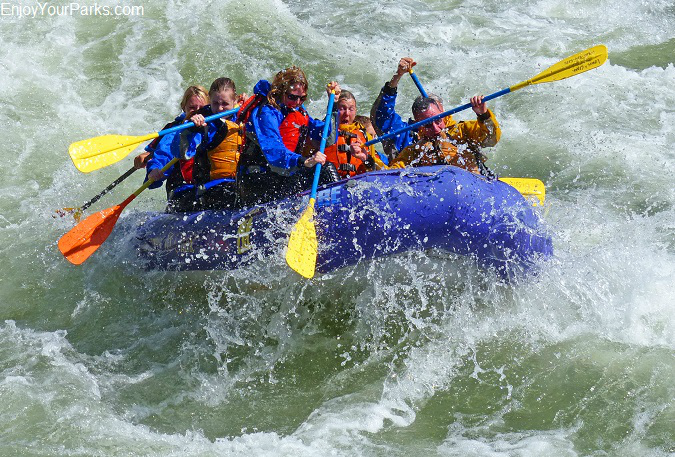 Whitewater rafters on the "Lunch Counter" rapids in the Snake River Canyon. 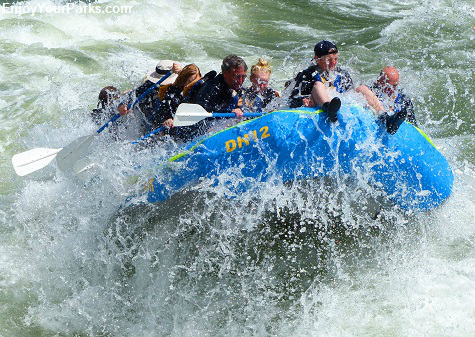 The stretch of the Snake River, that is known as "The Grand Canyon of the Snake", lies between West Table and Sheep Gulch and is where the best white water is found.

This stretch is a narrow channel that has several rock ledges that create outstanding Class III rapids.

Some of the most famous white water features includes "The Big Kahuna", "Lunch Counter", "Champaign Hole", "Three Oar-Deal", "Rope" and "Cottonwood". "The Big Kahuna" and "Lunch Counter" rapids actually have a parking area and observation deck for visitors to watch the rafts navigate the incredible white water found here. So if you don't care to actually get in a raft and take on this wild water, you can enjoy watching white water rafters at this popular pullout along the highway. 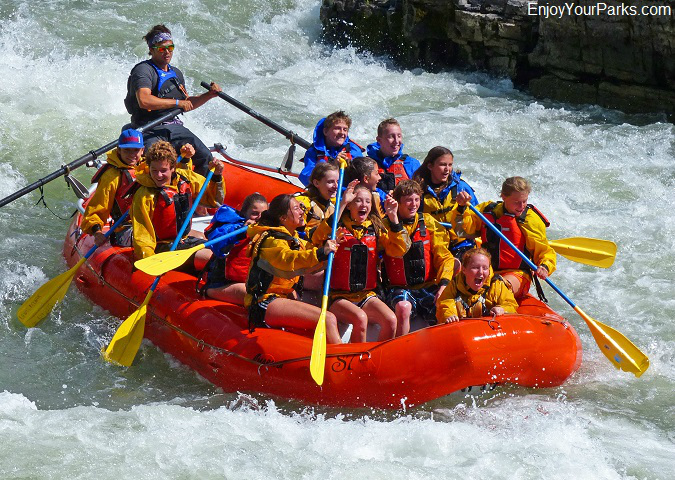 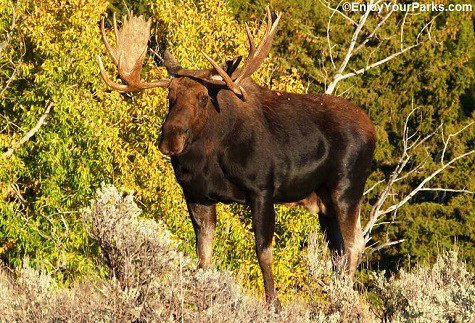 The Snake River also has many, many miles of much calmer water which is ideal for amazing scenic floats with jaw-dropping scenery in all directions.
And with this comes incredible wildlife viewing that you can't get anywhere else but on the river.  Visitors floating the Snake River will have opportunities to see moose, elk, black bears, grizzly bears, bald eagles, mule deer, whitetail deer, river otters, blue herons, Canada geese, white pelicans, trumpeter swans and much, much more!

Therefore these scenic river floats are extremely popular, and there are several outstanding river rafting companies that provide wonderful floats down this legendary river....some even inside Grand Teton National Park. 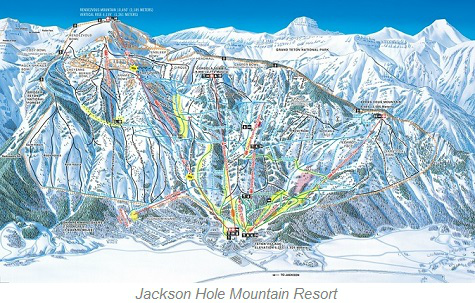 This popular ski resort boasts that it has one of the highest vertical gains in the country, just second to Big Sky Montana.  Snow King Resort is located literally in the town of Jackson, and is the original ski resort in the Jackson Hole Area.  The Snow King ski hill dominates the view to the south as you wander the streets of Jackson, as it rises directly above the town. Targhee Ski Resort is located further to the north on the west side of the Teton Mountains, near the small town of Alta, Wyoming. 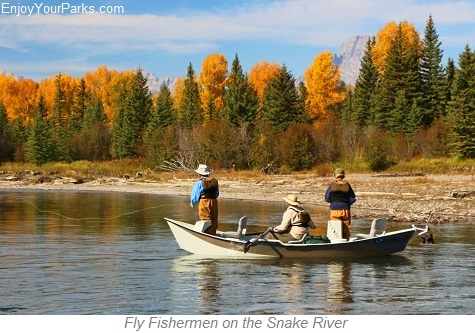 The Snake River provides outstanding fly fishing opportunities, inside Grand Teton National Park, and also many stretches of the Snake River to the south.

You will see many a drift boat floating down the Snake River with fishermen casting their flies to the fabled trout that live in these blue ribbon waters.   There are several terrific fly fishing guide companies that take visitors down this amazing river both north and south of Jackson Wyoming.

If you like to fly fish, you will absolutely love fly fishing on the legendary Snake River near Jackson Wyoming!

Located just north of Jackson Wyoming is the National Elk Refuge.  During the winter months, thousands of elk migrate out of the surrounding mountains, including Grand Teton National Park, and end up at this famous elk refuge where they will spend the winter.  Sleigh Rides are provided during the winter months for visitors to literally get in the middle of this huge elk herd, which is a thrilling experience. 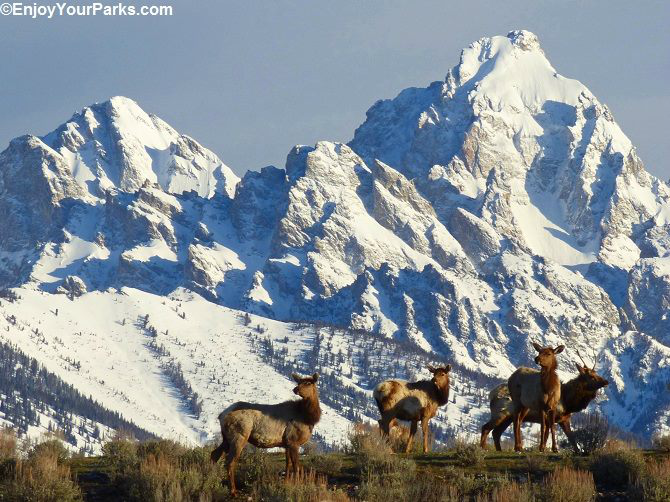 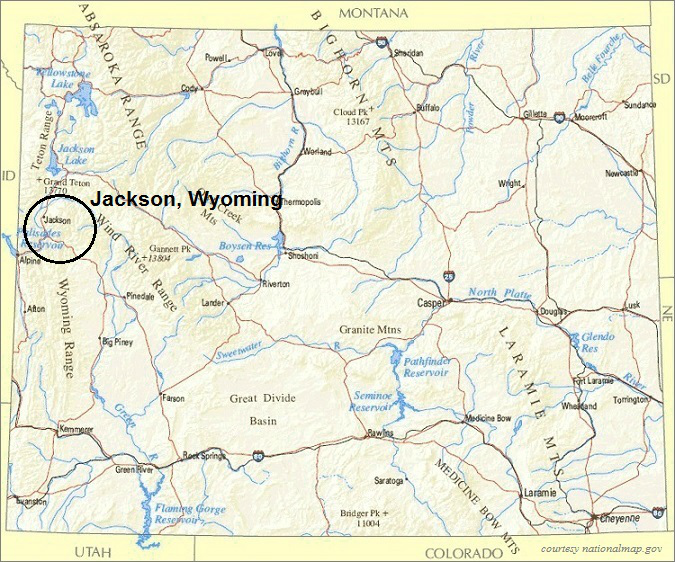