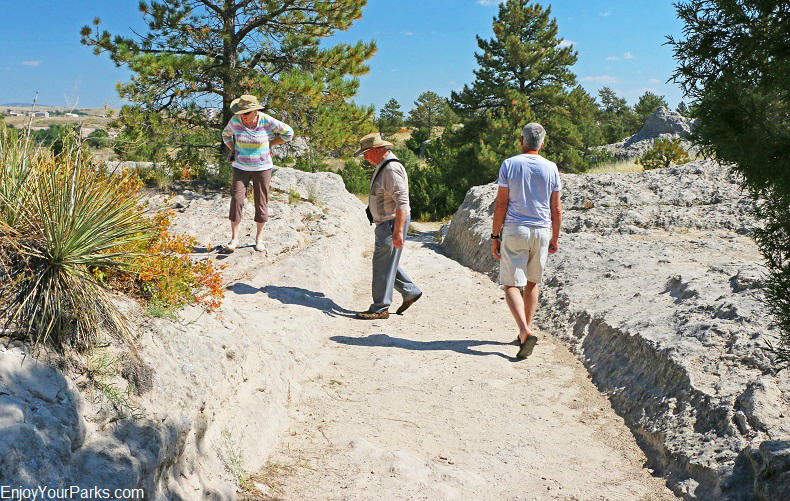 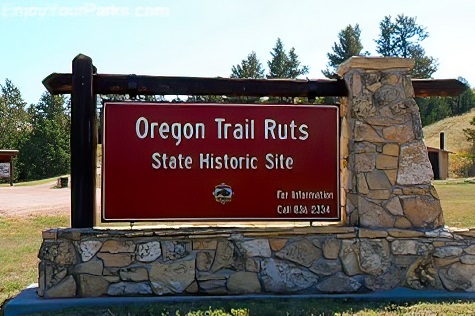 The Oregon Trail Ruts National Monument, also known as "The Guernsey Ruts", are the best preserved set of wagon train ruts found anywhere along the historic Oregon Trail.  Located one half mile south of Guernsey, Wyoming off Highway 26 near the North Platte River, the Oregon Trail Ruts National Historic Landmark is a fascinating display of the precise location where pioneers from the 1843 to 1869 crossed the Great American West on their way to Oregon and California.

These four-foot deep gouges that thousands upon thousands of wagon wheels cut through solid rock are forever preserved for present and future generations to witness and learn about these brave pioneers' trek through treacherous, uncharted wilderness.

Brief History of the Oregon Trail

In the year 1800, the western border of America only reached as far as the Mississippi River.  Just after the Louisiana Purchase of 1803 which nearly doubled the size of the country, Americans began to head west... beginning with the Lewis and Clark Expedition in 1804. 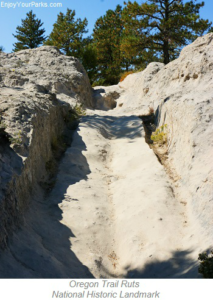 The path these brave explorers mapped out proved to be far too hazardous for pioneer families with wagons, so a far less difficult trail was needed. But one needs to keep in mind that the land that is now Oregon, Washington and a part of Idaho (known as "Oregon Country") was still owned by the British....


Then a fur trader by the name of Robert Stewart, who was a member of "The Astorians" who established Fort Astoria along the Columbia River near the west coast of northern Oregon, became the very first white man to use what would be known as The Oregon Trail.  This historic 2,000 mile journey occurred in 1810, and took 10 months.  Even though it was a very, very long distance, this route was far less treacherous and difficult than the route used by Lewis and Clark.

26 years after Robert Stewart's historic journey, in 1836 the first pioneers began their journey from Missouri to Oregon.  Led by Marcus and Narcissa Whitman, a small missionary party took their wagons on this new, less hazardous trail, soon to be known as The Oregon Trail, but were forced to leave their wagons just 200 miles shy of Oregon. Even so, they proved to the rest of the nation that wheeled travel was indeed possible, and so the great surge of settlers heading west was soon to begin.

Discovery of South Pass: Beginning of the "Great Westward Migration" 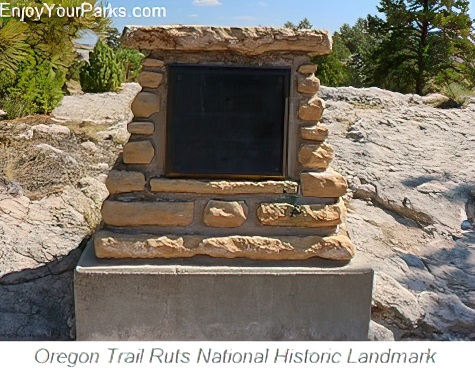 In early spring of 1836, a wagon train with about a thousand people left Independence, Missouri for Oregon, and were successful.  This marked the beginning of what is known as "The Great Westward Migration". One of the vital decisions that led to their success was the use of South Pass, which was a very wide valley that was truly the only feasible place to cross over the Rocky Mountains with wagons.

By the year 1846, thousands of pioneers traveled on the Oregon Trail to successfully reach Oregon. With this tremendous number of Americans now inhabiting the Oregon region, the British soon realized that the "Oregon Country" was no longer theirs.  So in 1846, they ceded this area to the United States. 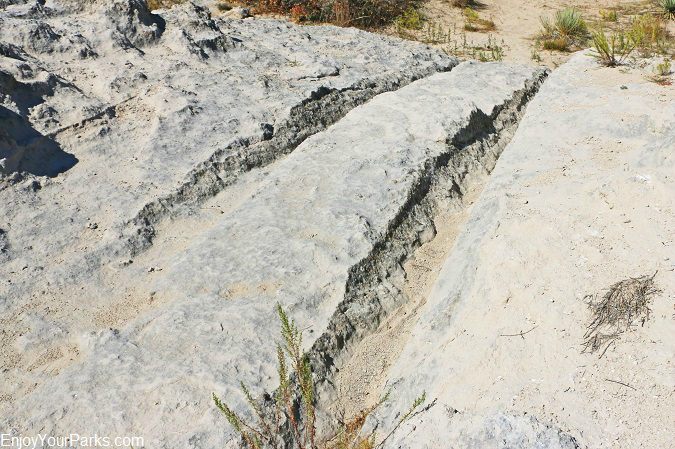 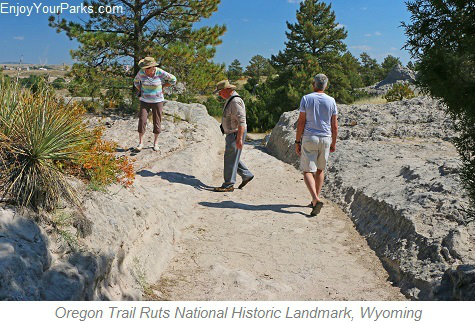 Knowing the history of the Oregon Trail, and the incredible historic significance of this famous trail used by hundreds of thousands of pioneers heading West in the 1840s through the 1860s, the Oregon Trail Ruts (a.k.a. The Guernsey Ruts) means much more than simply ruts carved into the rock there.

These ruts represent the westward movement of America, and is a memorialized symbol of the Great American Pioneer.

The westward expansion of America is one of the most significant historical events in American History, and these ruts... that you can touch and feel, brings it all to life.  We strongly feel that if you are interested in Western American History...then the Oregon Trail Ruts National Historic Landmark is a "must see" during your Wyoming vacation. 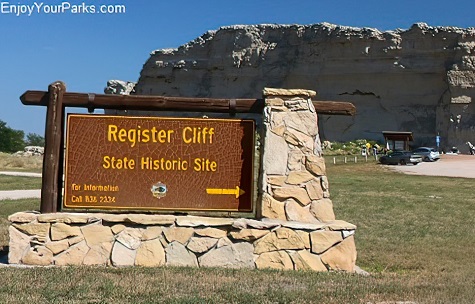 Register Cliff is a large, chalk-like outcropping that is 100 feet tall located along the Oregon Trail next to the North Platte River, located just a few miles east of Guernsey State Park.

Also known as “Register Rock” and “Sand Point Station”, thousands of pioneers on wagon trains on the Oregon Trail headed for the west coast stopped here and carved their names into this soft stone cliff.

One of the earliest names carved into the rock was in 1829, which was from a fur trader, but during the Great Western Migration that occurred between 1843 and 1869, thousands of pioneers on wagon trains would carve their names in this historic cliff as they headed west along the Oregon Trail.  Register Cliff is without question one of most significant “register rocks” along the entire Oregon Trail. 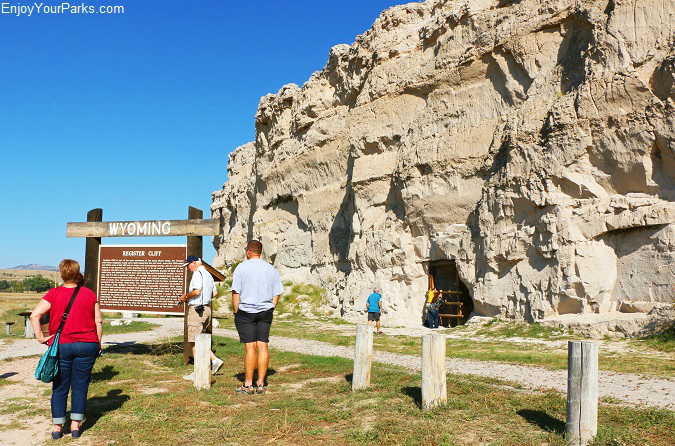 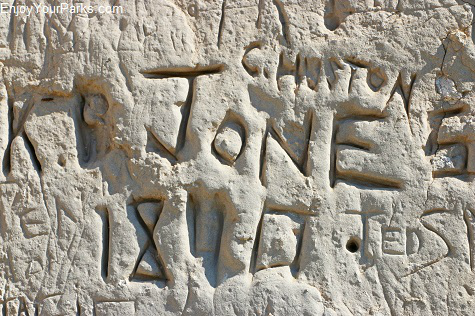 Register Cliff was in a perfect spot for both the pioneers and the livestock. Near the cliff were lush pastures, and the North Platte River at this location was ideal for the stock to drink.  Register Cliff was the first camp west for the pioneers after leaving Fort Laramie to the east, and they would usually rest for a day or two here…giving them plenty of time to carve their names onto the cliff wall.  And by the way, you still actually see the Oregon Trail just below Register Cliff.

Register Cliff State Historic Site was an important key navigational landmark listed in the 1800s Oregon Trail Guide Book, and is where thousands of pioneers chiseled their names onto the soft sandstone of the cliff wall. Register Cliff was also a vital checkpoint landmark for wagon train heading west along the Platte River, confirming they were on the correct path up to the ever-important South Pass, which was the only place where wagon trains could cross over the Rocky Mountains.

Register Cliff State Historic Site has pioneer names of not only travelers of the Oregon Trail, but also travelers who would later down the Oregon Trail split off and continue on the Mormon Trail or the California Trail.  An estimated 500,000 emigrants used the Oregon Trail from 1843 through 1869, and up to 1 in 10 died along this long, difficult journey…usually from disease.  These p 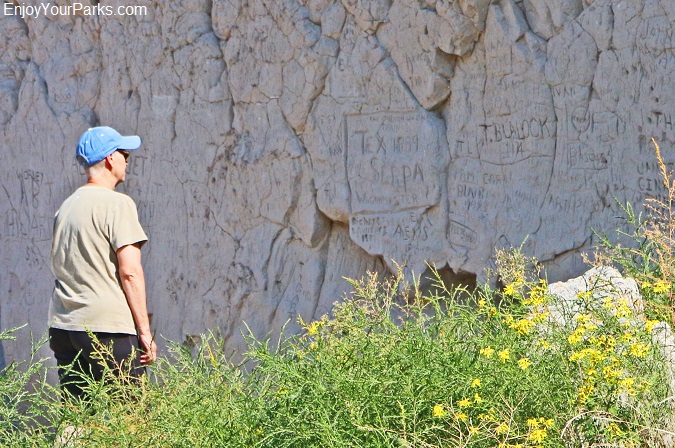 Register Cliff has thousands of pioneers' names carved into the rock.

Charles Guernsey, Cattleman
Charles Guernsey was a pioneer cattleman who built his ranch buildings just a short distance from Register Cliff in the 1890s.  The town of Guernsey and Guernsey State Park is named after this pioneer rancher. He operated his ranch until 1926, when he then sold it to Henry Frederick.

The cave at the base of the cliff was blasted for storing potatoes, and was later utilized for storing farm machinery.  In 1932, the Frederick Family donated a portion of the Register Cliff Historic Site to the State of Wyoming, with the request that it would be preserved as a memorial to the pioneers, honoring their spirit and accomplishments.

Register Cliff was later listed on the National Register of Historic Places in 1970.  The photo to the right memorializes this generous donation by the Frederick Family. 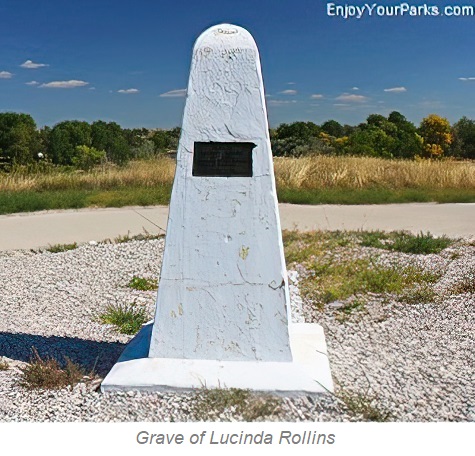 Located at the bottom of what is known as "Deep Rut Hill", resting above the Platte River across the highway, is the Grave of Lucinda Rollins.  It is believed that she started her journey from Dayton, Ohio, and passed away at this located sometime in June of 1849.

Lucinda was likely headed for California.  The cause of her death is unknown, as was many of the pioneers who died along this long and difficult journey.

In 1934, the large white obelisk was built by the Historical Landmark Commission of Wyoming, and dedicated it to "The Pioneer Women of Wyoming".   This is a fitting tribute to those brave pioneers who chose to cross the Great American West in search of a new life. The Lucinda Rollins Gravesite is very close to Register Cliff, and is well worth visiting during your visit here.

Approximately ten years later, in 1862, William Dalton, his wife Clara Dalton and all four of their children (Matilda, Alvin, Orrin and Margaret) joined the First Fisk Wagon Expedition at St. Paul Minnesota, and headed for Bannack, Montana, where gold was discovered just 4 months earlier.  One year later, in 1863, the Daltons moved to Virginia City, Montana where gold was recently discovered.  Both William and Clara died of Typhoid Fever in Virginia City in January of 1864. All four children survived this epidemic.
Click Here to read more about their story. 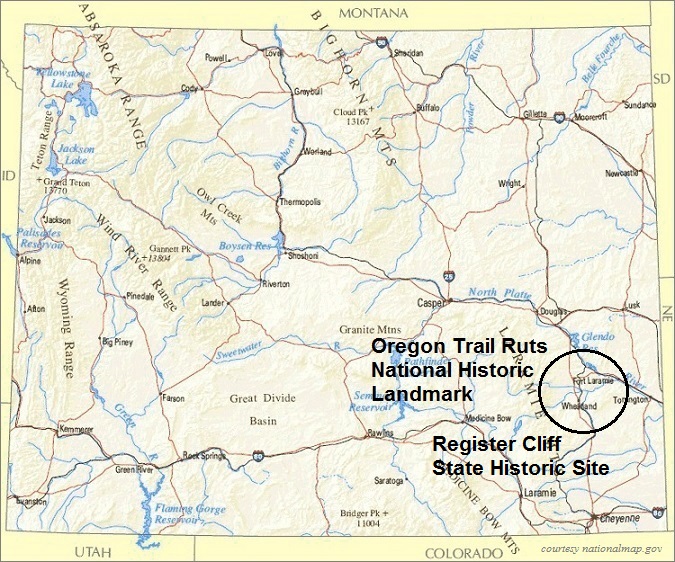