Glacier National Park Montana is known as "The Crown of the Continent" with good reason. Located in northwest Montana, Glacier Park offers some of the most breathtaking scenery in the world, as well as some of the best wildlife viewing and hiking opportunities found anywhere in North America.  Glacier Park is also the centerpiece of the largest intact ecosystem in the lower 48 states, which covers over 16,000 square miles, and is truly one of the most pristine landscapes found anywhere in the country.

Located in the northwest corner of Montana, Glacier Park is over a million acres in size, with over 175 named mountains, 762 lakes, 563 streams, over 200 named waterfalls, 25 named glaciers, and over 745 miles of maintained hiking trails.  And of the million acres that makes up Glacier National Park, over 94% of this vast expanse is managed as wilderness. 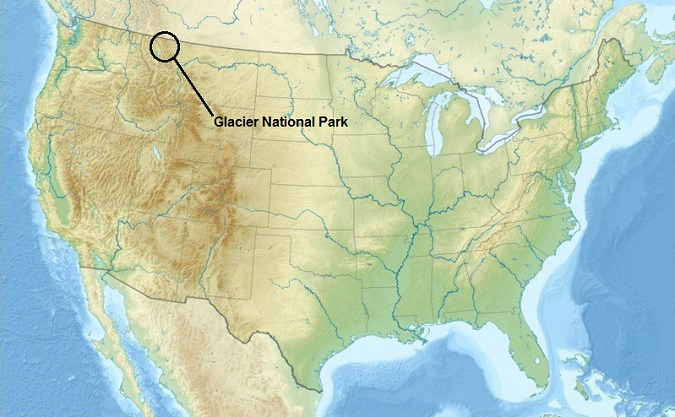 GLACIER PARK ENTRANCES
Total number of Glacier Park entrances: 2
St. Mary, Montana (east side)
West Glacier, Montana (west side)
(Note: These park entrances are on each end of the Going To The Sun Road)

GLACIER PARK PAVED ROADS
Total number of paved roads inside Glacier National Park: 3
Going To The Sun Road (53 miles)
Many Glacier Road (12 miles in length)
Two Medicine Road (7 miles)
Note: portions of Highway 2 along the southern border are within the park boundary,
but we do not consider them to be "inside" Glacier National Park. 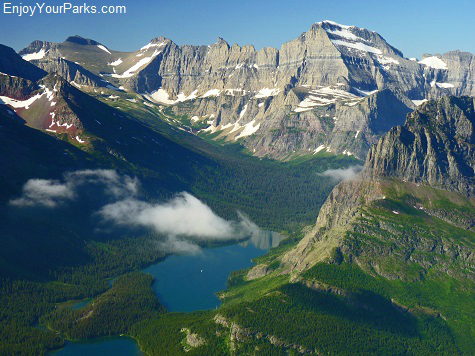 George Bird Grinnell named it "The Crown of the Continent" after exploring this untamed land in 1885 with the famous explorer and guide at that time by the name of James Willard Schultz.  After taking several more expeditions to the area, Grinnell became so inspired and impressed with the beauty splendor of Glacier Park that he spent over a decade attempting to preserve this pristine area.

Several other well-known adventurers were also discovering this remarkable landscape during this time period, such as Henry L. Stimson, who climbed the steep east face of the iconic Chief Mountain in 1892 with a Blackfeet guide accompanying him.

One of the most important events that helped the "Crown of the Continent" become your modern-day Glacier National Park, was the discovery of Marias Pass in 1891 by the Great Northern Railroad owned by railroad tycoon Louis Hill.  Marias Pass is located along the southern border of Glacier National Park, and this event was a major discovery because the Great Northern Railway now had a way to get large number of visitors to this area from both the east and the west.

On May 11, 1910, through the efforts of people such as George Bird Grinnell, Henry L. Stimson, and Louis Hill, President William Howard Taft signed the bill into law, officially making this pristine area in northwest Montana, Glacier National Park.

The Days of the Chalets 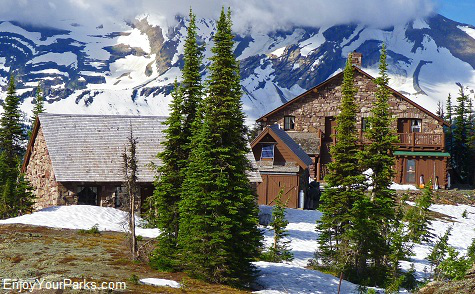 During the early years of the 20th century, the only way to see the park was to arrive by the Great Northern Railway, and take a horseback adventure from one Glacier Park Chalet to another.  You would be with large
group of people on this guided horse pack trip, and each chalet was strategically placed so you would eventually get to see most of Glacier National Park.  This entire trip took several weeks, but was the norm for that time.  In fact, the average Glacier Park visitor in 1915 spent over a month in the park, and often times two months.

There were 9 original chalets built between 1910 and 1913 by the Great Northern Railway, which included the Belton Chalet, St. Mary Chalet, Going To The Sun Chalet, Many Glacier Chalet, Two Medicine Chalet, Sperry Chalet, Granite Park Chalet, Cut Bank Chalet and Gunsight Chalet.  The only chalets that remain are the Sperry Chalet and Granite Park Chalet, which are still open for guests.  The Belton Chalet is privately owned and is located just outside the Glacier Park boundary at West Glacier, Montana.

Located in Flathead County and Glacier County of the state of Montana, the northern border of Glacier National Park Montana is shared by Waterton Lakes National Park in Alberta Canada, as well as the Flathead Provincial Forest and the Akamina - Kishinena Provincial Park in British Columbia.  The North Fork of the Flathead River forms the west boundary of Glacier Park, and the Middle Fork of the Flathead River forms much of the southern boundary.  Most of the eastern boundary of Glacier Park is provided by the Blackfeet Nation Indian Reservation.   The closest "city" to Glacier National Park is Kalispell Montana, which is about 60 miles south west of the west entrance to Glacier Park. 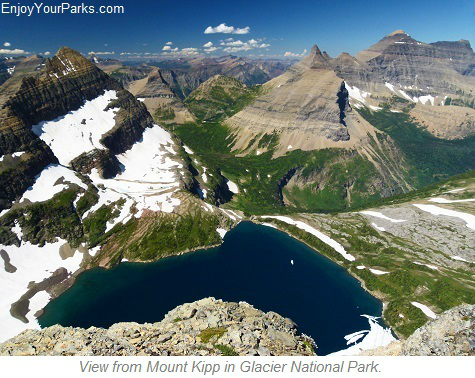 In time, mighty valley glaciers began to cut away at this exposed sedimentary rock through a series of ice ages, the last being only 10 to 12 thousand years ago.  The landscape that you now see is a result of this most recent ice age.

Glacier Park has some of the best preserved Proterozoic sedimentary rocks in the world, where remains of the earliest identified animal on earth exists, being over 1 billion years old.  The oldest rocks in Glacier Park, which are 1.6 billion years old, show no evidence of life, whether it be plant or animal, which indicates these rocks were deposited before life existed on this earth.

Triple Divide Peak: The Apex of North America
Glacier National Park is found in an extremely unique geological location.  Not only does the Continental Divide run north and south through the middle of the park where water runs westward to the Pacific Ocean and eastward to the Atlantic Ocean via the Gulf of Mexico, but there is a second continental divide where water runs into the Arctic Ocean via the Hudson Bay.  At the apex of these great divides sits Triple Divide Peak.  Even though this peak is only 8,020 feet in elevation, it is essentially the apex of North America, where if you poured a bucket of water on its summit, a third of the water would end up in the Pacific Ocean, a third of the water would end up in the Atlantic Ocean, and a third of it will end up in the Arctic Ocean. 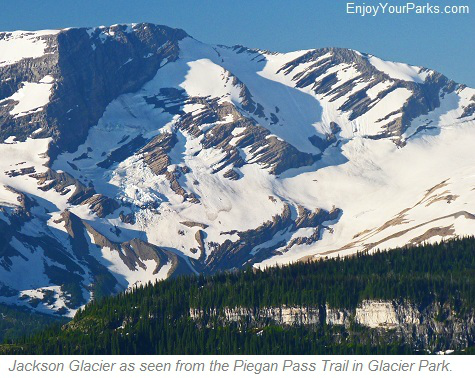 Glacier Park gets its name from the incredible glaciation that occurred during the last ice age 10 to 12 thousand years ago.

This ice was calculated to be over 6,000 feet thick, and as it carved the rock like a butter knife on butter, some of the tallest walls in North America were created, such as the North Face of Mount Cleveland, the East Face of Mount Gould, and the great North Face of Mount Siyeh, which is nearly 4,200 vertical feet high. 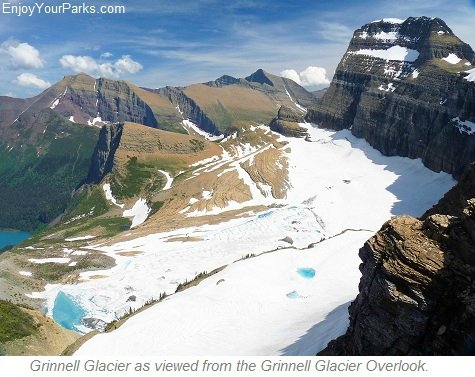 After this great ice age that occurred 10-12 thousand years ago, and after the gigantic valley glaciers melted away, then a smaller cousin of the valley glaciers began to form on the shadowy north faces and northeast faces of Glacier Park's mountains. These smaller cousins are known as alpine glaciers, and through the course of approximately 7,000 years, they continued to flourish.  Even though these smaller alpine glaciers changed the landscape, their over-all effect on the landscape of Glacier Park is minuscule compared to the great valley glaciers of the last ice age.

These small alpine glaciers found on the north and northeast faces of the Glacier Park mountains at about the 8,000 foot in elevation, made a final push during the Little Ice Age that occurred from 1550 to 1850. 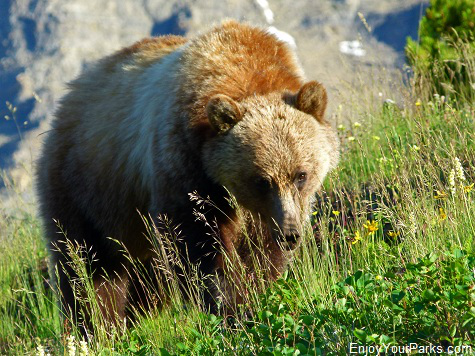 Because Glacier Park is home to the true apex of North America, which is located at the summit of Triple Divide Peak where two continental divides literally collide, this unique situation creates a wide variety of species and ecology.

On the western side of Glacier National Park, you will find what is known as the "Maritime Species", which are plant and animal species commonly found in the Pacific Northwest.

Most notable are the large cedars and hemlocks found near the Lake McDonald Area.

ALL ABOUT GLACIER NATIONAL PARK

For all the details on what to do, where to go, and where to see animals in Glacier National Park, please visit our page entitled "All About Glacier Park". 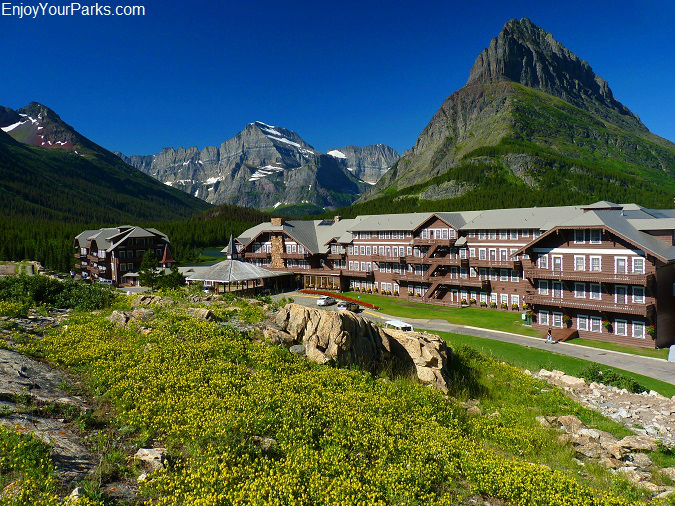