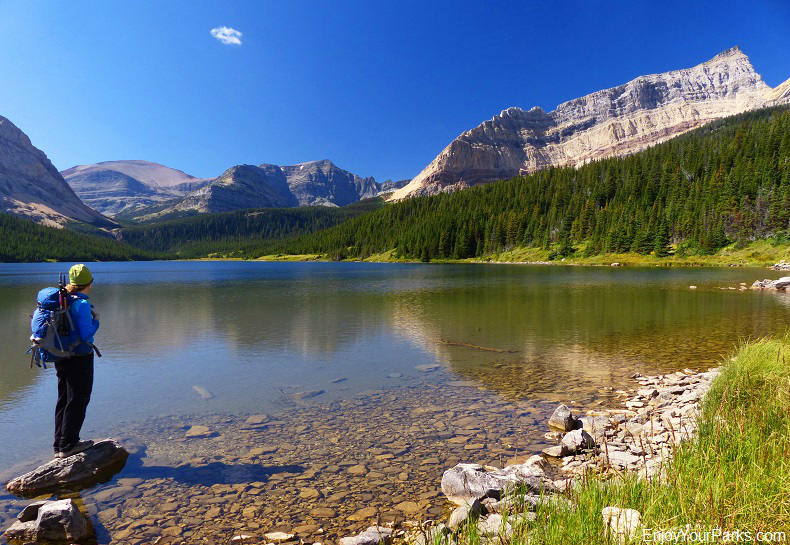 The hike to Slide Lake in Glacier National Park is one of those Glacier Park hikes that take you into a nearly forgotten area of Glacier National Park.  We really like this Glacier Park hike because the trail to Slide Lake takes you through miles and miles of amazing groves of aspens and rolling foothills, and it provides you with seldom seen views of Chief Mountain.

Interesting History of Slide Lake
Slide Lake was created during a massive rock slide in 1914, where thousands of tons of rock slid down the north flank of Yellow Mountain. This rock slide created natural dams on Otatso Creek, and the result was Slide Lake and another unnamed lake just down stream of Slide Lake, which we call Lower Slide Lake. These newly formed lakes then became incredible fisheries for the native Bull Trout, but now that the Bull Trout population is threatened, fishing is no longer permitted on or around these lakes. 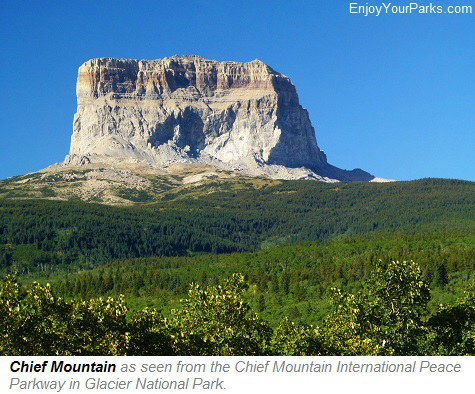 This gate is the trailhead to Slide Lake. You will also see a blue-colored sign beyond the gate that says, "No Non-Tribal Member Camping". The best place to park your vehicle is on the OTHER side of the highway, and make sure you vehicle is a safe distance off the shoulder of the highway. 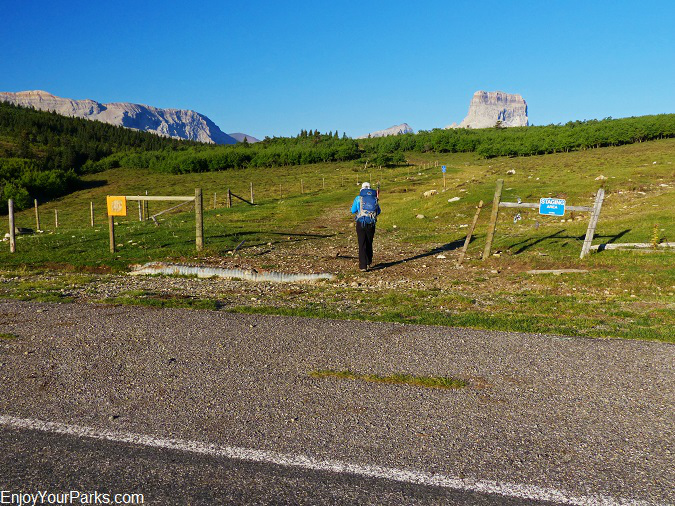 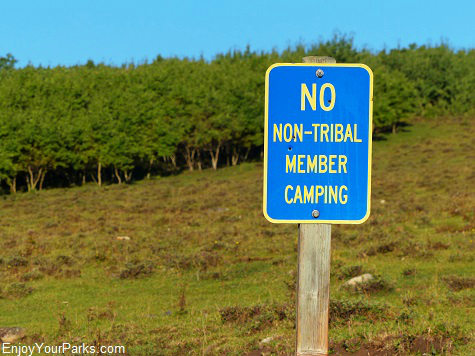 At the barbed wire gate, open it and once everyone is through it, make sure you close the take behind you....That is, if the gate was already closed.  If the gate was open, then that means the rancher wants the gate to remain open. There are range cattle in these area, and it is important to pay attention to the gate situation.

Once you're past the gate, you will immediately see a blue-colored sign that says, "No Non-Tribal Member Camping". This means what it says... you cannot camp overnight anywhere along this trail while it's passing through the Blackfeet Indian Reservation. Of course once you reach the boundary of Glacier National Park, then all rules and regulations for Glacier National Park apply. 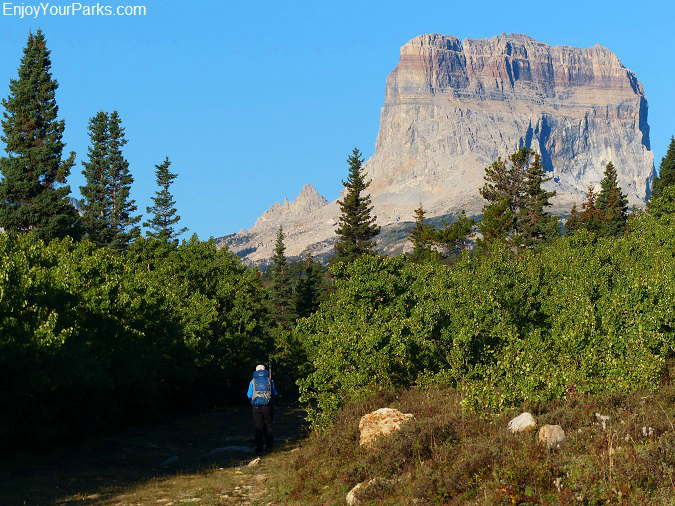 Shannon hiking along the trail to Slide Lake in Glacier Park, with Chief Mountain looming to the northwest.

Otatso Creek Road
The initial section of the trail is actually an unimproved jeep trail known as the Otatso Creek Road.  The jeep trail works its way west along the what is known as Sandy Ridge.  The view of Chief Mountain gets better and better as you head further west, and you will enjoy the miles and miles of open fields intermixed with aspen groves throughout this enjoyable section of the hike to Slide Lake.

Domestic Cattle
Oh, and one more thing... you will more than likely encounter domestic cattle along the way.  They aren't anything to worry about, but they might give you a heart attack if they suddenly appear out of the brush because initially you'll think its a big grizzly bear coming towards you! 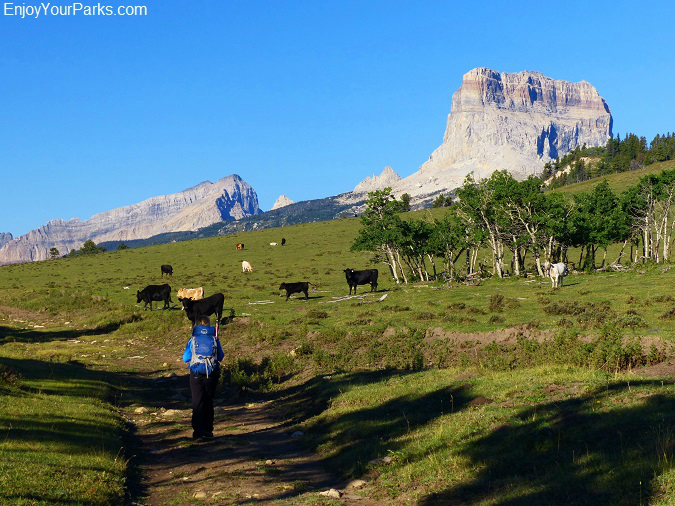 You will probably see domestic cattle along the stretch of trail that runs through the Blackfeet Indian Reservation.  Don't worry, they're harmless. 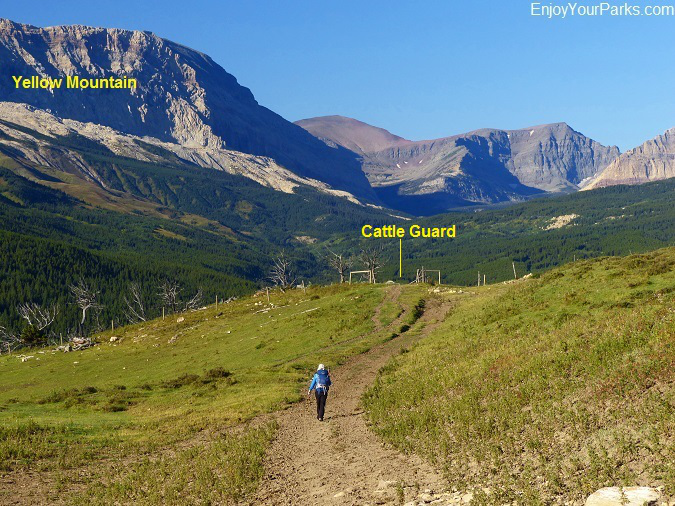 Shannon approaching the cattle guard and fence line at mile 2.0 along the Slide Lake Trail in Glacier Park.

As you hike through beautiful aspen groves and open green pastures on your way to Slide Lake in Glacier National Park, you will encounter a metal cattle guard and barbed wire fence at mile 2.0.  Once you pass through this fence, you will be awe-struck by the gorgeous view of the Otatso Creek Valley to the west and Chief Mountain looming above it.  You'll see an ocean of aspen trees that during the fall of the year, all turn a bright yellow, but even during the summer months these bright green leaves and green grass really make for an incredible sight (see below).... 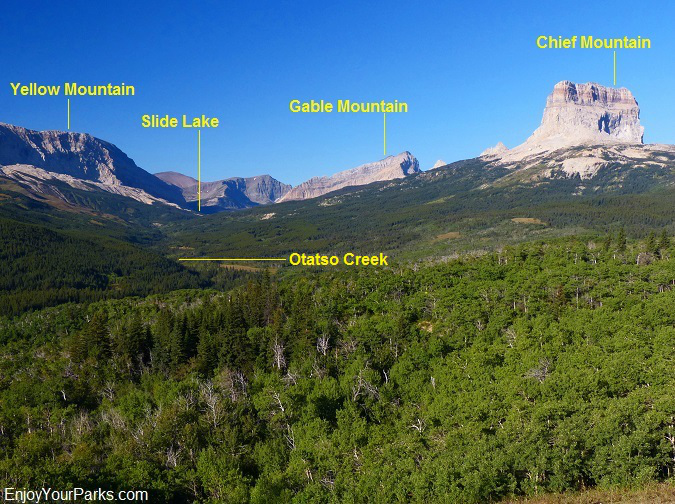 This is the view to the west from the cattle guard and fence at mile 2.0.  This impressive view shows you where you will be hiking to, as well as the surrounding mountains.  Notice the ocean of aspens!

By the way, as if the jeep trail wasn't in rough enough shape, beyond this cattle guard the Otatso Creek Road sustained substantial damage during a flood in the mid 90's, and anyone who made it this far in their off road vehicle will probably call it quits beyond this point.  But as far as foot travel, the jeep trail is just fine. 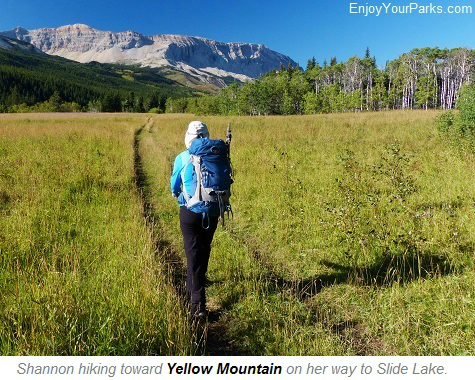 From this point just beyond the cattle guard, the trail will gradually drop down into the Otatso Creek Valley, and there it will then continue to work its way westward along the valley's northern slope above Otatso Creek.  You will encounter some smaller creeks that cross the trail along the way during this section of the hike to Slide Lake in Glacier National Park, but you can't count on them for a water supply, especially late in the summer.  However, one of these creeks appears to be a spring, because even late in the fall we've seen it with plenty of water still flowing. 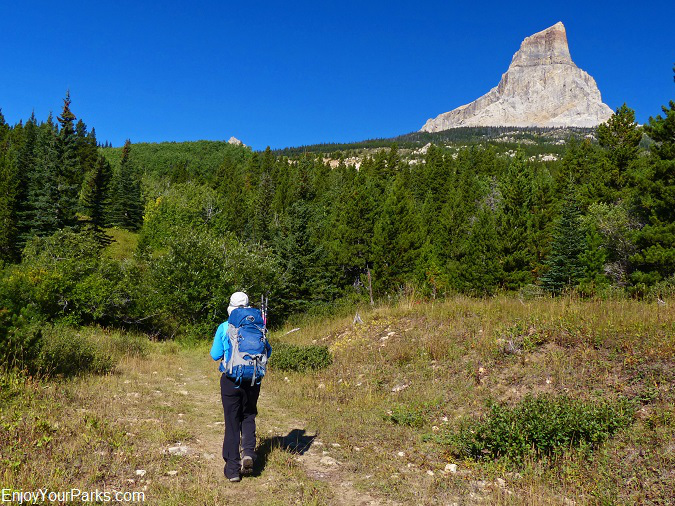 As the trail continues to work its way from east to west, the shape of Chief Mountain in Glacier National Park continues to change before your very eyes! 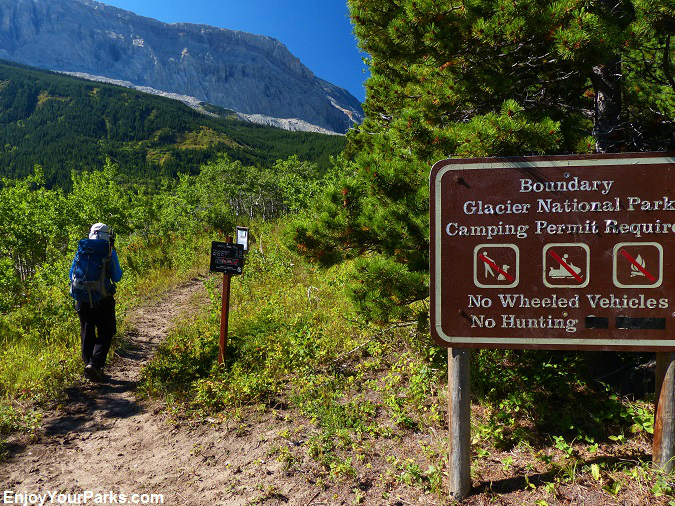 Shannon at the Glacier National Park Boundary along the trail to Slide Lake. 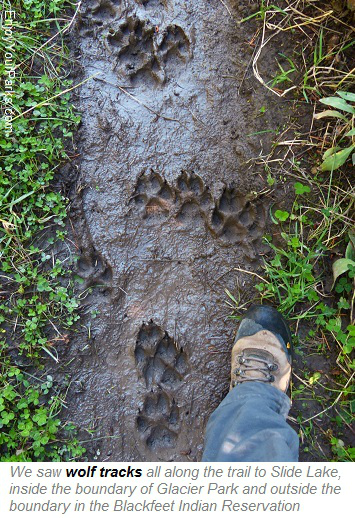 At this boundary, there is a wooden fence, as well as a large sign saying you're now in Glacier National Park.  The trail continues to follow Otatso Creek up the Otatso Creek Valley, and the views of Yellow Mountain are quite nice.  You will also notice that there are more and more evergreen trees along the trail as you gain in elevation.

By the way, we saw a lot of fresh wolf tracks along the trail to Slide Lake the last time we were on it... both inside the Glacier Park boundary and outside the boundary in the Blackfeet Indian Reservation.  Some sets of tracks were only minutes old, where they were walking on the trail coming toward us, but saw us first and abruptly left the trail before we passed by.  So we just missed seeing them. 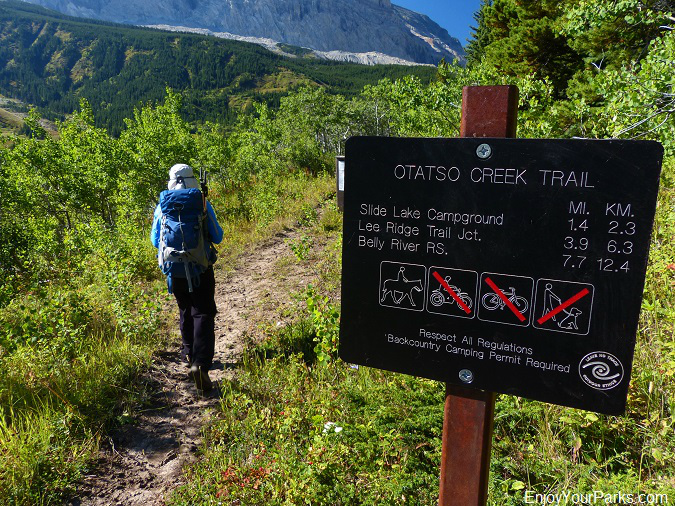 At the Glacier Park boundary, the trail to Slide Lake is now named the Otatso Creek Trail.

These historic patrol cabins are still in use, being used by the Glacier Park trail crew for maintaining the trail to Slide Lake and Gable Pass, as well as the Slide Lake Campground.  So as you pass by these cabins, keep in mind that members of the trail crew are actually living in them for a good portion of the summer season.... 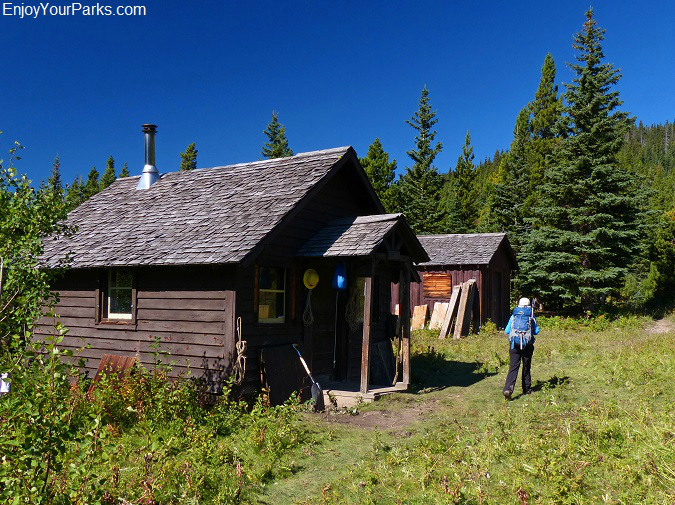 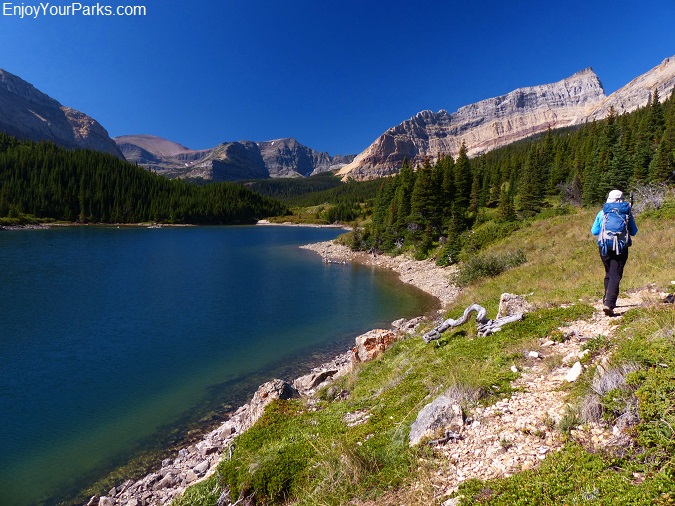 This is the unnamed lower lake (which we call Lower Slide Lake).  This lake was also the result of the massive rock slide in 1914.  Slide Lake is only 0.3 miles further up the valley.

When Yellow Mountain's north flank had its massive rock slide in 1914, this slide created natural dams along Otatso Creek.  There were two natural dams created, therefore creating two separate lakes.  The first lake, which is unnamed (we call it Lower Slide Lake), is much smaller than Slide Lake, but is still quite scenic (see photo above).  You can still easily see where this devastating rock slide dammed Otatso Creek at the foot of this lower lake (see photo below).  These lakes developed into an incredible fishery for the native Bull Trout, but these amazing trout are now endangered, so please note the NO FISHING signs, as the endangered Bull Trout needs all the help they can get.

This photo shows one of the natural dams created by the tremendous Yellow Mountain rock slide in 1914. 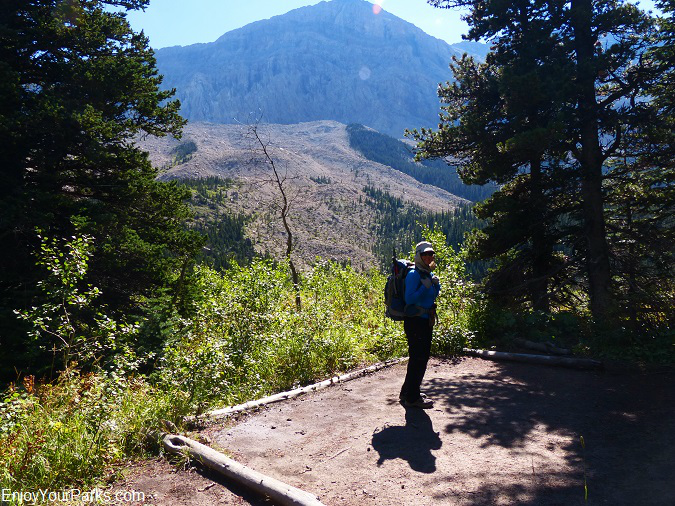 Shannon standing on one of the Slide Lake Campground tent sites in Glacier National Park.  Note the massive Yellow Mountain rock slide of 1914 in the background. 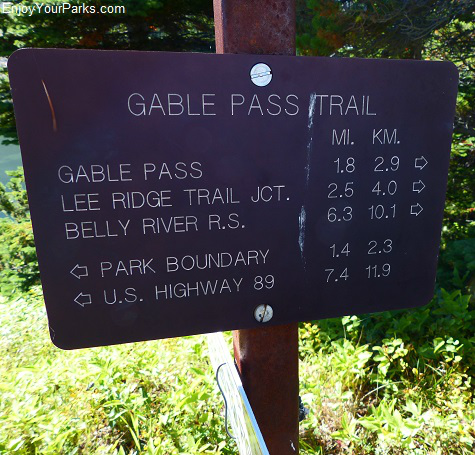 Right next to the Slide Lake Campground junction, you will also encounter the Gable Pass Trail Junction. The Gable Pass Trail continues on to Slide Lake, and then abruptly climbs 1,500 vertical feet in about 1.7 miles to Gable Pass. Needless to say, this trail is not very enjoyable for hikers with heavy overnight packs on their back!

Gable Pass is directly above Slide Lake to the north, just below the fabled Gable Mountain.  From Gable Pass, the trail connects with the Lee Ridge Trail at the top of the south end of Lee Ridge.

The Gable Pass Trail then takes you down the other side of Lee Ridge into the Belly River Area of Glacier National Park, where hikers on a multi-day hiking adventure can either head up the Belly River Valley towards Elizabeth Lake and Helen Lake, or they can head into the Mokowanis River Valley, which includes Cosley Lake, Glenns Lake, Mokowanis Lake and Stoney Indian Pass. 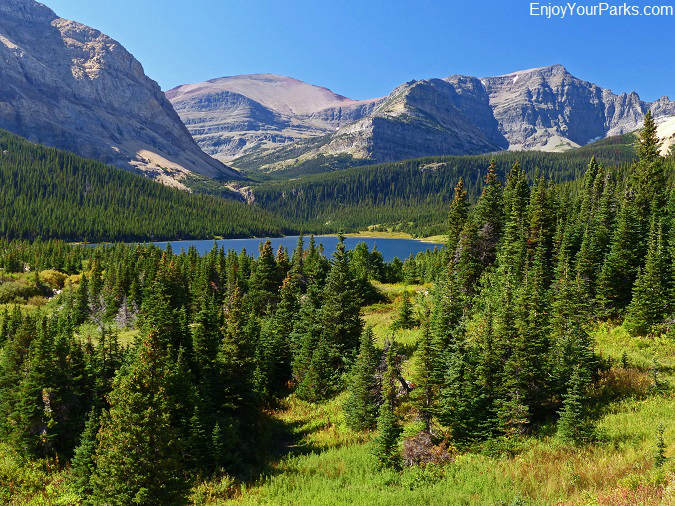 This is a view of Slide Lake from just beyond the head of Lower Slide Lake in Glacier National Park. 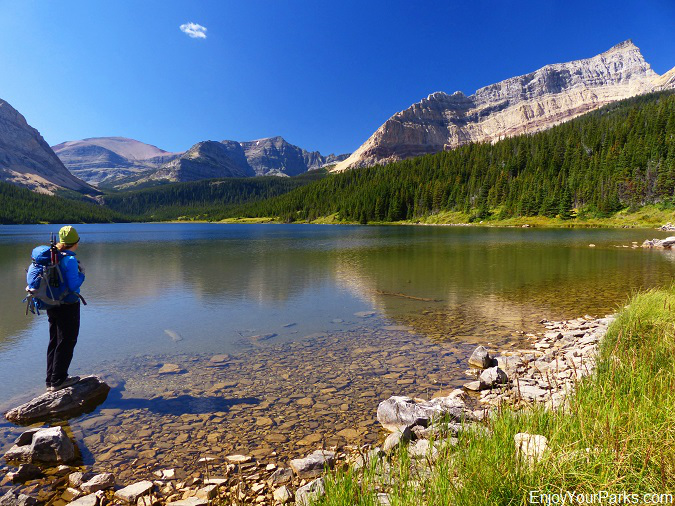 The trail used to continue on along the north shore of the lake until it finally faded out near the head of Slide Lake to the west.  This trail has all but disappeared now.  However, you can still bushwack up to the head of Slide Lake, and go further up the drainage if you'd like (that is, if you like bushwacking).  At the head of Otatso Creek, which is quite a bit further west of Slide Lake (and higher), lies Otatso Lake.  This is very remote country and few people ever have ventured there.

For those of you who simply want to take an enjoyable day hike to Slide Lake, once you've taken in the beauty of this unique place and had a nice lunch, then you will once again behold the incredible landscape on your way back to the Chief Mountain International Peace Parkway, where your vehicle is parked and waiting for you.  The hike back is of course equally as scenic, with Chief Mountain watching you the entire way as the trail once again takes you through gorgeous open green meadows and beautiful groves of aspens. 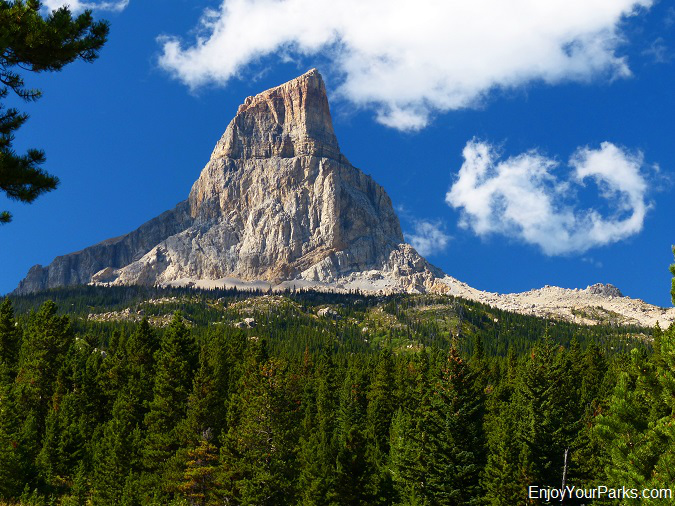 A view of Chief Mountain on the Slide Lake Trail on our return hike back to the trailhead.

If your ultimate goal is to get into the Belly River Valley (Elizabeth Lake, Helen Lake) or the Mokowanis River Valley (Cosley Lake, Glenns Lake, Stoney Indian Pass), then you might want to consider avoiding the 1,500 vertical feet gain in 1.7 miles from Slide Lake to Gable Pass by skipping Slide Lake all together.  Instead, we recommend that you simply hike the Lee Ridge Trail and drop down to the Gable Creek Campground, or take the Belly River Trail to Gable Creek Campground or beyond. This avoids a lot of unnecessary vertical elevation gain and loss. 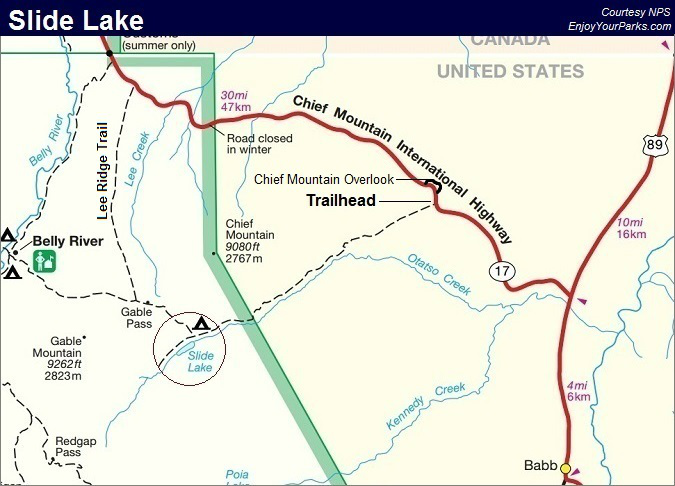