Views from the Summits:
Mount Henry 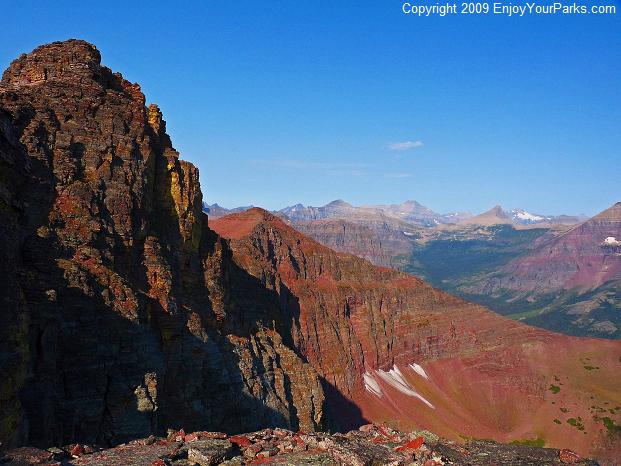 This is the final 500 feet of Mount Henry.  In the far distance you can see peaks such as Flinsch Peak, Mount Stimpson and Mount Phillips, just to name a few.

Mount Henry (8,847 feet) is located in the Two Medicine Area, and it offers stunning views of the many peaks that surround Two Medicine.  The first thing that you notice is the rocks are really, really, really red, and it makes for really colorful photos.  It almost looks fake it's so red! 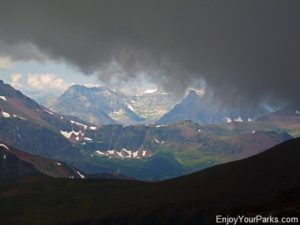 To get to Mount Henry, you take the Scenic Point Trail, and by the time you're on the summit, you're about 4,000 vertical feet higher than your vehicle.

The first time we climbed Mount Henry, we just made it to the summit when one of the worst summer storms we've ever encounted hit us like a bomb (see right photo).  Looking back on it all, we should have stopped climbing the moment we saw dark clouds, but they faked us out because they were hanging in the eastern sky, which normally means they're going to keep heading east.  Well, we were wrong.  Little did we know that a huge cloud bank was building up under the north face of Mount Henry while we were navigating the south face.  When we reached the summit, we only had time for two photos (see below), and then the "storm from hell" spilled over the top of Mount Henry and we literally could not see our hands in front of our face.  And to make matters worse, the rain was pouring horizontal buckets of water on us like a fire hose.  And did we mention the temperature dropped about 30 degrees in 20 minutes?

We won't go into details here, but let's just say it was an interesting exercise climbing off the summit cliffs literally by brail. We eventually made it down safe and sound, but we had no visibility for 4 solid hours!!!

Normally we are overly paranoid about weather, and have ALWAYS stopped climbing the instant the weather begins to change.  We were nothing but STUPID on that day on Mount Henry, and it reminded us why we are so paranoid about weather.  99% of all accidents and problems in the mountains are due to the climber's stupidity, and nothing else.

A few days later we climbed Henry again.  This time, the weather was perfect! 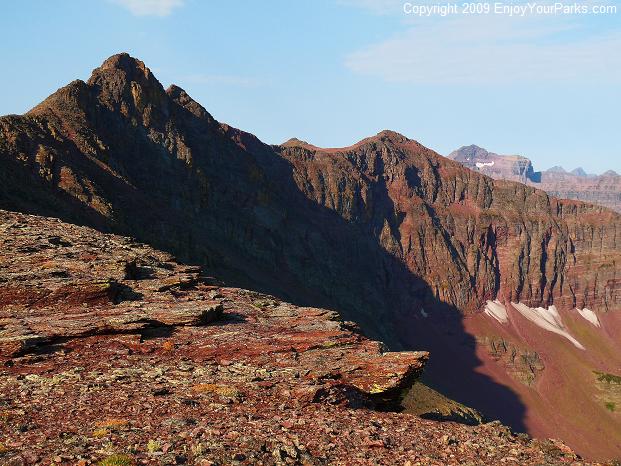 The rock color around the Mount Henry area are a vivid red. 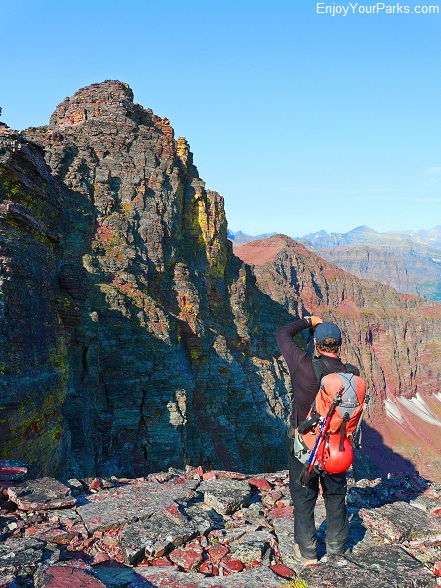 David taking one last photo before we started our final push to the summit of Mount Henry.

Views from the Summit 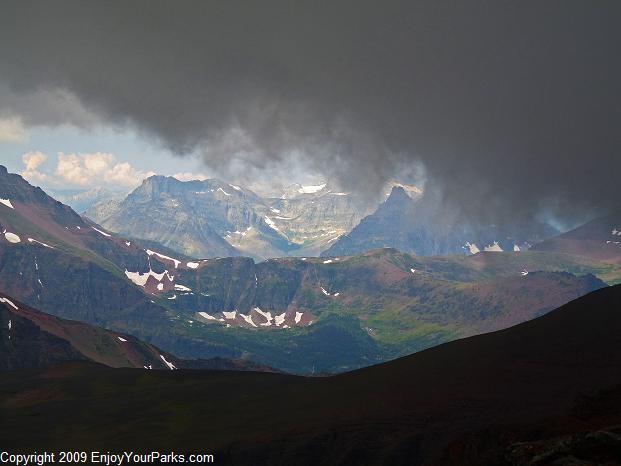 This is what greeted us on the summit on the morning of the storm.  This cloud came up over the north face of Mount Henry, and within 10 seconds of summitting the peak, we couldn't see our hands in front of our face, and that lasted for over 4 hours!  There was also heavy horizontal rain and plummeting temperatures!  This was one of two photos that we took before the storm hit and the "fun" began. 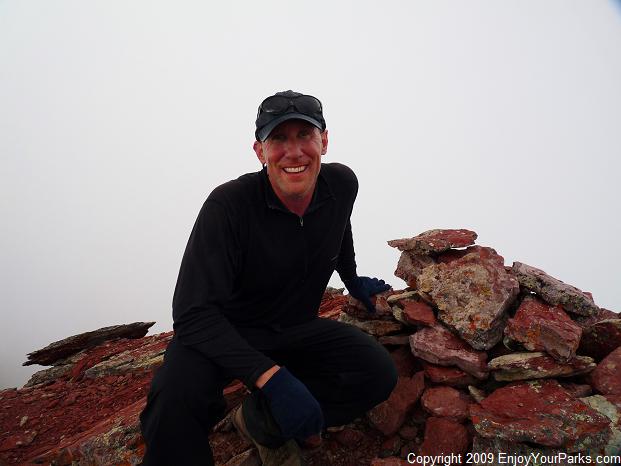 This was the other photo we took just before the storm hit on Mount Henry.  Seconds after this photo was snapped, everything turned white and wet for 4 solid hours.  You could barely see your hand in front of your face.

The second time we climbed Mount Henry, the weather was perfect (thank goodness!) 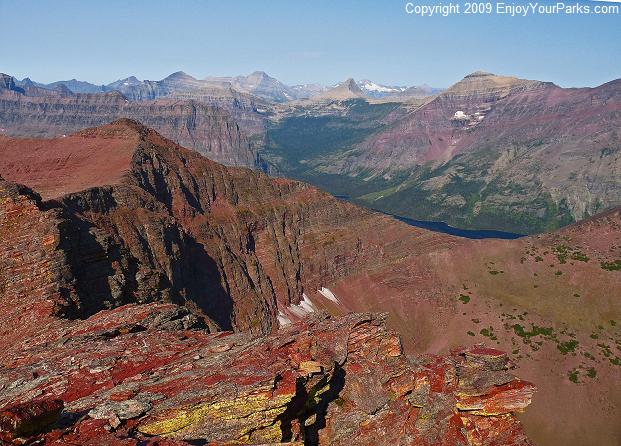 This is a view to the west from the summit of Mount Henry.  You can see Two Medicin Lake peeking at us far below in the Two Medicine Valley.  Rising Wolf Mountain looms above the lake to the north. 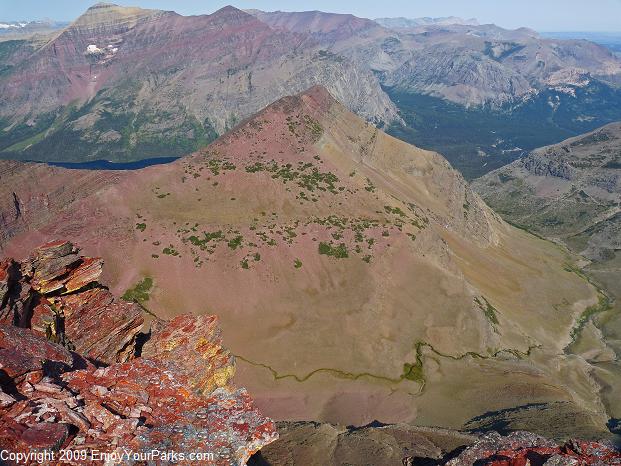 The peak directly below us is Appistoki Mountain.  Rising Wolf Mountain is to the upper left.  (We are facing north in this photo)  Appistoki Creek is thousands of feet below us, under the north face of Mount Henry. 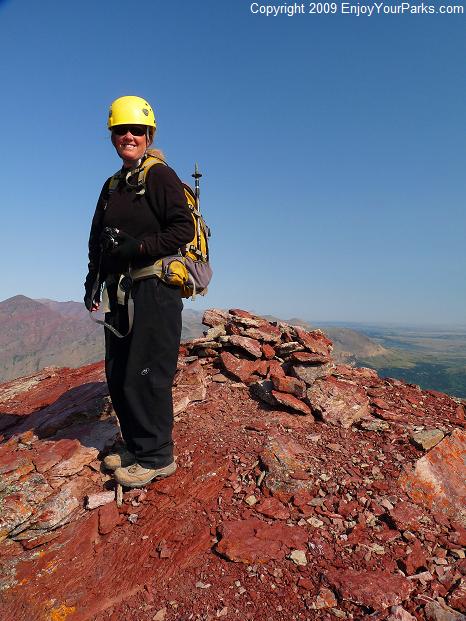 Here's a view to the northeast.  The prairie sprawls eastward seemingly forever. 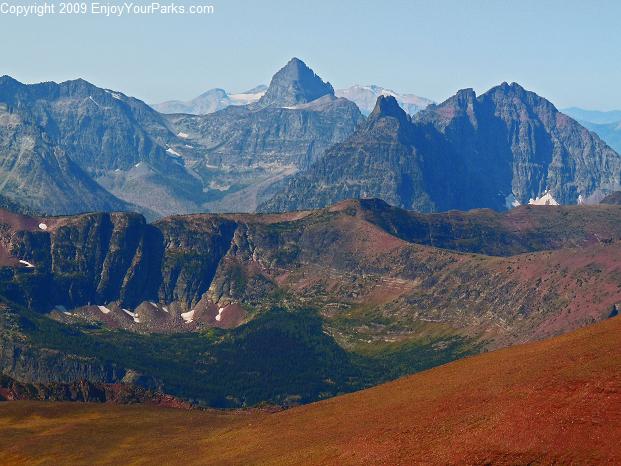 This is a view of the famous Mount Saint Nicholas, the sharp peak in the center of the photo.  This is the most technically challenging peak in the park.  We are facing southwest. 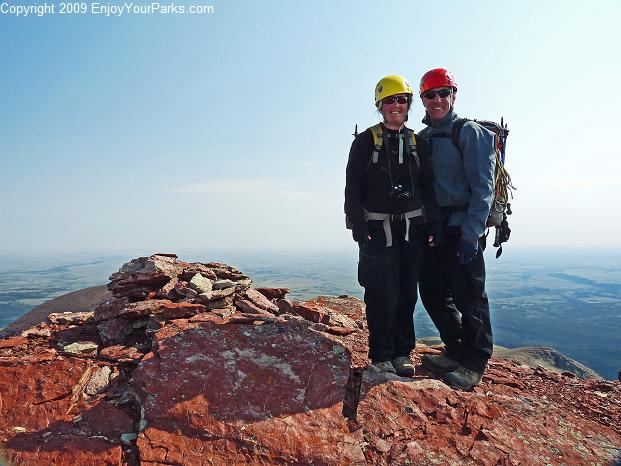 The eastern prairie goes forever!  If you look hard, you can see Minneapolis (just kidding). 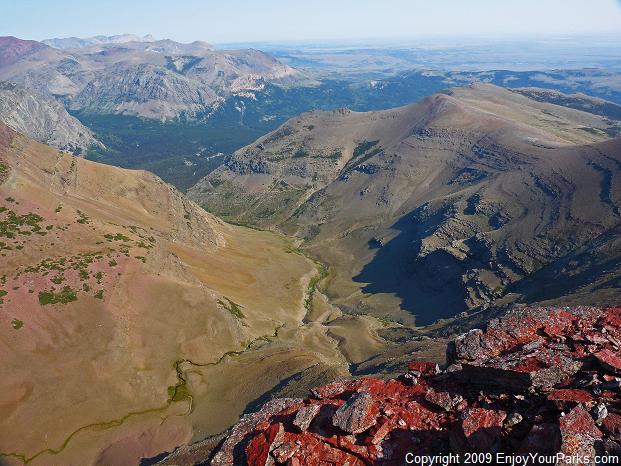 The ridge to the right is where Scenic Point is located. 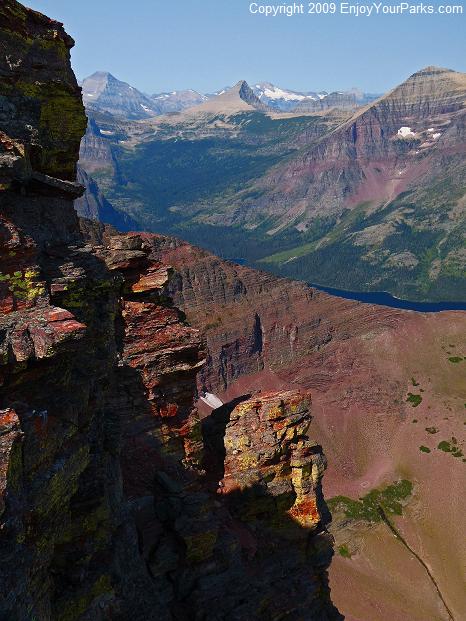 Another gorgeous view from Mount Henry.  Flinsch Peak, the sharp matterhorn, is in the distant center of the photo. 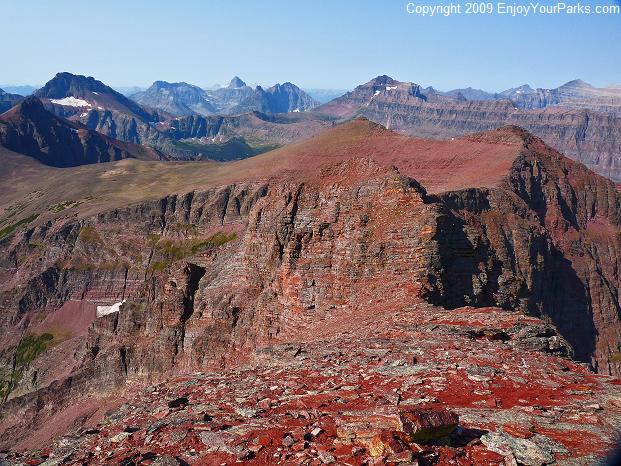 The peak to the far left is Grizzly Mountain, another famous mountain in the Two Medicine Area. 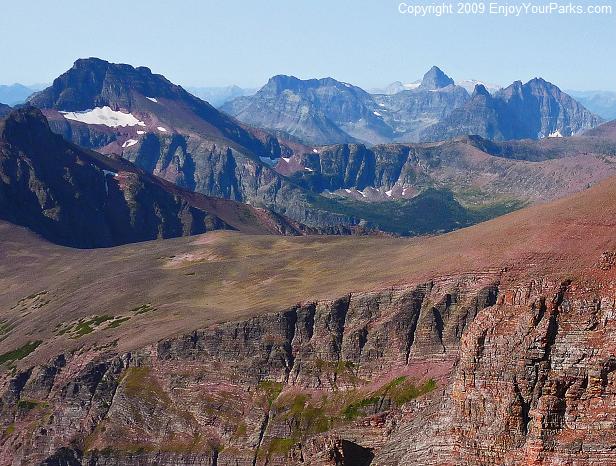 Here's a closer look at Grizzly Mountain (left) and the sharp spire of Mount Saint Nicholas to the center-right. 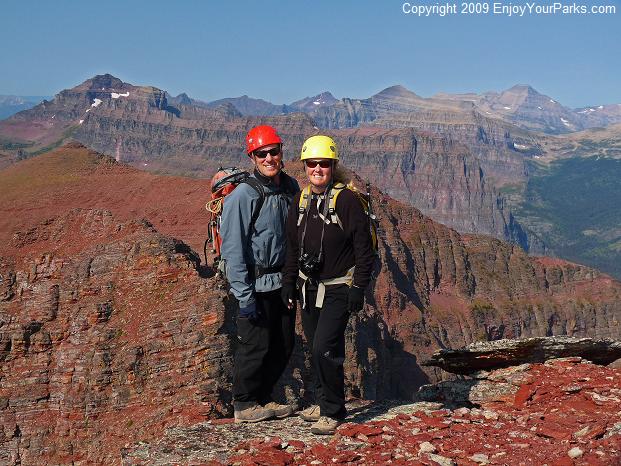 You can see forever on top of Mount Henry. Did we mention the rocks are red? 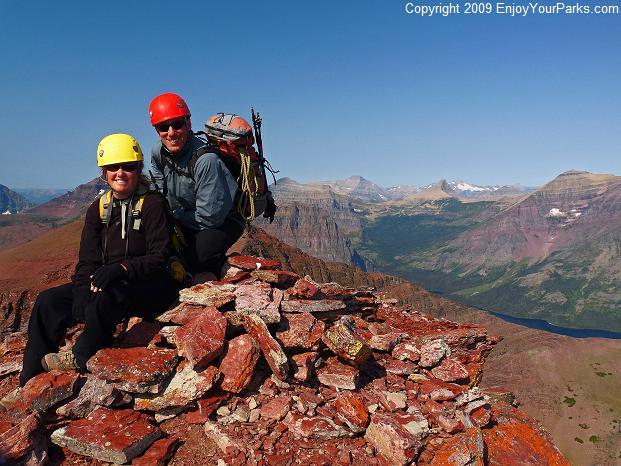 As you've probably noticed by now, Mount Henry is RED! 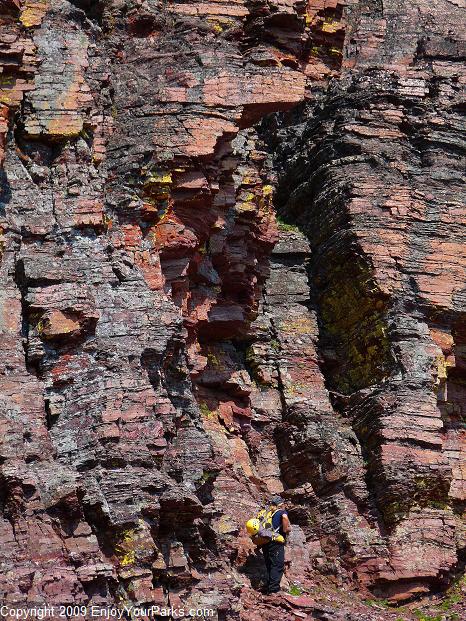 This is what greeted us during the final 200 feet of the climb. 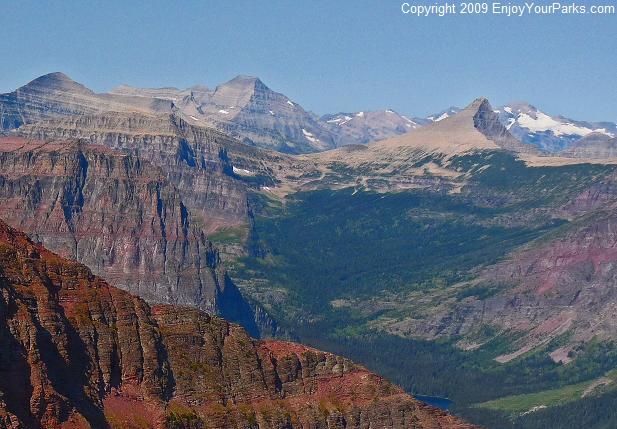 Can you name these peaks? 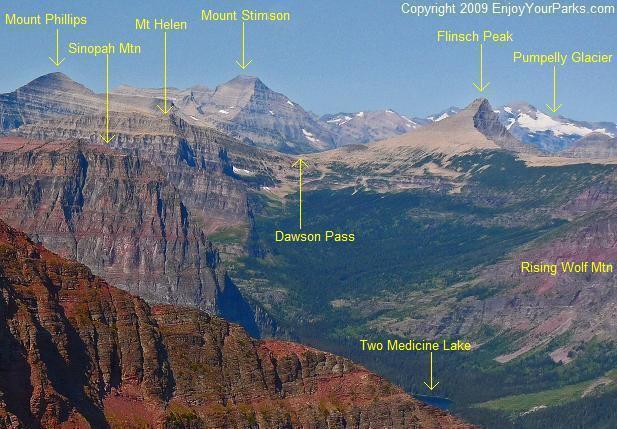 Here are the answers. 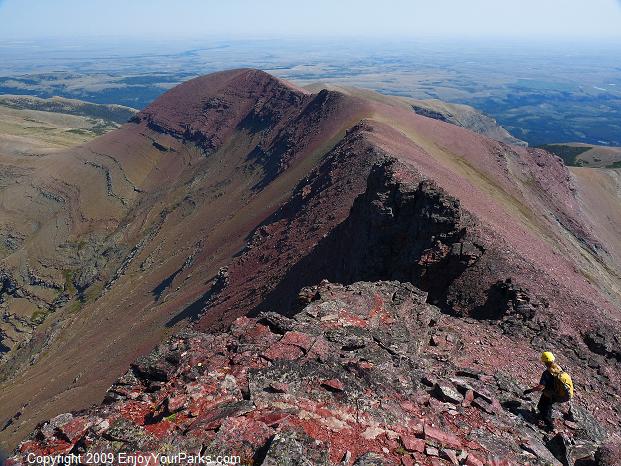 The rounded hill at the end of this ridge is Two Medicine Peak.  We are facing east.  Mount Henry is behind us to the west about 400 yards.  We are heading back down to our truck that's parked at the Scenic Point Parking Lot.

Mount Henry is a beautiful, vivid red peak that offers tremendous views of the Two Medicine Area and beyond.