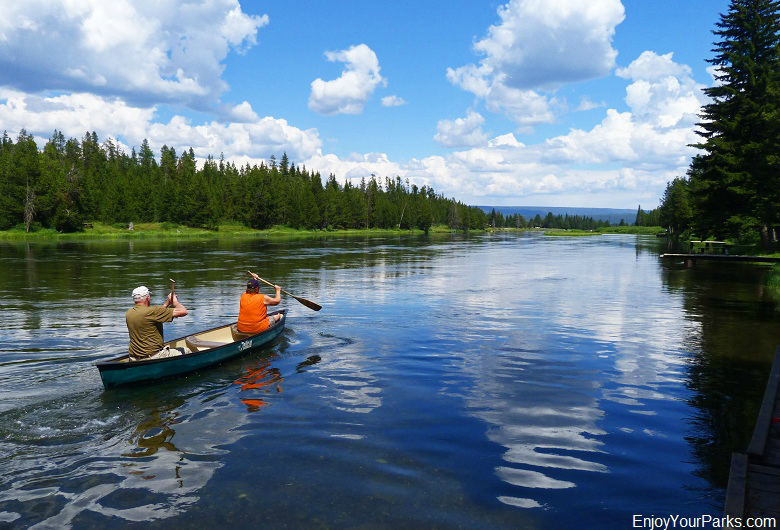 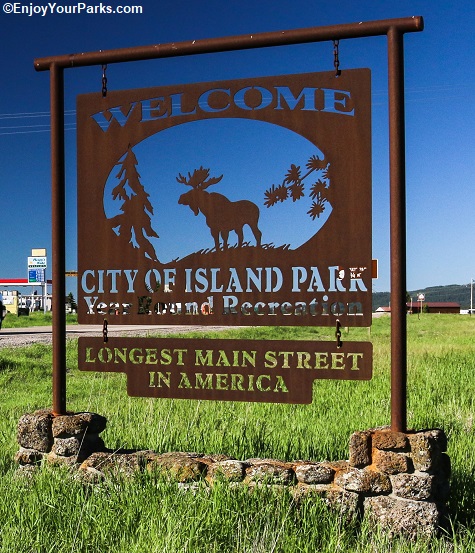 Island Park Idaho is only 15 miles from the west entrance of Yellowstone National Park, and is a very popular place for visitors to enjoy the great outdoors in and around the Yellowstone Park area.

The town of Island Park is only about 500 feet wide but is 33 miles long!  Their claim to fame is that they have the "Longest Main Street in America!", as well as some of the best outdoor recreation in the country.

There are a good number of motels, lodges, campgrounds and vacation rentals throughout the Island Park Area to accommodate all the visitors who come to enjoy the area during their vacation to Yellowstone National Park. 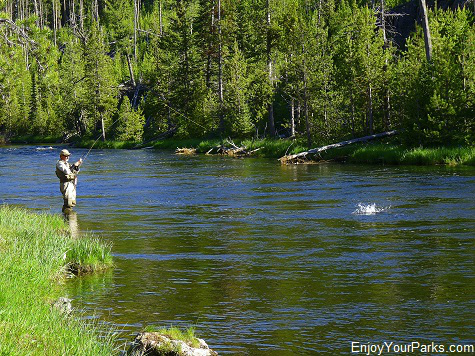 One of the most popular activities in and around Island Park Idaho is trout fishing.

Henry's Fork of the Snake River runs right through the town, and is a world famous blue ribbon trout stream.

And just northwest of Island Park is Henry's Lake, which is teeming with trout.  To help you learn how to fish these amazing waters, there are several fishing guides and lodges in the Island Park area.

We've done a lot of fishing here and have enjoyed it tremendously.  Henry's Lake has a variety of trout, including cutthroat trout and rainbow trout.  And there is also a hybrid trout that is a cross between a cutthroat and a rainbow that are a blast to catch!  Henry's Lake is a wonderful lake that is really fun to fish on. 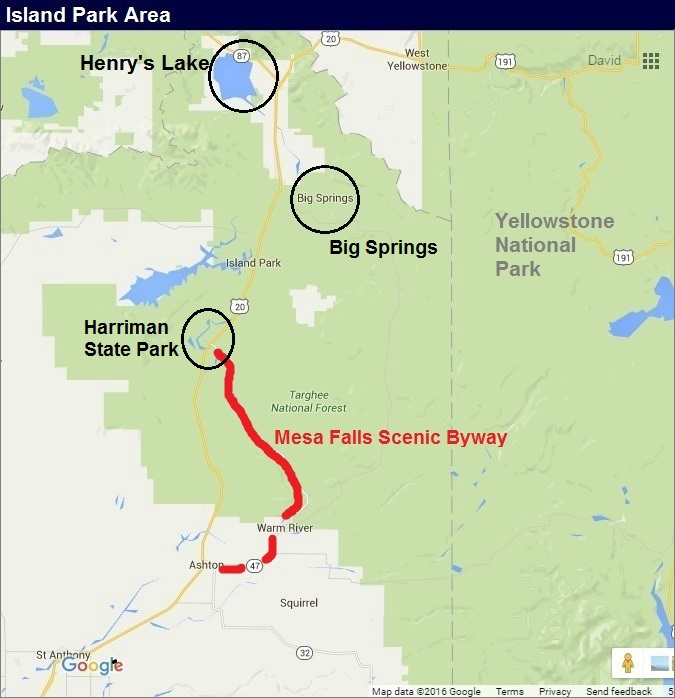 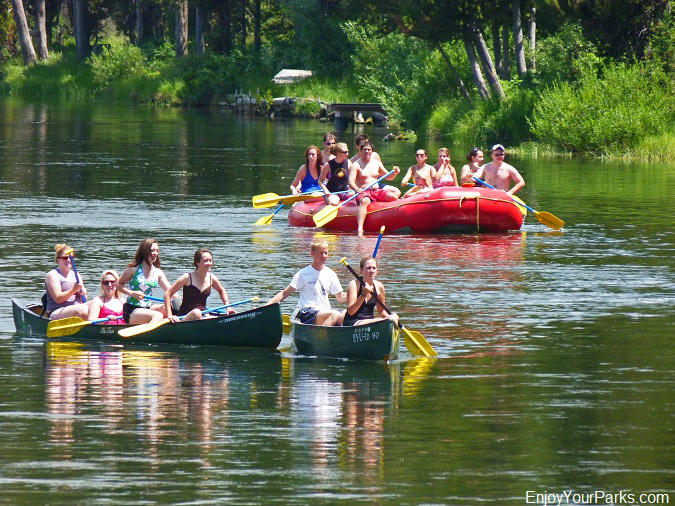 Floating the Henry's Fork of the Snake River at Island Park Idaho is an extremely popular activity during the summer months for Yellowstone National Park vacationers. 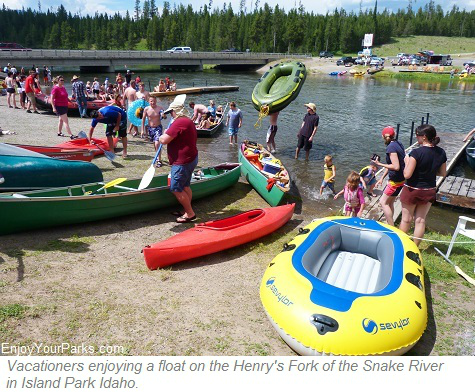 Henry's Fork of the Snake River, which runs directly through Island Park Idaho, is one of the best and relaxing river floats we've ever been on.

You can rent rafts and canoes from various businesses throughout Island Park Idaho, and float one of the prettiest rivers in the west!

The most popular float begins near Big Springs, and ends up at the big bridge along the main highway.

Henry's Lake, which is located just a few miles northwest of Island Park Idaho is a great place to go boating, wave running, and all the other fun things you can do on a beautiful mountain lake.... 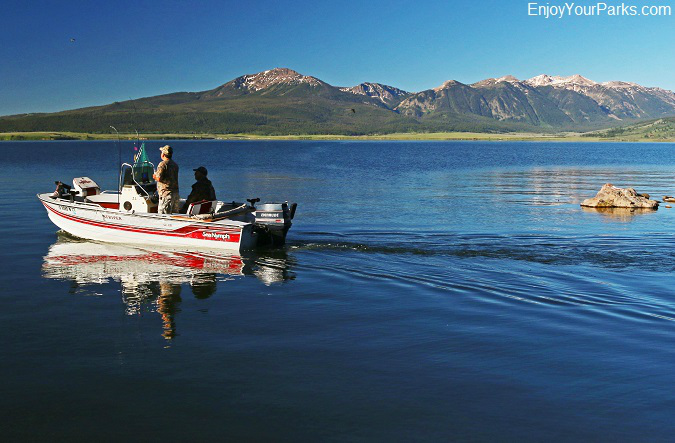 Henry's Lake is located just northwest of Island Park Idaho, and is known for its fantastic fishing opportunities.  At eight square miles in total area, and only four miles long and two miles wide, Henry's Lake is is home to various trout species, including a cutthroat-rainbow hybrid (known as a "cut-bow" that is extremely popular with the Henry' Lake fishing enthusiasts.  There are several resorts, marinas and campgrounds located around the lake, including Henry's Lake State Park which is found on the south end
of the lake. 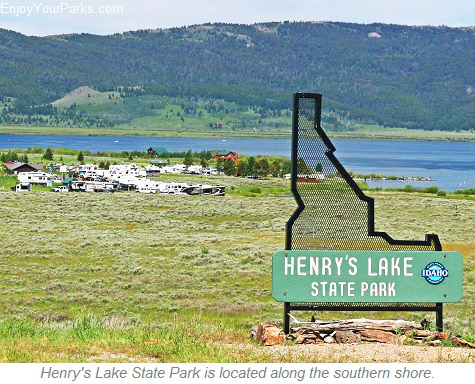 And not only is Henry's Lake a popular place for fishing, but it also the headwaters of the fable Henry's Fork of the Snake River, which is one of the top blue ribbon trout streams in America.

Interesting to note is that Henry's Lake rests less than 10 miles from the headwaters of the Missouri River, which is located over the Continental Divide in Southwestern Montana.

Located along the south shore of Henry's Lake is Henry's Lake State Park.  This 585 acre Idaho State Park is open the Thursday before Memorial Day through the second Saturday in October.  There are 83 campsites that are serviced, as well as 3 cabins and 3 designated ADA campsites.  The campground provides showers, flush toilets, a fish cleaning station and a dump station.   There is a very nice boat ramp and boat dock located at the Henry's Lake State Park campground that is well suited for Henry's Lake boating enthusiasts. 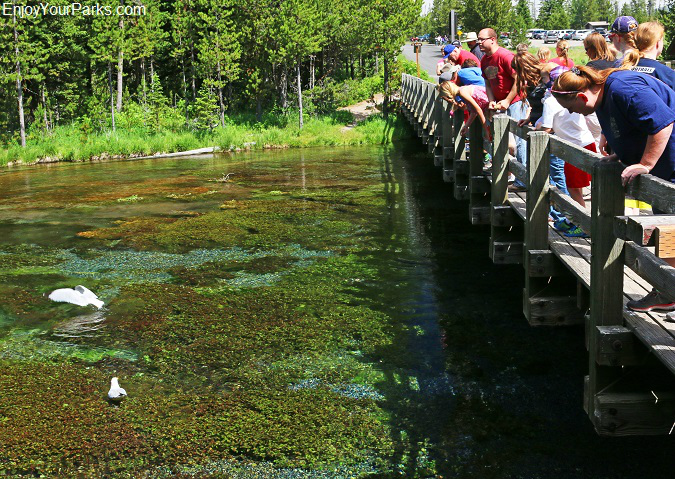 Visitors looking at large rainbow trout below the bridge at Big Springs.

A popular attraction in the Island Park Area is Big Springs, which is a large spring that produces over 120 million gallons of water each and every day. 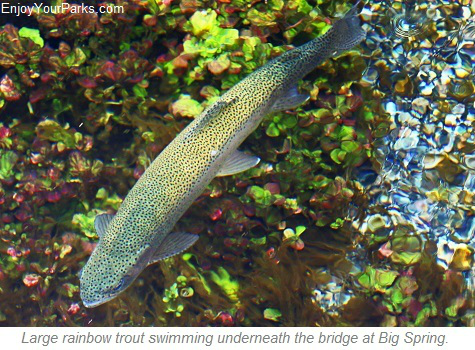 Due to this incredible volume of water, Big Springs in Idaho is regarded as a "first magnitude" spring.  The Big Springs Area is a "National Natural Landmark, and is the primary source of water for the Henry's Fork of the Snake River.

In a very short distance, the Big Springs creates a river that is 150 feet wide!  At a constant 52 degrees (f), Big Springs is among the top 40 springs by volume in the world.

And one of the hottest attractions at Big Springs is the large rainbow trout that hang out below the bridge. These trout are safe from fishermen for 5 miles downstream, starting at the springs. 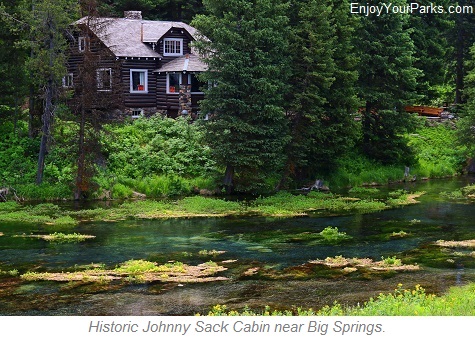 Johnny took tremendous pride in his work, and much of the original furniture within the cabin is still there...including a double bed that was made of 96 wood pieces that were nailed and glued together, and a ceiling lamp that contains 72 individual handcrafted pieces of wood.

The cabin took about three years to build, and much of it was built with hand tools such as saws, scrapers, draw knives and planers.  Johnny used a nearby water wheel that he built to create electricity. The Johnny Sack Cabin is part of the National Register of Historic Places, and is really a fascinating cabin to visit during your time in the Island Park Area. 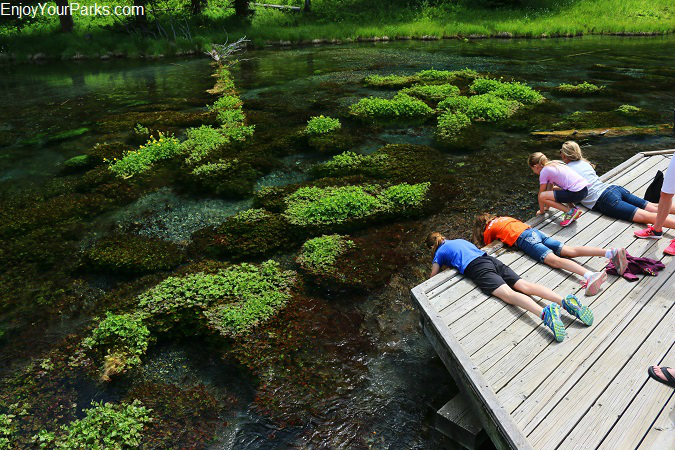 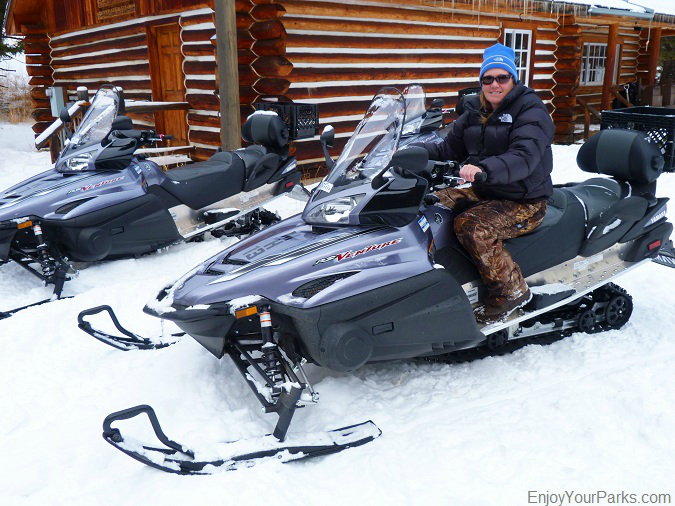 Island Park Idaho near Yellowstone National Park gets about 9 feet of snow each winter, which makes this area one of the leading snowmobile destinations in the country.