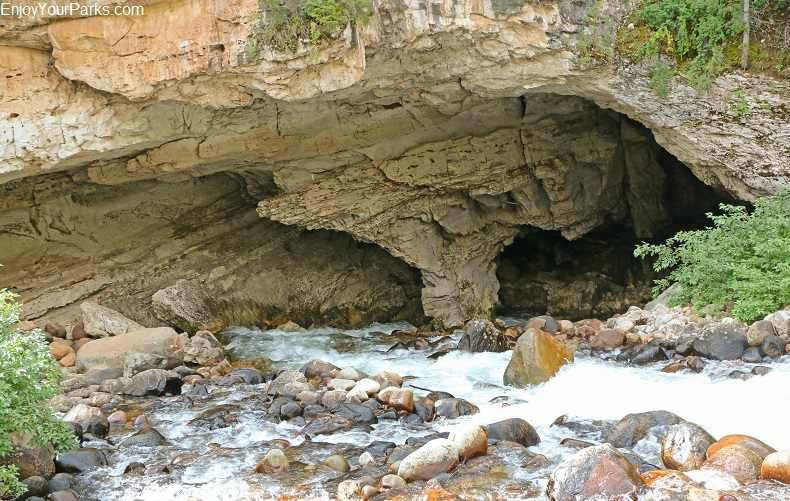 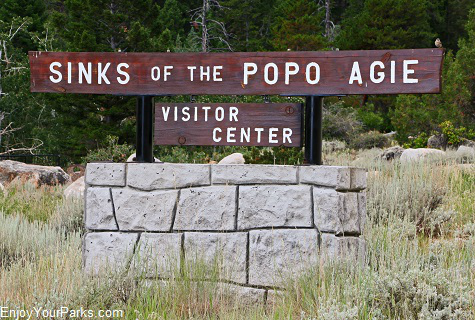 Sinks Canyon State Park in Wyoming lies in the Wind River Mountains at their southern-most base, and is an amazing geographical area that is fascinating to see and explore.  Located 6 miles southwest of Lander Wyoming on Highway 131, Sinks Canyon State Park is where the Popo Agie River literally vanishes into a huge, underground cavern known as "The Sinks".

The Popo Agier River then reappears a quarter of a mile downstream in a beautiful pool known as "The Rise" that is usually full of trout.

The Sinks Canyon State Park is also home to a very nice visitor center, as well as hiking trails, a campground and a picnic area.

In addition to exploring the fascinating geological feature called "The Sinks", SInks Canyon State Park is a popular place for visitors to hike, rock climb and fish. 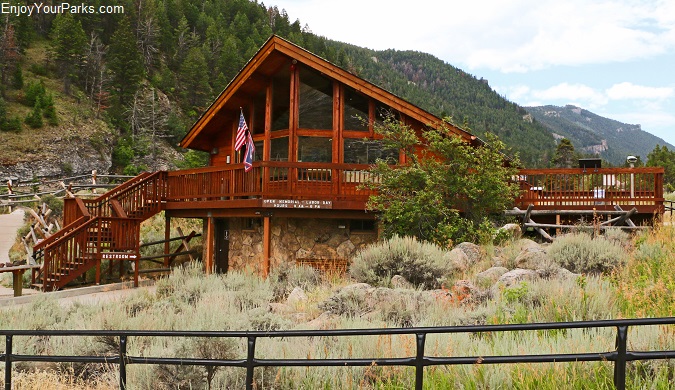 The Sinks Canyon State Park Visitor Center is located at "The Sinks", which is where the Popo Agie River disappears into the underground cave.  The visitor center provides excellent geological, wildlife and recreation exhibits, as well as offers viewing areas and interesting interpretive signs about the local wildlife.
Next to the visitor center are pathways that take visitors to either The Sinks Overlook or The Sinks Cavern. 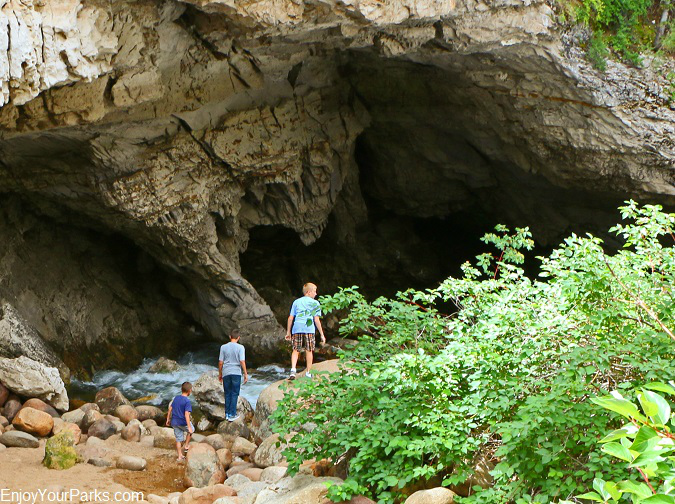 "The Sinks Cavern" is where the Popo Agie River disappears into the ground.

"The Sinks" cavern is part of the geological formation known as the Madison Limestone Formation that can be found in outcroppings throughout the West.  The limestone at Sinks Canyon State Park had been 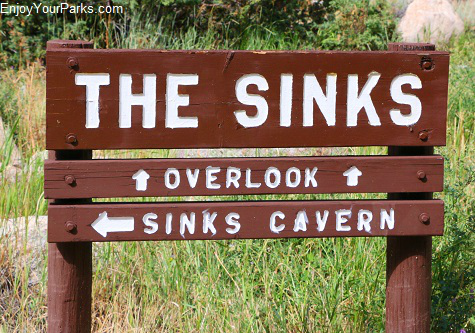 carved by glaciers, and through thousands of years of water erosion, an extensive cavern was created.

This cavern is where the Popo Agie River flows into and disappears for about a quarter of a mile.

The precise route this underground section of the Popo Agie River takes is still unknown, but dye tests have helped geologists determine that it takes the water over 2 hours to reach the other end of the cavern, where the Popo Agie River re-emerges at "The Rise".

Sinks Canyon State Park is part of a huge ecosystem that surrounds and includes the Wind River Mountains.  The high peaks receive over 200 inches of snow each year, and the snow and rain that
falls here covers over a 190 square mile area that ends up flowing into what is known as the Middle Fork Watershed. 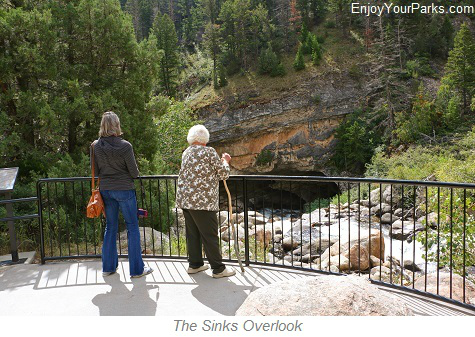 The Middle Fork Watershed is part of a large ecosystem that includes towering peaks, alpine meadows and forests, conifer forests, aspen meadows and foothills that are covered in junipers.

The Sinks Canyon State Park contains a portion of the Middle Fork of the Popo Agie River, which begins high in the Wind River Range. 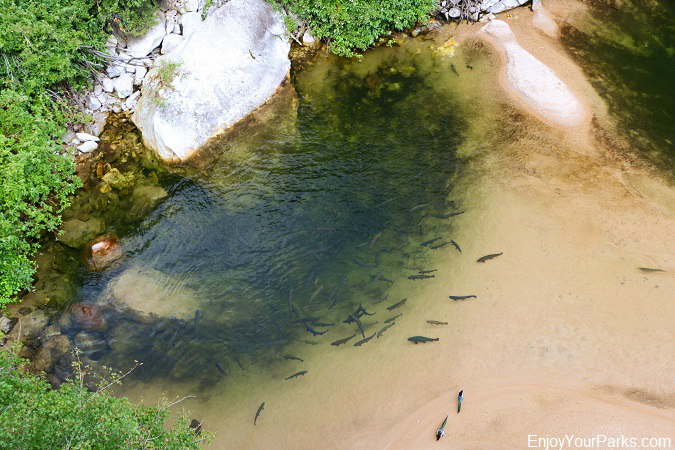 This is a view of "The Rise" from "The Rise" Observation Deck.  This is where the Popo Agie River re-emerges about a quarter of a mile downstream of "The Sinks". Notice all of the huge trout swimming in the water! 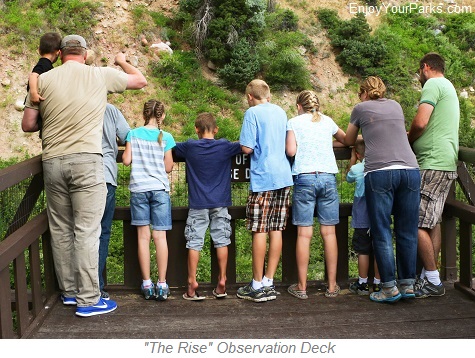 The Popo Agie River re-emerges a quarter of a mile downstream into a calm pool known as "The Rise".

This pool is usually filled with rainbow trout and brown trout, and is a fascinating place to visit and explore.

Some of these trout have been estimated to weigh up to 12 pounds, but don't get too excited because fishing is not allowed at "The Rise".

There is an observation deck located at "The Rise", as well as interesting interpretive signs. There is also fish food dispensers located here. 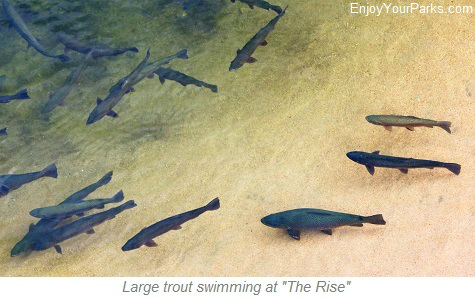 There is also a short trail that takes visitors to the actual edge of the cavern where the river vanishes underground.

Before the river disappears, it flows over large boulders, and then curves back along a natural arch. At the cavern opening, the water sinks out of view into a complex network of smaller, unexplorable caves. There is an "overflow bed" that is found above ground, where during heavy spring run-offs, water flows through this stream bed above the underground river.  However usually this is simple a dried streambed, and there is a trail that takes you this overflow channel. 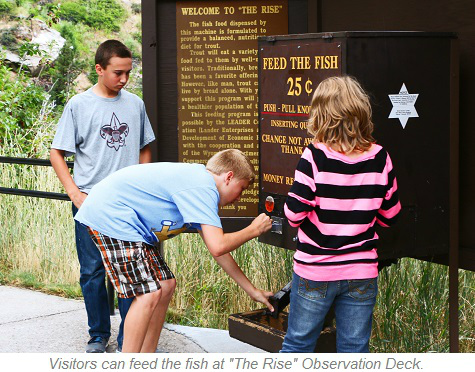 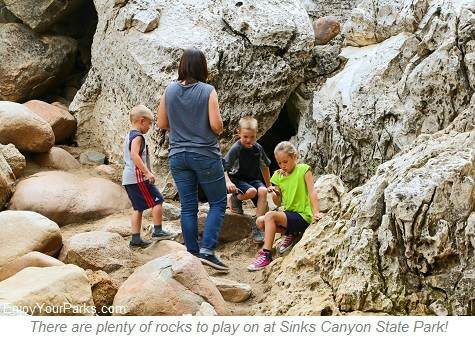 The Canyon Trail
In addition to the Sinks To Rise Trail, there are three other main trails located within the Sinks Canyon State Park borders.  The Canyon Trail is a 4 mile loop located between the Popo Agie Campground and Sinks Campground. 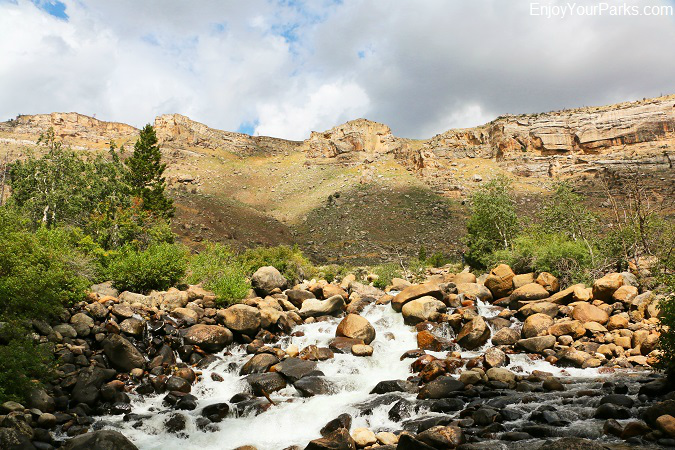 The further you boat upstream from Ok-A-Beh Marina, the taller the cliffs become. 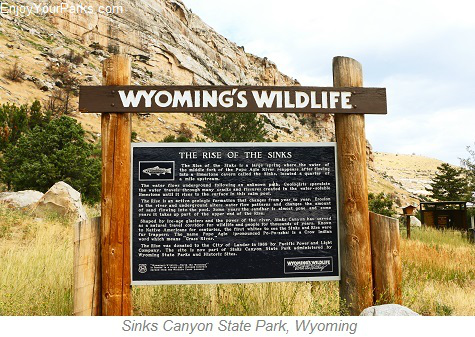 Rock Climbing Opportunities
On each side of Sinks Canyon are towering canyon walls that are enjoyed by skilled rock climbers.  If you look carefully, you'll see some of these daring climbers high above you on these steep rock walls.

The Name "Popo Agie"
Popo Agie is a Crow Indian name that is pronounced, "po po shuh".  This Crow Indian name was given to this river many, many years ago, and it possibly means, "Tall Grass River" or "Gurgling River", depending on who you talk to.

Many feel the Crow's interpretation is the latter, as the river actually makes a "gurgling" sound as it enters the underground cavern.

Amazing Wildlife
There is amazing wildlife found throughout Sinks Canyon State Park, including mule deer, golden eagles, squirrels and the occasional porcupine.  Among the most fascinating animal found in the park are Rocky Mountain Bighorn Sheep, which are ALWAYS a very special treat to see! 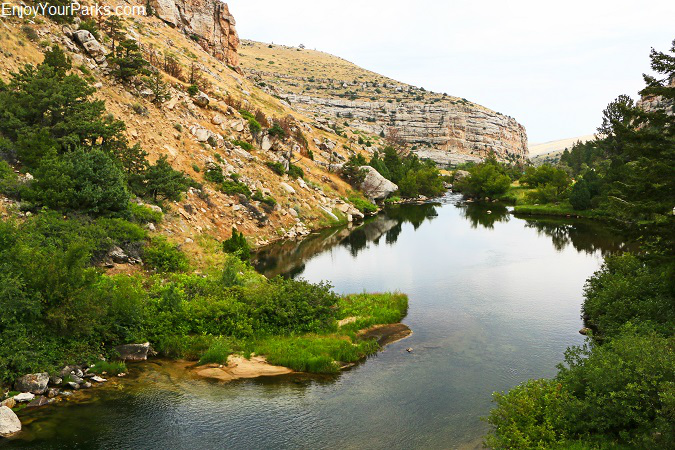 A view of Sinks Canyon from "The Rise" Observation Deck. 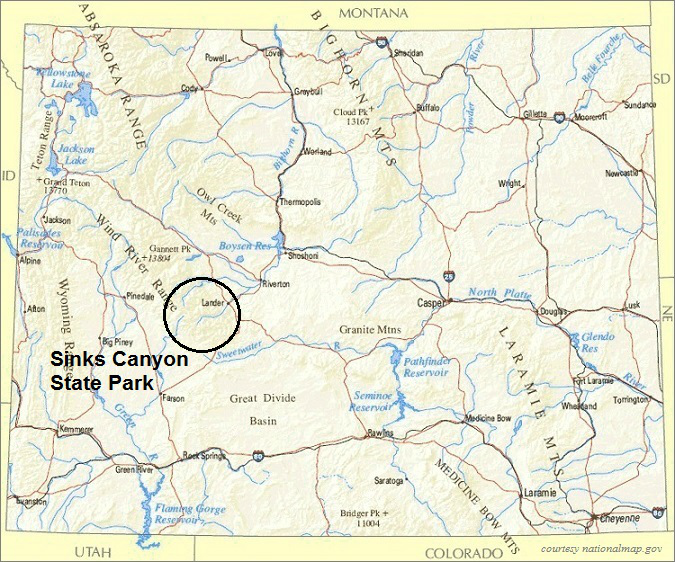