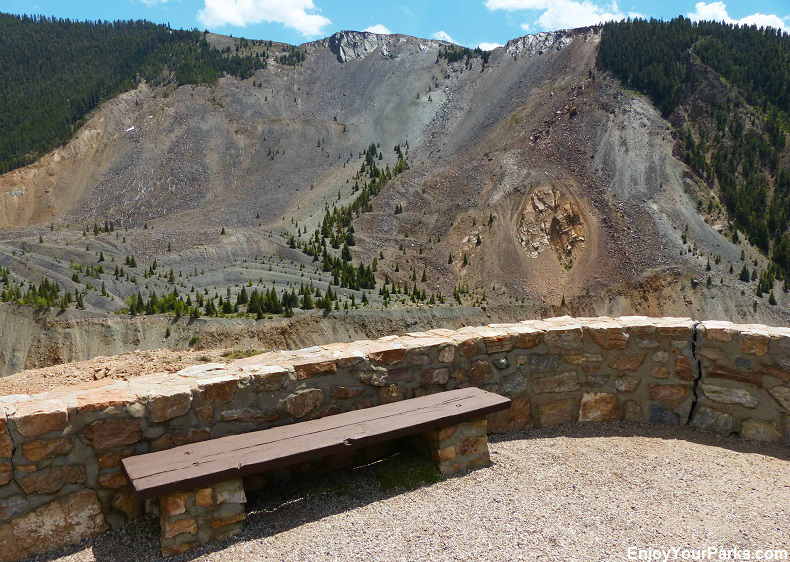 "A Night of Terror" 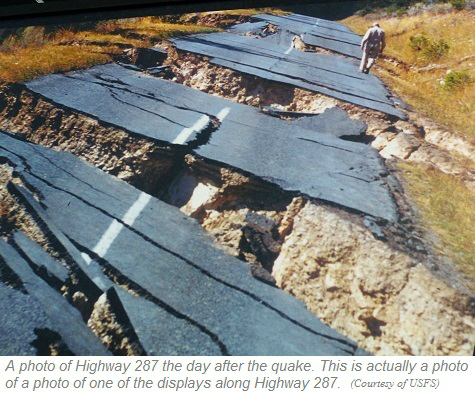 At 11:37 pm on August 17, 1959, one of the strongest earthquakes in American history hit southwest Montana, causing significant damage and killing 28 people. The size of the quake was measured between 7.5 and 7.8 on the Richter scale, which is only rivaled by the "Good Friday Earthquake" in Alaska in 1964, which registered as a 9.2 magnitude quake.

Known as the "Hebgen Lake Earthquake", the epicenter was located in the Madison Valley near Hebgen Lake, which is located about 15 miles north of West Yellowstone, Montana.

The quake violently shook the area for over 40 seconds, causing many millions of dollars worth of damage and the loss of 28 lives.  People felt this earthquake as far away as Salt Lake City, Utah and beyond.

Even though there was significant damage and loss of life in the neighboring states of Wyoming and Idaho, by far the majority of the damage occurred closest to the epicenter.  The north shore of Hebgen Lake instantly rose 8 feet and the south shore dropped 8 feet as a huge area of earth instantly tilted as much as 20 feet.  This 20 foot fault scarp can still be seen today, as it stretches for miles.  Cabins along the north shore with people sleeping in them were instantly covered in water, as well as large sections of the highway, as Hebgen Lake shifted it's shoreline.  The stories from the survivors of how they were awakened to a wall of water covering their cabin and how they escaped in total darkness sends shivers down anyone's spine. 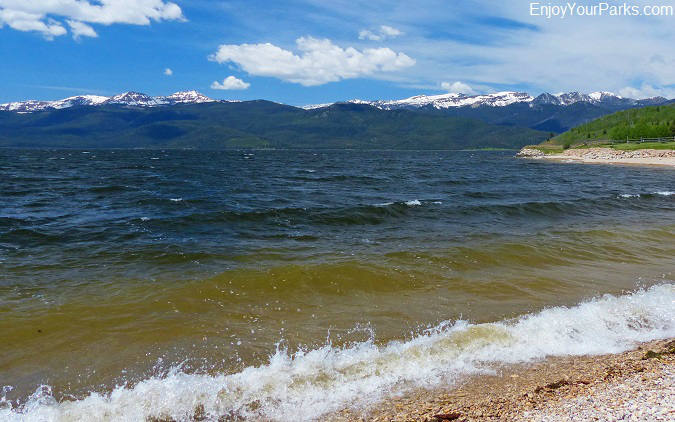 Hebgen Lake is a popular lake, and was formed in 1914 by the construction of the Hebgen Lake Dam which dammed the Madison River, and was dramatically affected by the earthquake.

Today, Hebgen Lake is an extremely popular vacation destination, but there are still a few cabins still halfway under water to remind us of that horrifying night in 1959, even though most of the cabins are now long gone.  This beautiful lake provides great fishing, as well as any other water sport you can think of, such as water skiing, canoeing, kayaking and swimming.  There are several campgrounds and resorts found throughout the area, and is truly an outdoor person's paradise. 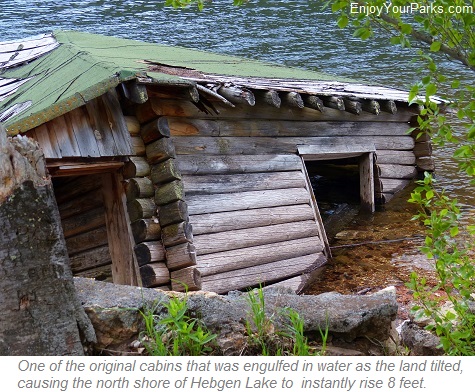 The most devastating damage occurred immediately downstream of Hebgen Lake, where 80 million tons of rock broke off a mountain and crashed into the Madison Valley, instantly wiping out a campground that was full of campers as they slept, killing all 21 campers.  The loud "boom" created as this huge landslide hit the valley floor shook windows far beyond towns like Ennis Montana, which is 46 miles to the north.   This gigantic landslide hit so fast that hurricane force winds were created that were strong enough to toss cars like toys.

Because there was great concern that the earthen-made Hebgen Lake Dam (built in 1914) was going to collapse due to the earthquake, the people living downstream along the Madison River, including the entire town of Ennis Montana, immediately evacuated their homes and fled to the high hills above the town.

One of David's childhood friends was living in Ennis when the quake hit, and he recalled hearing the loud "boom" and his parents grabbing him and his siblings and frantically running for higher ground in the darkness, along with the rest of the residents of Ennis.  Thankfully the dam held. 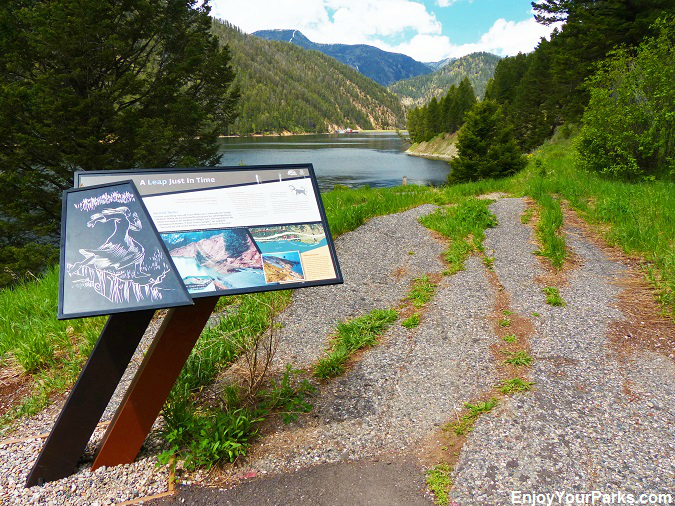 This is a recent photo of an old section of Highway 287.  You can still see where the highway ended abruptly from being engulfed by Hebgen Lake as the land began to tilt and the shoreline shifted during the 1959 earthquake. 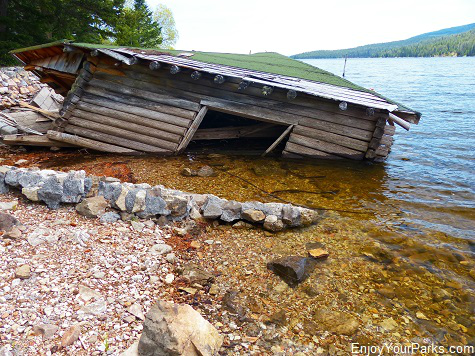 David's family was in Yellowstone Park that August, and finished their vacation just two days before the Hebgen Lake Earthquake hit.

David's parents recalled that even though they were back in Central Montana, hundreds of miles away, the quake was so strong that they had to take the kids off their top bunk beds because there was so much shaking.

The Collapse of a Mountain
The earthquake triggered a disastrous collapse of a mountain a few miles downstream from the Hebgen Lake Dam, and this massive landslide instantly dammed the Madison River, creating what is now called Earthquake Lake, a.k.a. Quake Lake.

Along the north shore of Earthquake Lake, along Highway 287, you can still see the remnants of the forest that ended up being covered in water as the lake quickly filled.  The Army Corps of Engineers immediately began digging a channel to allow the Madison River to once again flow,  which took over a month to accomplish this project. "Quake Lake", which is officially named Earthquake Lake,  remains to this day, and is a constant reminder of what happened on that infamous night of August 17th,1959. 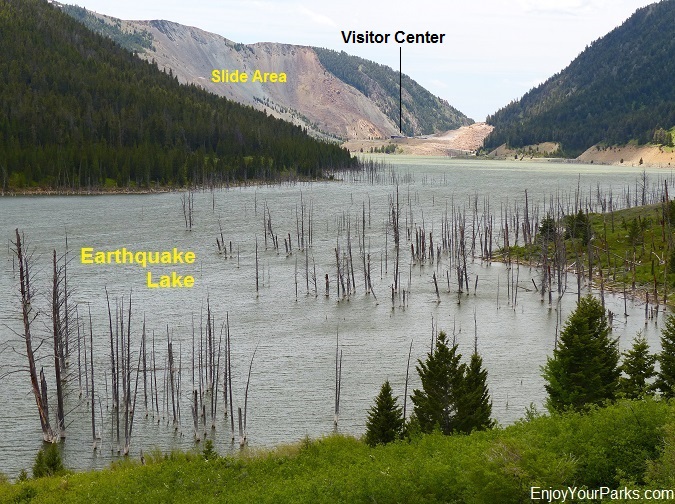 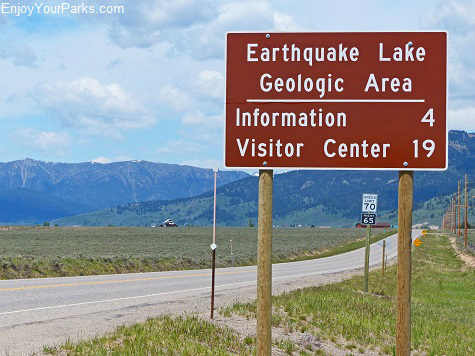 This 20+ mile stretch of road takes you back in time to that horrifying night in 1959.

There are several fascinating pullouts and turnouts with very well done displays where the Hebgen Lake Earthquake still shows its presence on the landscape.

One of the turnouts even take you onto a paved pathway to some of the cabins that were instantly covered in water as Hebgen Lake's north shore rose 8 feet as a result of the landscape tilting during the quake. 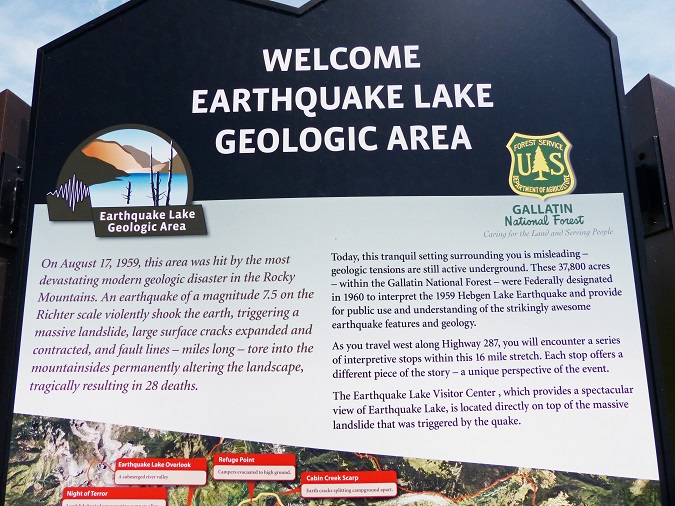 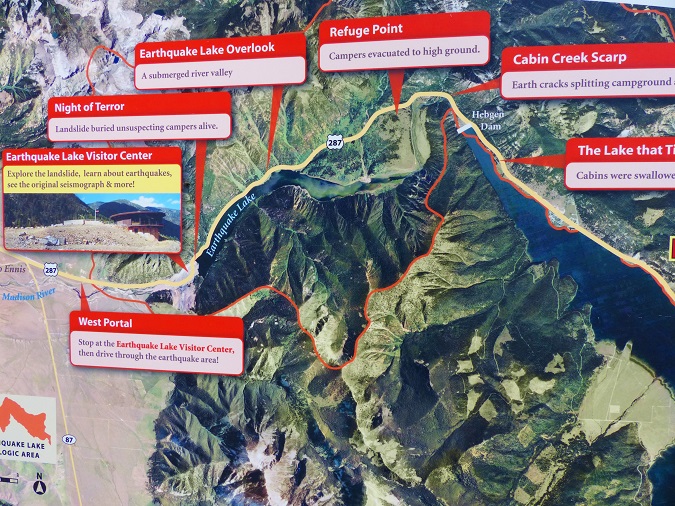 This is a photo of one of the displays along the Earthquake Lake Geologic Area.  (Courtesy of U.S. Forest Service) 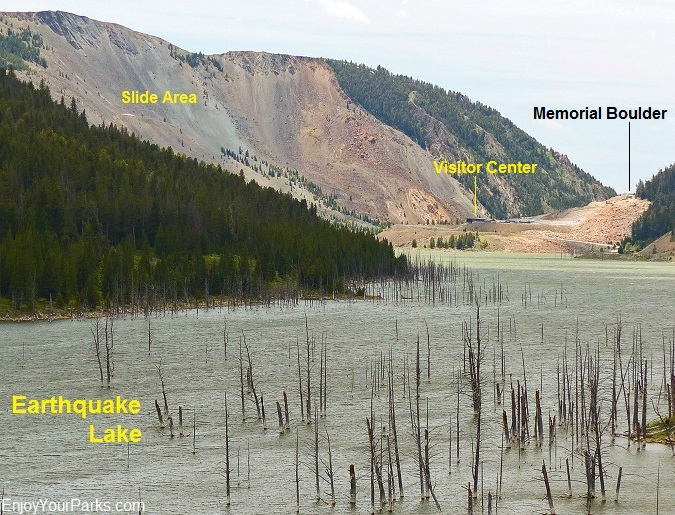 Earthquake Lake was caused by a massive rock slide during the Hebgen Lake Earthquake of 1959.

As you drive along the shore of Earthquake Lake, you will see many of the dead pine trees that were once a forest before the Hebgen Lake Earthquake.  When the earthquake hit, a mountain literally collapsed and dammed the Madison River, creating Quake Lake.  The dead trees are haunting reminders of the devastation and loss of life on this terrifying night. 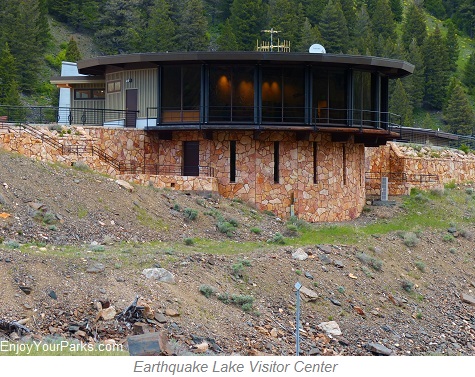 At the location of this devastating landslide rests the National Forest Service's Earthquake Lake Visitor Center.

Built in 1967, and newly remodeled in 2014, this extremely fascinating visitor center provides interpretive services for over 50,000 visitors each year.

Located on U.S. Highway 287, the visitor center is about 27 miles north of West Yellowstone and 44 miles south of Ennis Montana. 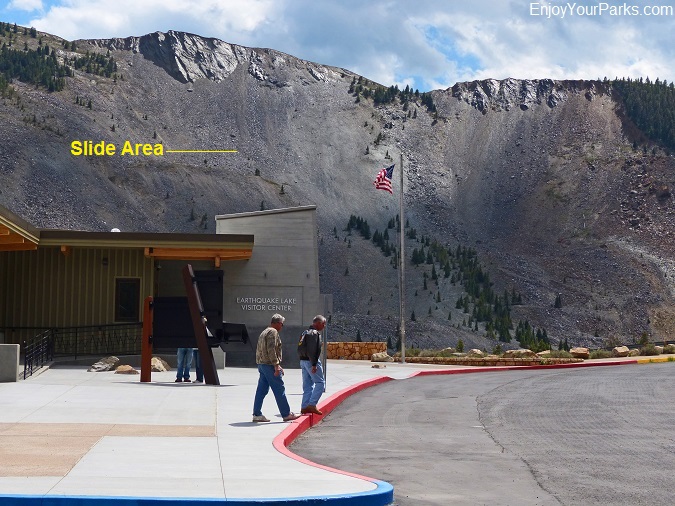 Earthquake Lake Visitor Center provides an excellent view of where the mountain collapsed. 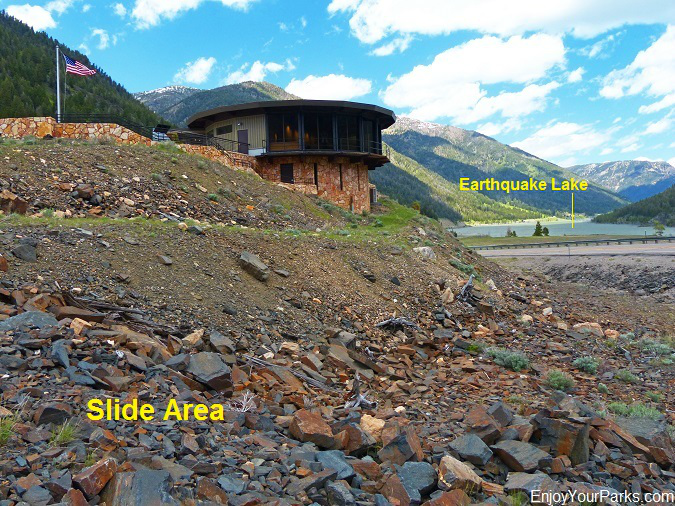 The Earthquake Lake Visitor Center is built on the actual slide area. 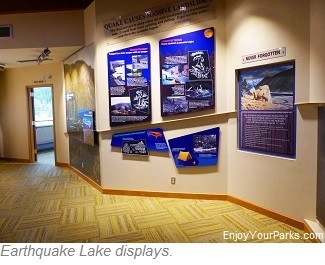 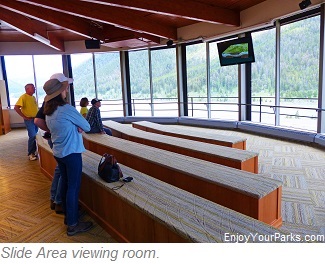 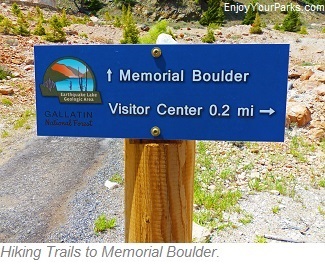 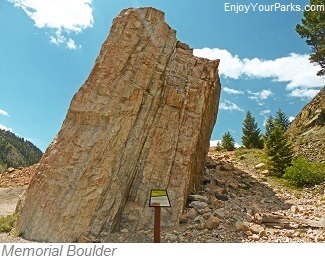 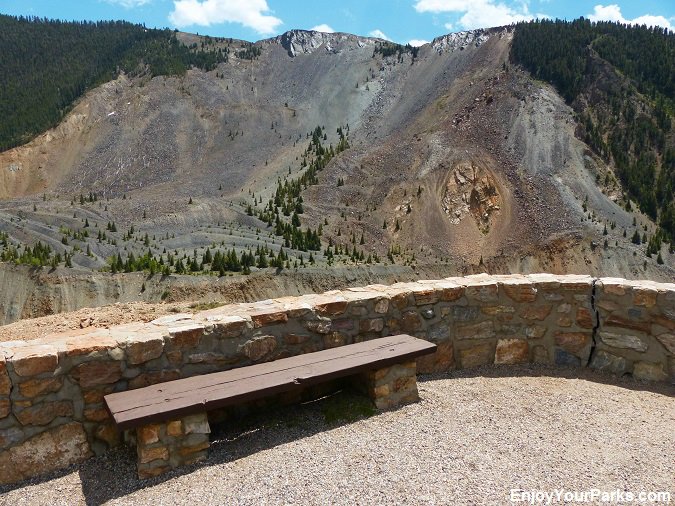 There are several trails near the visitor center that take visitors up the other side of the slide area, which gives visitors an incredible view of where the mountain collapsed. 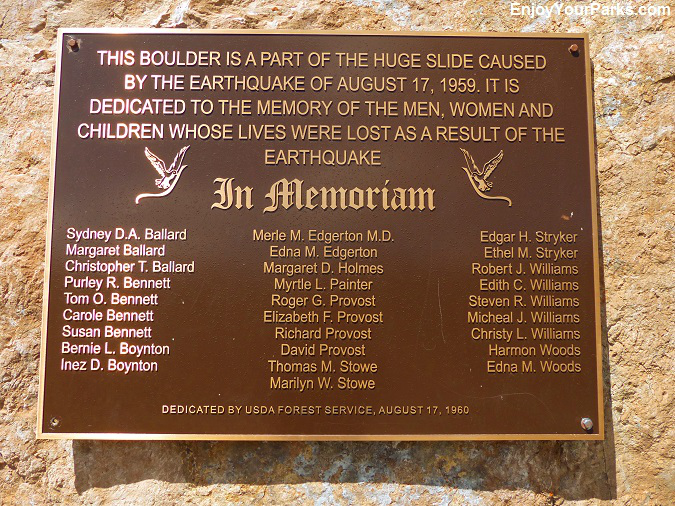 This memorial plaque on "Memorial Boulder" of the people who lost their lives during the earthquake.... most of them were in the campground directly below the mountain that collapsed.

Top Things To Do In Montana: Earthquake Lake Geologic Area 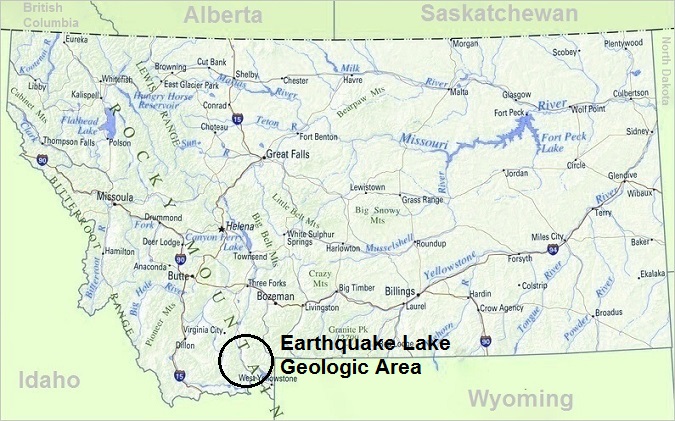