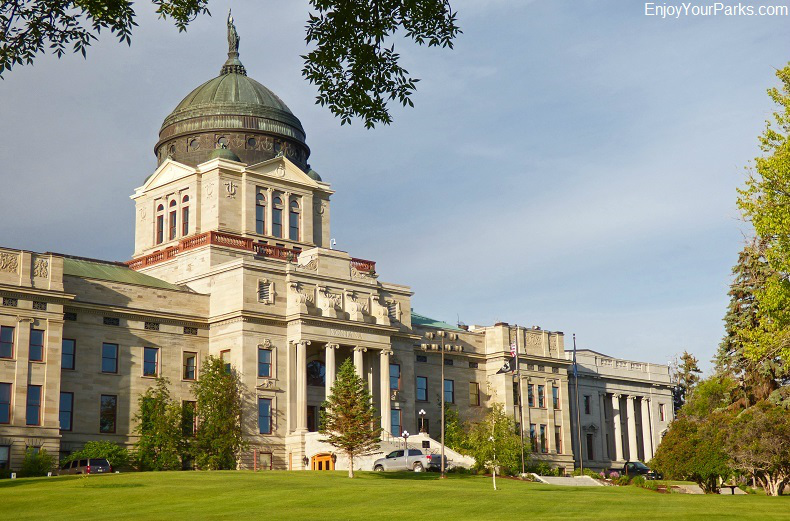 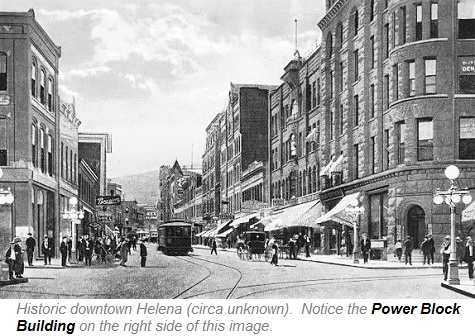 Helena Montana is not only the state capital of Montana, but is also "swimming" in incredibly fascinating Old West history.  Established during the "Gold Rush Years" of the early 1860's, Helena was originally founded by "The Four Georgians".  On July 14, 1864, these four miners (only one was actually from Georgia) discovered gold in Last Chance Gulch, which is now the main street of downtown Helena.  This gold discovery triggered an amazing boom of culture and buildings that lasted well over 30 years.

The city of Helena, Montana grew along Last Chance Gulch, from south to north, and the architecture along the gulch became incredibly elaborate.  Today most of these wonderfully preserved commercial buildings still stand, as well as many of the mansions and other homes that were built near downtown Helena.  There are walking tours as well as trolley and "train" tours of this historic district, and is a very popular attraction for visitors who are interested in Old West history. This entire area, known as the Helena Historic District, is a federally designated historic district that is a fascinating place to discover and explore. 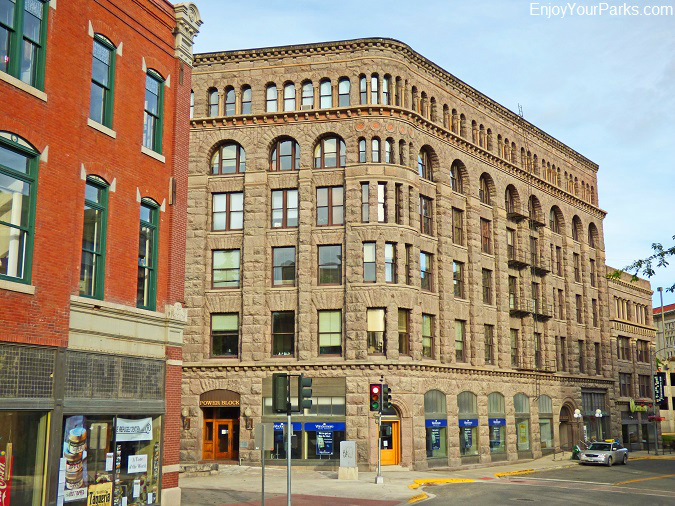 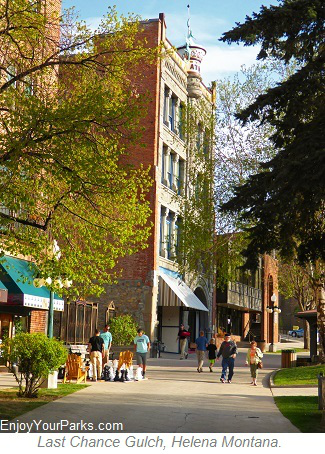 The commercial buildings in this historic district are amazing.  From the French Renaisance structures such as the Colwell Building, Beaux Arts, Parchen Drug Building and Penn-Block Bristol Hotel, to the Romanesque Revival, represented by the Sands Brothers Dry Goods and Denver Block.

By the middle of the 1880's, there were over 15 architectural firms in Helena.  Some of the main architectural firms consisted of architects that went to the prestigious Chicago School of Architecture, and this influence became quite apparent with the design of some of the major commercial buildings of the 1880s such as the Securities Building, Power Block, Lewis and Clark County Courthouse and the Atlas Building.

During what was known as the "Panic of 1893", much of the mining abruptly stopped, which resulted in a change in commercial building styles due to economic reasons.  The newer buildings, beyond 1893 were much shorter and less ornate.... and many of them even had a false front.  In 1928, there was a major fire that destroyed a fair number of the original buildings, and several of the downtown historic buildings were either damaged or destroyed during the Helena Earthquake of 1935.

However, many of the original historic buildings still remain, and the walking tours or trolley tours make their way through this historic district all summer long. 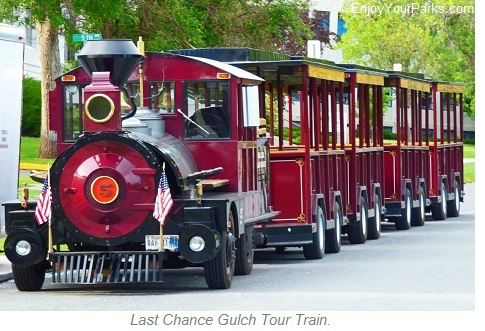 There are several options for visitors to explore the Helena Historic District, which includes Last Chance Gulch. There is a walking tour, trolley tour, and a fun train tour that takes visitors on a wonderful adventure through history as they show you all the major landmarks and share with you the fascinating history of Last Chance Gulch. The Historic District of Helena is so fascinating, we highly recommend that you take the time to explore it if you are in the area during your Montana vacation. 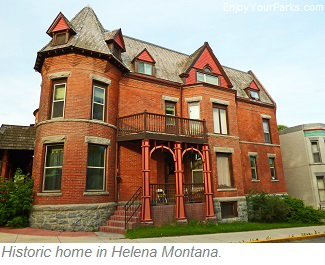 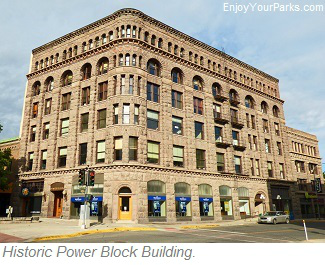 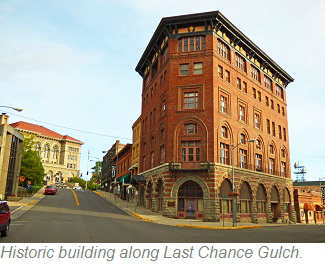 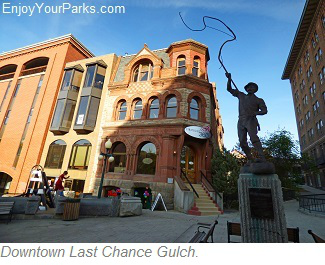 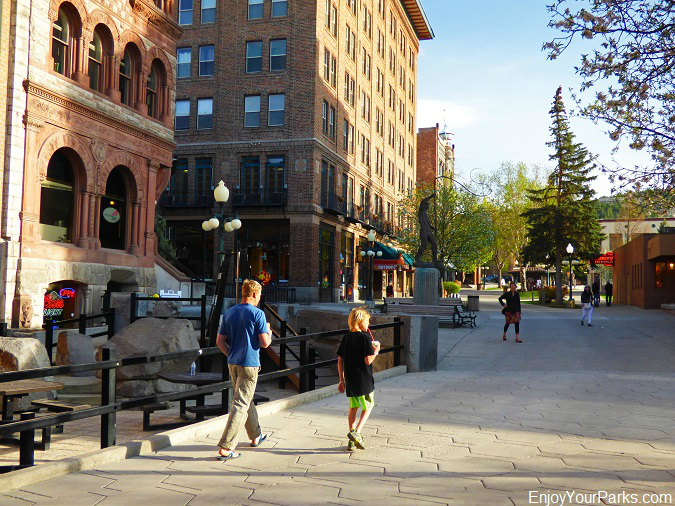 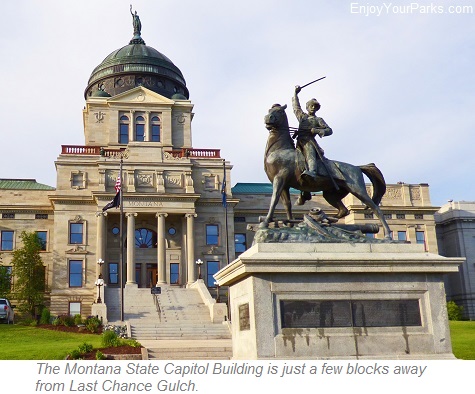 The Montana Capitol Building was built between 1896 and 1902, with the wing annexes added between 1909 and 1912.  Made of Montana granite and Montana sandstone, its Greek "neoclassical" design is listed on the National Register of Historic Places.  The giant dome is made of copper, which is fitting for montana, as it was at that time the "Copper King" of the world as Butte Montana was producing most of the world's copper at that time.

But without question, the most significant piece of art in the Montana Capitol Building is the painting by the world-renowned "Cowboy Artist" by the name of Charles M. Russell. 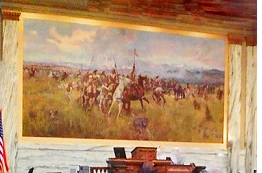 The State of Montana was extremely fortunate that Mr. Russell painted a remarkable masterpiece depicting Lewis and Clark meeting the Bitterroot Salish Indians of Montana in 1912 for the Montana State Capitol Building. This huge 25 feet high and 12 feet wide oil painting is entitled "Lewis & Clark Meeting the Flathead Indians at Ross' Hole".

This masterpiece of Western art is displayed in the House of Representatives Chamber, directly above the Speaker's chair.  For more information on Charles M. Russell and his art work, visit our page on the amazing C.M. Russell Museum that is located in Great Falls Montana.  The Montana State Capitol Building is located just a few blocks from Last Chance Gulch, and many of the Last Chance Gulch tours originate across the street from this historic capital building. 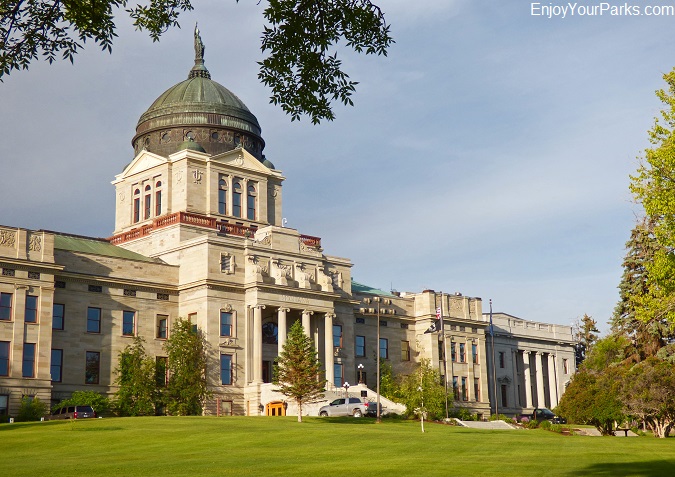 The Montana State Capitol Building was built between 1896 and 1902. 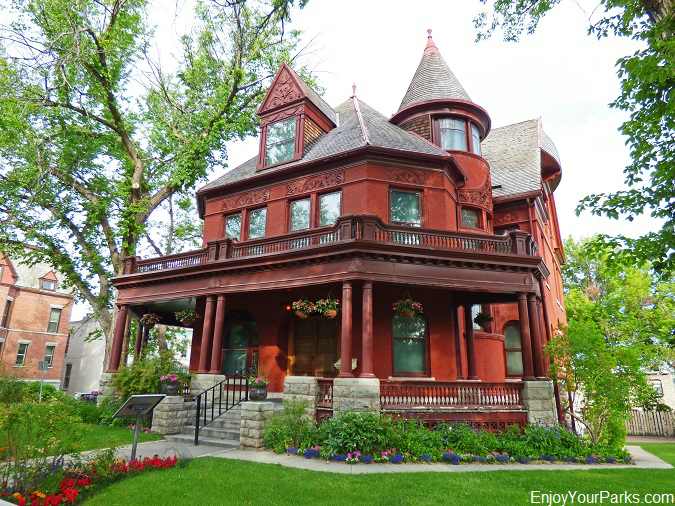 The historic Original Governor's Mansion offers daily tours, and is only one block from Last Chance Gulch.

The Original Montana Governor's Mansion is located just about a block from Last Chance Gulch, and is very much worth exploring.  Built in 1888, one year before Montana became a state, and is listed on the National Register of Historic  Places.  This historic mansion was home to nine governors and their families between 1913 and 1959.  There are daily tours of this amazing home during the summer season. 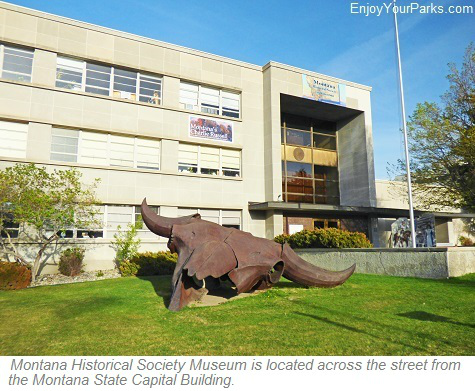 Located just across the street from the Montana Capitol Building, the Montana Historical Society Museum is a "must see" while visiting Helena, Montana.

In addition to a host of many other wonderful displays throughout the museum that are very much worthwhile to see, the museum features a 2,000 square foot exhibit gallery that displays the art of Montana's "Cowboy Artist" Charles M. Russell (1864-1926).

There are approximately 80 pieces of art, from major oils, pen and inks, watercolors, sketches, sculptures and bronzes.  And if you would like to see more Charles M. Russell works, make sure you see visit the world renowned C.M. Russell Museum in Great Falls Montana, where the largest collection in the world of Charles M. Russell works of art are waiting for you and your family to enjoy. 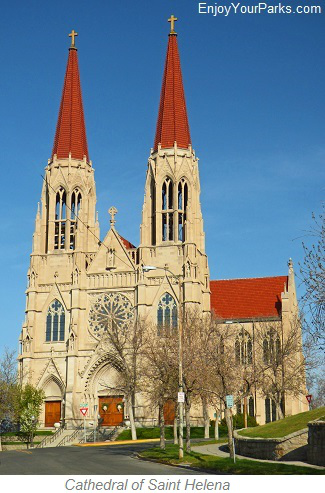 Located just above Last Chance Gulch in the heart of the city of Helena Montana rests the impressive Cathedral of Saint Helena.  Built between 1908 and 1924, this gigantic Catholic cathedral was designed by architect A.O. Von Herbulis of Washington D.C.  He was chosen by the Catholic Church to design and built this magnificent cathedral as he had vast knowledge of the cathedral architecture of Europe.  He studied in
Vienna, Austria, and built the Cathedral of Saint Helena in the classic Gothic form.  The cornerstone was laid in 1908, and the first mass was celebrated in 1914, even though the cathedral was not completed for another 10 years.

One of the many stunning features of this huge structure are the stained glass windows.  Made and installed by the F.X. Zettler Firm of Munich, Bavaria, where a magnificent 37-window set tells the story from the fall of Adam and Eve all the way to the beginning of the Church in the early 20th century.  There are 59 huge stained glass windows in total, and are in itself worth exploring this amazing work of Gothic architecture.

The stained glass windows for the Cathedral were made and installed by the F.X. Zettler Firm of Munich, Bavaria. By the time the Cathedral was dedicated, 46 of the planned 59 windows had been installed. The Zettler Firm claimed that the 37-window set, which told the Christian story from the fall of Adam and Eve to the Church in the early years of the 20th century, surpassed any windows which it had made during its first 50 years. The remaining windows in the clerestory level were installed by 1926. 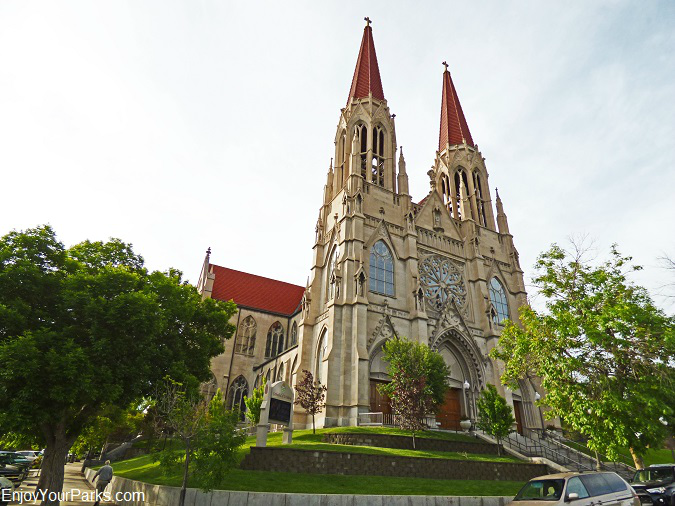 n 1935 there were a series of earthquakes in Montana that caused  significant damage to the Cathedral of Saint Helena.  The south tower was destroyed but was rebuilt by 1938.  The interior of the Cathedral remained completely unchanged until the mid 1950's, when a large bronze altar canopy was installed. The Cathedral of Saint Helena is a dramatic display of European Gothic architecture, and is very much worth visiting during your time in the Helena Montana... especially if you like huge, beautiful cathedrals! 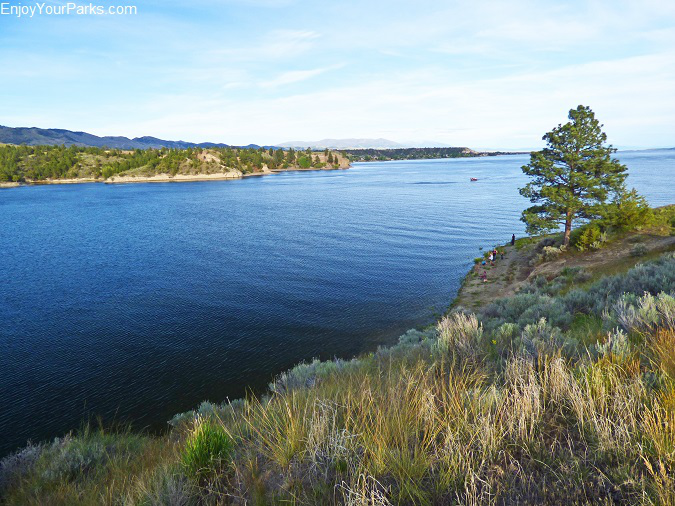 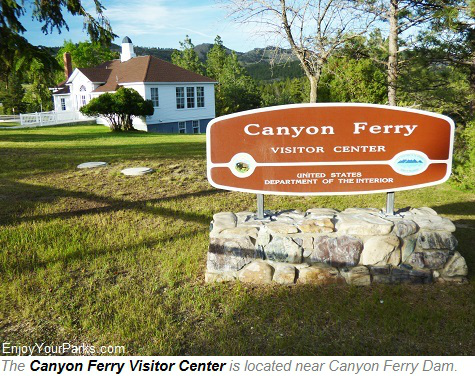 Manage by the Bureau of Reclamation, Canyon Ferry Lake near Helena, Montana is one of Montana's most popular recreation areas due to its size and location... being close to Butte, Helena and Great Falls.

Only about 20 miles east of Helena, Canyon Ferry Lake is the result of the 1954 damming of the Missouri River by the Canyon Ferry Dam, and is the third largest body of water in Montana.

This massive reservoir has 76 miles of shoreline, covers 35,181 acres and is nearly 30 miles long.  Not only was the Canyon Ferry Dam built for purposes of water irrigation, flood control and hydro-electric power, but the lake it created is an outdoorsman's paradise. There is fantastic fishing, water skiing, sailing, kayaking and swimming opportunities throughout the lake, and there are several marinas and campgrounds found along its shores. In the past decade or so, Canyon Ferry has also become a national leader in ice-boat racing and iceboat world speed record challengers. Canyon Ferry Lake rests directly below the Big Belt Mountains to the east and Elkhorn Mountains to the west, which provide scenery as you enjoy the water and camping facilities of Canyon Ferry Lake. 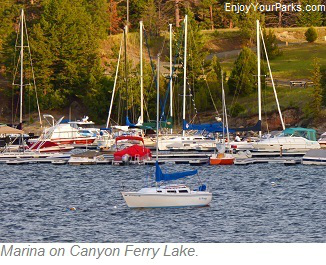 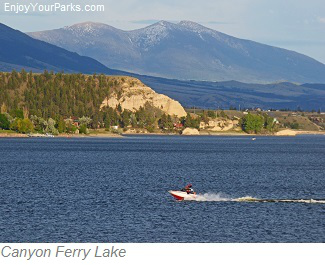 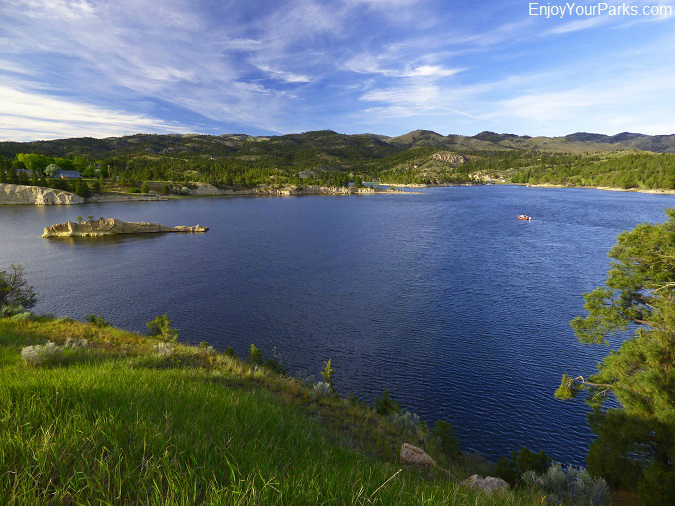 Canyon Ferry Lake has over 76 miles of shoreline, and is an extremely popular Montana vacation destination for water sport enthusiasts. 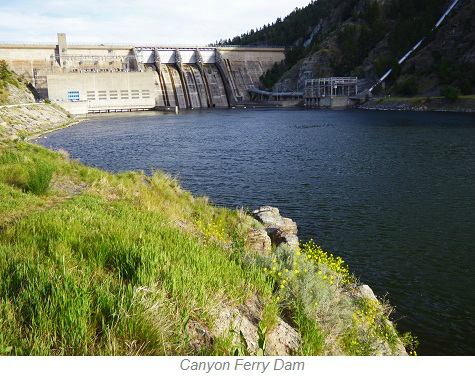 Canyon Ferry Dam was built in 1954, and is a concrete "gravity" dam that blocks the Missouri River in a narrow valley where the Big Belt Mountains merge with the Spokane Hills.  The Canyon Ferry Dam is located about 70 miles downstream from where the Missouri River Headwaters are located near Three Forks, Montana. This massive dam is 225 feet tall and is 1,000 feet in length, and is made of 414,400 cubic yards of concrete. There are three 16.5 MW Francis turbine generators that can generate 50 MW of power.  At its normal water level, Canyon Ferry Lake contains 1,891,000 acre feet of water!  Located only 20 miles northeast of Helena along U.S. Highway 12, Canyon Ferry Lake is definitely a place to discover and explore if you and your family is into water sports or are fascinated by history and dam construction.

Gates of the Mountains

Gates of the Mountains is located about 20 miles north of Helena, Montana.

The Gates of the Mountains is located off Interstate 15, about 20 miles north of Helena Montana along the Missouri River.  This extremely deep and narrow canyon is home to huge limestone cliffs of the Big Belt Mountains.  This incredibly scenic area is also very historic, as this special place was named by the Lewis and Clark Expedition. On July 19, 1805, on a hot summer evening, was moving upstream on the Missouri River.  Because the canyon walls were all cliffs, they were forced to row their boats rather than tow them from shore. 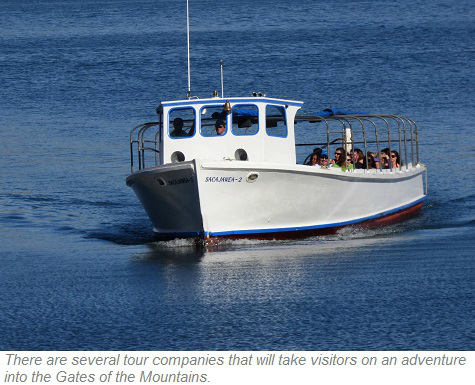 They made their way to an amazing spot where the limestone cliffs towered 1,200 vertical feet above them. Captain Lewis wrote in his journal, "This evening we entered much of the most remarkable cliffs that we have yet seen.  these cliffs rise from the waters edge on either side perpendicularly to the height of 1200 feet...the river appears to have forced its way through this immense body of solid rock for the distance of 5-3/4 miles.... At each bend in the waterway, great stone walls seemed to block passage, only to open like gentle giant gates as the expedition drew near.  I shall call this place Gates of the Rocky Mountains."

This name stuck, and visitors have been adventuring down these waters for over 200 years now to see what Lewis and Clark described in their journal of 1805 for themselves.  There are several tours that take visitors through this narrow canyon, and you will see this giant gate "open and close" as you pass through. It's really quite an experience and we always enjoy.  Nicholas Hilger began organized tours in 1886, and there are now several tour companies carrying on his tradition. 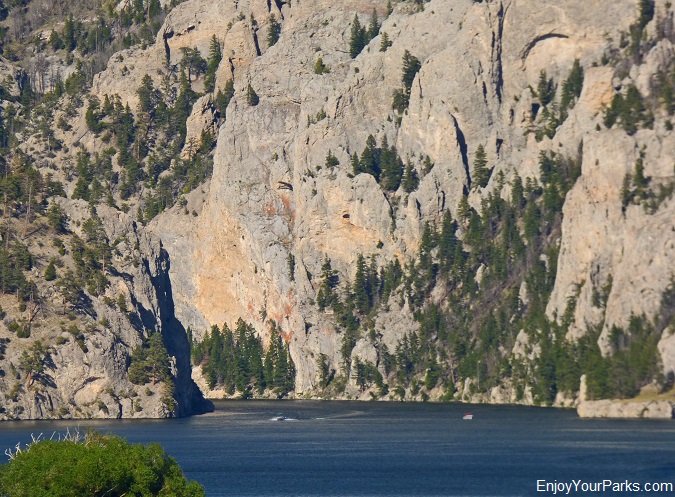 Top Things To Do In Montana: Helena Area Attractions 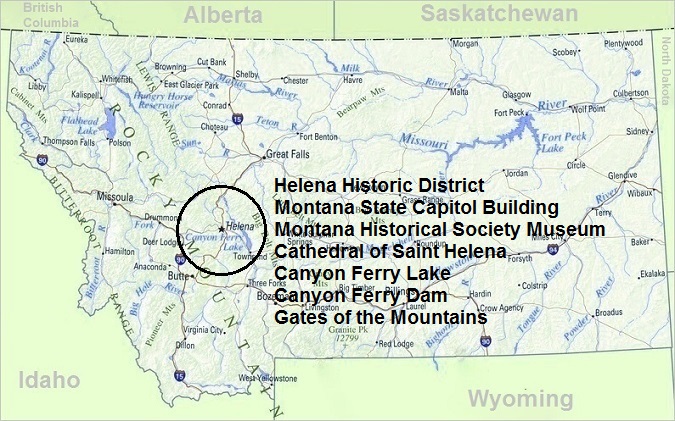