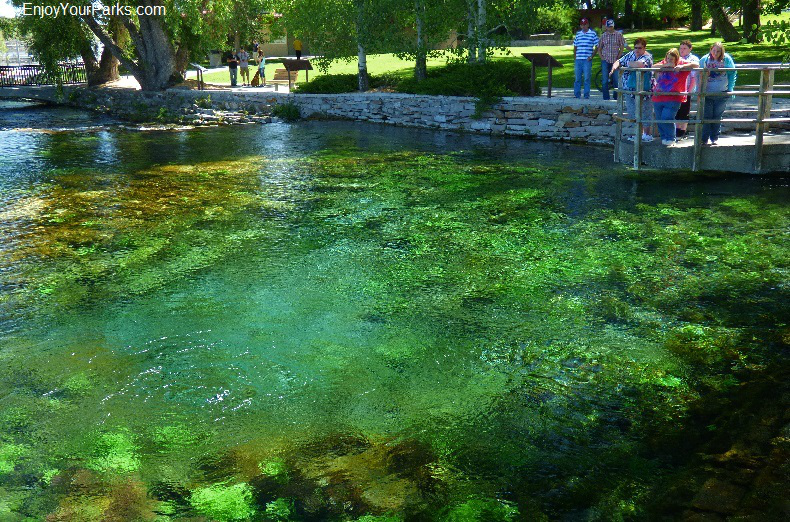 The City of Great Falls is home to some of the most popular attractions in Montana, and is definitely an important place to explore as you discover this great state.  There is so much history here and so many things to do, we will narrow our scope to the three most popular tourist attractions in the area, which include Giant Springs State Park, Lewis and Clark Interpretive Center, and the Charles M. Russell Museum Complex.  These three attractions are fascinating and unique, and a large number of visitors each year flock to Great Falls Montana to see these "gems" of Montana. 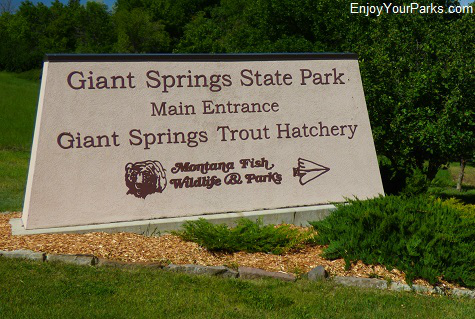 More than a quarter million people each year visit Giant Springs State Park, which makes it the most visited State Park in Montana. Discovered by Lewis and Clark in 1805, Giant Springs is one of the largest freshwater springs in the United States.  156 million gallons flow out of these amazing springs each day, and the water stays at the constant temperature of 54 degrees (F).

The water comes from the snow melt in the Little Belt Mountains, which rest over 60 miles away.  It takes 26 years for the water to travel from these central Montana mountains to reach Giant Springs!

Before the discovery of Giant Springs by Lewis and Clark, the Blackfeet Indians would use the springs as an easy water source during the winter months. 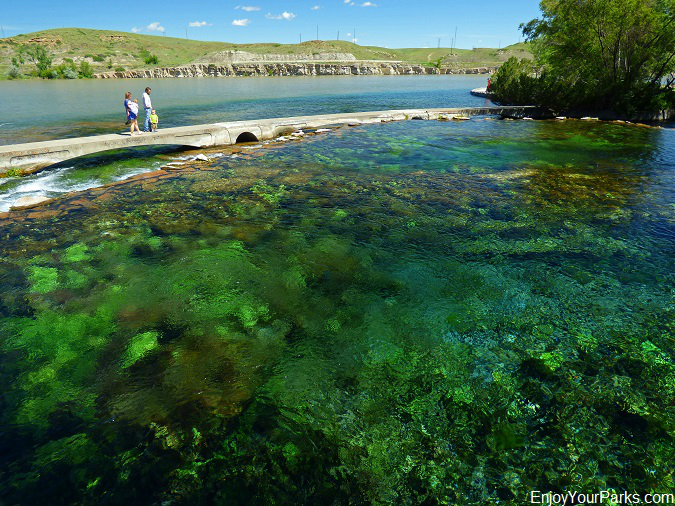 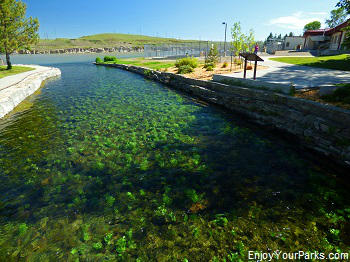 The Roe River flows out of Giant Springs, and was at one time listed in the Guinness Book of World Records for being the shortest river in the world.  The Roe River is only 201 feet long, as it flows from the Giant Springs into the Missouri River, and has a maximum depth of approximately 8 feet.  The world's second shortest river is the D River near Lincoln City Oregon, with the length of 440 feet. However, not to be outdone, the people people of Lincoln City remeasured the D River at 120 feet during an extremely high tide.  In the end, the Guinness Book of World Records decided to discontinue their listing of the "World's Shortest River", in part because of this dispute.

The Giant Springs Fish Hatchery is located right next to the springs, and is a Montana State Trout Hatchery.  This hatchery raises Rainbow Trout, and there is a "show pond" where you can see the large mature fish swim, and the public is welcome to feed the fish with special fish food.  This is a popular place for families with young children, as they love to feed the fish! 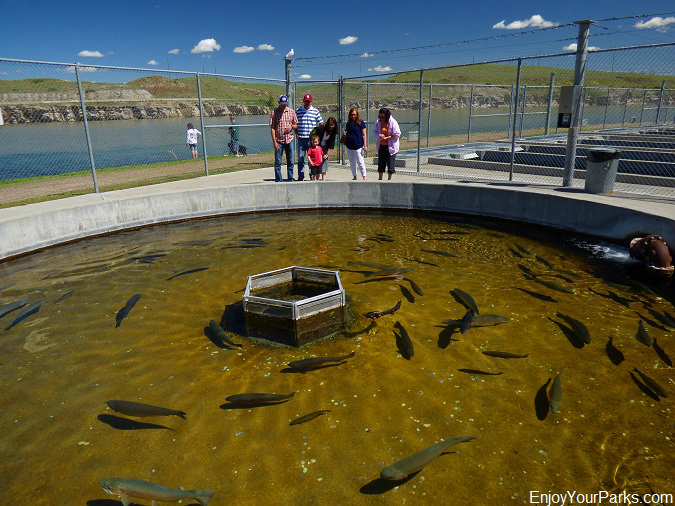 The Rivers Edge Trail runs along the Missouri River, with a portion of this very well maintained scenic trail cuts through the Giant Springs State Park.

Click Here for the Location of the Rivers Edge Trail

This trail is very popular among the locals and visitors alike, and runs for several miles along the south and north banks of the Missouri River. Much of this trail is paved, and takes you to the nearby Rainbow Falls Overlook and the Lewis and Clark Interpretive Center, just to name a few fascinating destinations and overlooks. 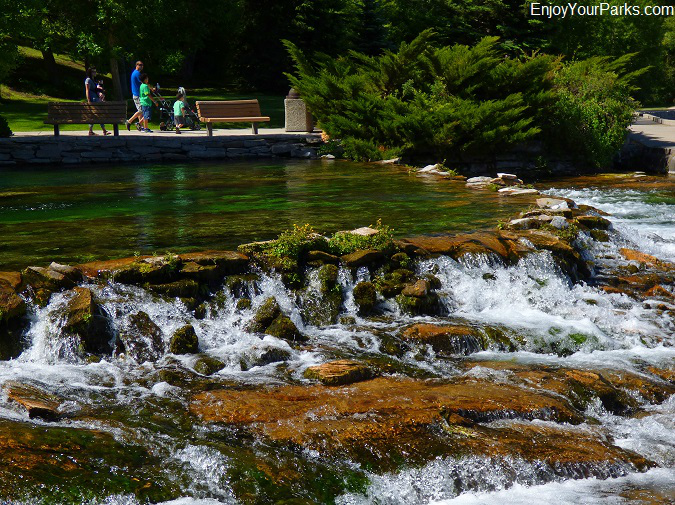 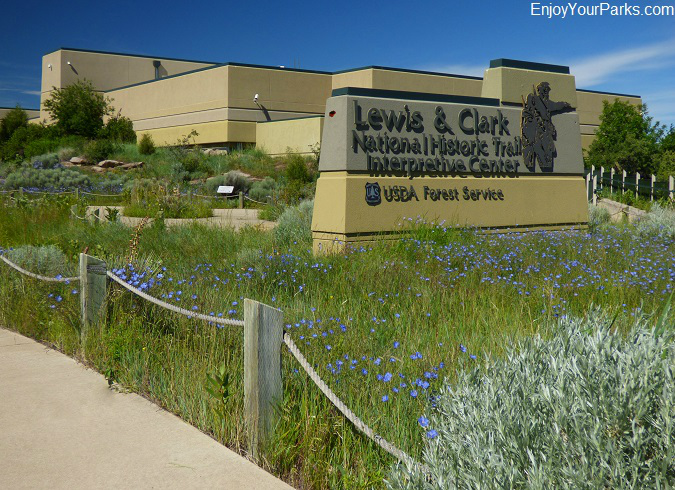 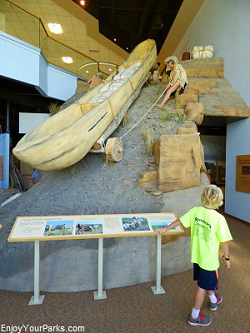 Lewis and Clark faced one their most difficult challenges of their entire expedition in the Great Falls area. This was where the Great Falls of the Missouri River is located, which included a 21 mile stretch of treacherous falls and rapids.  To get past these obstacles, EVERYTHING had to be carried either by hand or by make-shift wagons for over 18 extremely difficult miles.  This included all of their supplies, canoes and equipment.  The heat was nearly unbearable, and the prickly pear cactus would cut through the men's moccasins.  There were also grizzly bears and rattlesnakes along the banks of the river that gave them considerable trouble during this remarkable and historic portage.

The following is a excerpt from the Lewis & Clark journal describing the difficult 18 mile portage:
. . . They are obliged to halt and rest frequently for a few minute. At every halt these poor fellow tumble down and are so much fortiegued that many of them are asleep in an instant. In short their fatiegues are incredible; some are limping from the soreness of their feet, others faint and unable to stand for a few minutes, with heat and fatiegue, yet no one complains. All go with cheerfulness . . .

Every single member of the Lewis & Clark Expedition were indeed brave American heroes, and it seems quite fitting that this location was chosen for the Lewis & Clark National Historic Trail Interpretive Center due to what they had to endure without a single complaint. Managed by the USDA Forest Service, this gorgeous 25,000 square-foot building includes a fantastic exhibit hall that is extremely interesting  and very much worth the time to explore.  There is also a 160 seat theater, and educational center and a gift shop. 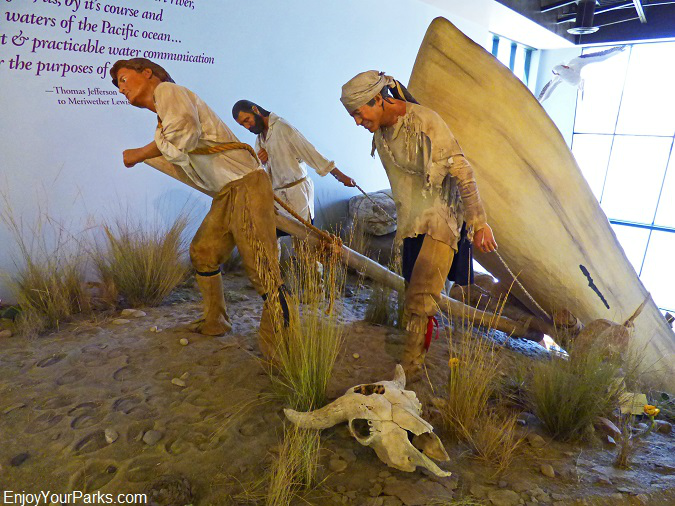 This is but one of the many outstanding exhibits at the Lewis & Clark Interpretive Center. 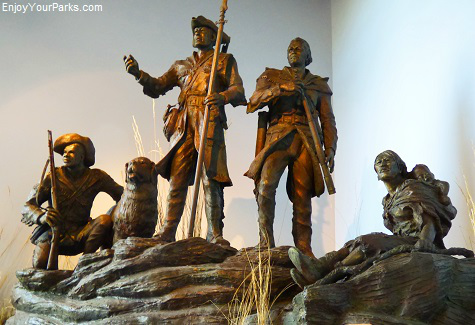 The following is the mission statement of the Lewis & Clark Interpretive Center:
"The Lewis and Clark National Historic Trail Interpretive Center imparts to the public a personal sense of President Thomas Jefferson's vision of expanding America to the west; it inspires awe and awakens curiosity toward the challenges faced by the expedition as they portaged the great falls of the Missouri River and explored the 'unknown'; brings to life the daily experiences of the expedition and the environment and native peoples of the 'uncharted West'; and celebrates the indomitable spirit of human discovery we all share."

The bottom line is this: If you want to learn more about the Lewis and Clark Expedition, and wish to somewhat gain an understanding of what these incredibly brave souls endured, and to grasp the importance of this historic trek that changed the world, we highly recommend that you take the time to visit this world-class Visitor Center.  You and your family will be very glad you did.

Click Here for a Google Map Location of the Interpretive Center 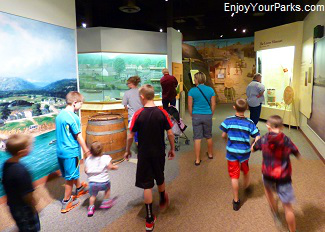 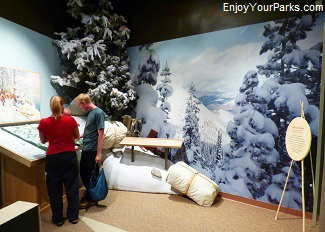 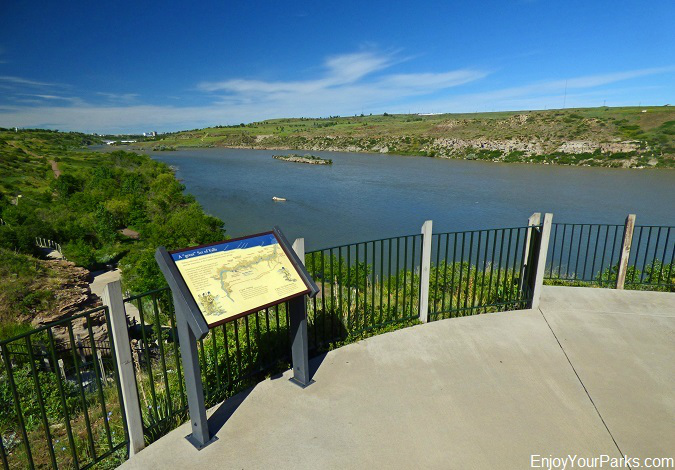 The Lewis & Clark National Historic Trail Interpretive Center rests along the banks of the Missouri River, and there are several wonderful overlooks at the Center that you can get a great view of this famous river. 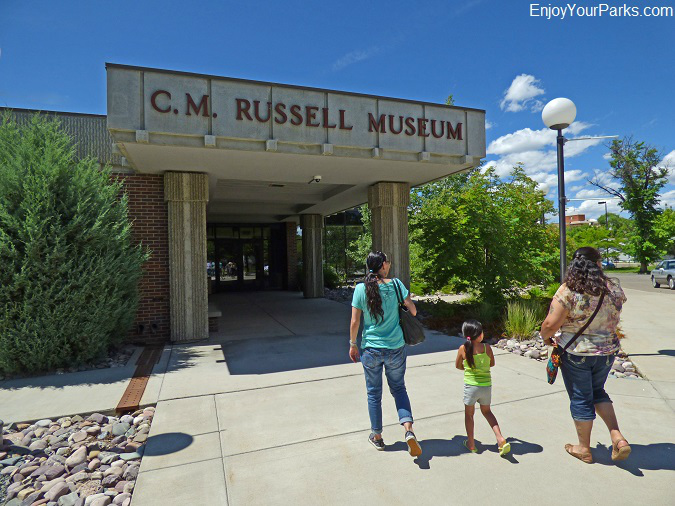 The C.M. Russell Museum Complex is without question one of the finest museums of American Western Art in the United States, and is home to the most complete collection of art and memorabilia of the iconic western artist Charles M. Russell found anywhere in the world.  Located in the heart of Great Falls Montana, this remarkable museum is an extremely popular tourist destination for visitors vacationing in Montana, and very much enjoyed by all who visit this national treasure.  There are over 2,000 Russell artworks, artifacts and personal items housed in this extraordinary museum.

About Charles M. Russell
Known as "The Cowboy Artist", Charles Marion Russell was born on March 19, 1864, and became one of the most talented, most famous and most celebrated artists of the Old American West.  Russell is also
regarded as one of the most treasured artists in American History, and his work is world-renowned.  C.M. Russell created more than 2,000 paintings of Indians, cowboys, western landscapes and wildlife.  His legendary art included water colors, oils, bronzes and sketches.  Even though C.M. Russell is mainly known for his artwork, he was also a prolific author and western storyteller.

Charles Marion Russell grew up in Missouri, and came to Montana when is was 16 years old.  He first worked on a sheep ranch, and this proved to be an unsuccessful career choice.  He then found work with a trapper/hunter who turned rancher by the name of Jake Hoover, who owned the O-H Ranch in Central Montana's Judith Basin. This is where Charles M. Russell learned about the ways of the Great American West.  Jake Hoover and Charles Russell remained lifelong friends, and aside from a brief visit to his Missouri family in 1882, he remained in Montana for the rest of his life.

The Discovery of "The Cowboy Artist"
When C.M. Russell was working as a ranch hand on the O-H cattle ranch in the Judith Basin of Central Montana, there was the infamously harsh winter of 1886-1887.  The ranch foreman received a letter from the owner of the ranch that asked how the cattle herd was weathering the horrific winter.  Instead of replying with a letter, the ranch foreman sent a post-card sized watercolor that Russell had painted.  It was of a starving steer that was basically skin and bones, being watched by wolves under a grey, ominous sky.  The caption on the sketch simply said, "Waiting for a Chinook. Last of the Five Thousand". The owner of the ranch was extremely impressed with the artwork, and showed it to his friends.  He then displayed it in a store window in the town of Helena Montana.  This ignited the public awareness of the skillful eyes and hand of "The Cowboy Artist", and marked the beginning of his career.

Photographs are not allowed to be taken anywhere within the C.M. Russell Museum, and it would prove to be a horribly unsuccessful effort if we attempted to even remotely describe Russell's work.  You really have to see it to believe it, and to understand just how significant his work is with regard to the fabric of America.  The detail is remarkably perfect, but far beyond that, it's the "feeling" that you get when you stare upon his paintings and sculptures.  He captured the Great American West like no other artist, and the C. M. Russell Museum is a extraordinary "treasure chest" that houses this unbelievable artistry.

The museum complex covers a city block, and is over 70,000 square feet in size.  This immense complex also houses Russell's original log studio and home, which are both designated National Historic Landmarks.  Accredited by the American Alliance of Museums, the C.M. Russell Museum is one of Montana's top attractions. 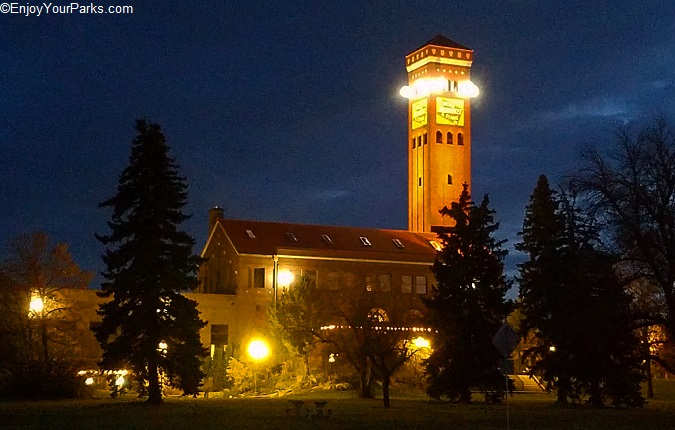 Great Falls Montana has a fascinating and colorful history.  Reminders of this amazing past are many iconic historic buildings that have been preserved for the ages.  So if you enjoy interesting Western history, we highly recommend that you visit the Great Falls Historic District. 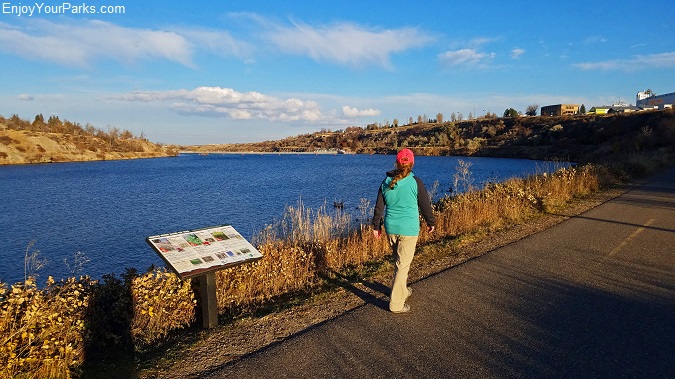 "The River Trail" in Great Falls Montana takes you along the banks of the Missouri River.

Great Falls, Montana lies along the legendary Missouri River, and there is a fantastic 15 mile trail system (mostly paved) along this iconic river.  Known as "The River Trail", this trail along the banks of the Missouri River is very scenic and enjoyable. 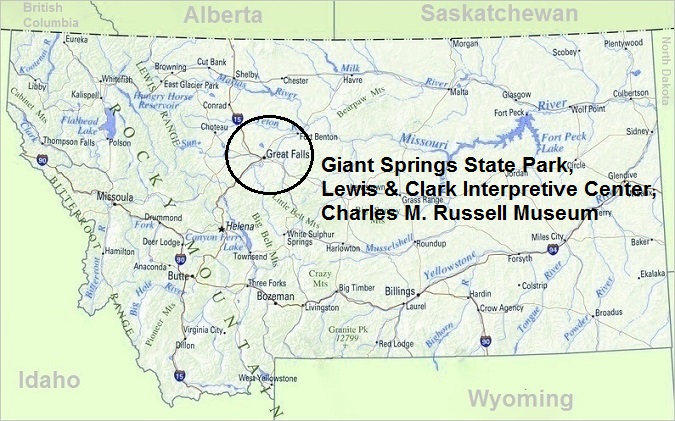 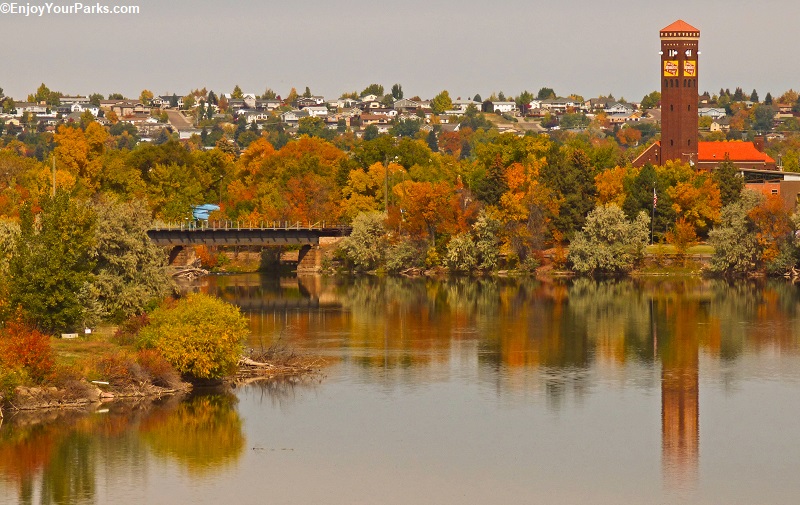 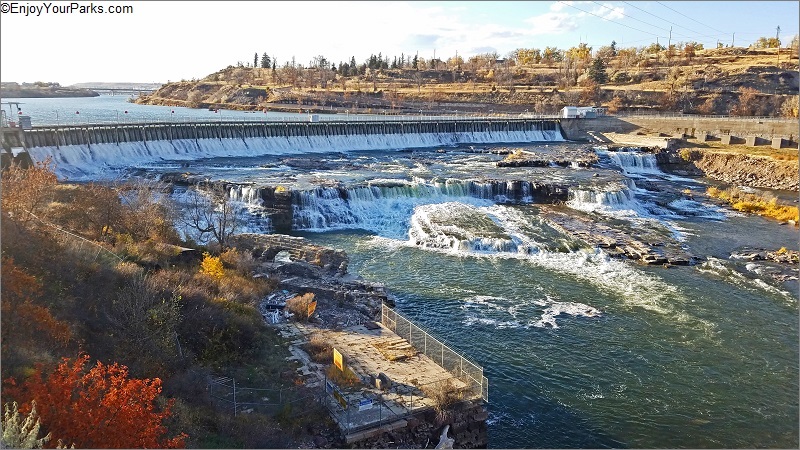