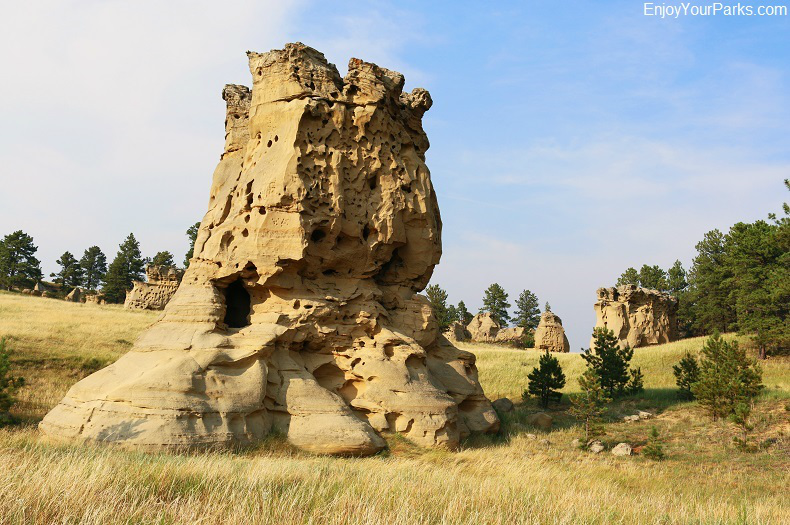 "As fantastically beautiful a place I have ever seen!" 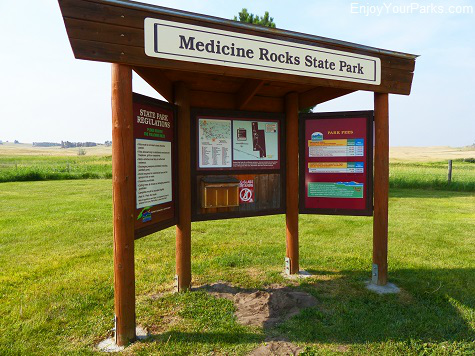 Medicine Rocks State Park in the southeastern corner of Montana is named for the many sandstone pillars that jut out of the eastern Montana prairie.  These pillars, some being over 80 feet tall, have a "swiss cheese" appearance,  and contain tunnels and holes throughout the rock.

These strange pillars appear to be not of this world... like something you might see on another planet or a magical place that is not of this earth.   As you walk through this "other-worldly" place, you will see caves, pillars, holes, spires, arches, flat-topped towers and columns, all made of solid sandstone that seem to be have placed onto the prairie by supernatural means. There are over 100 rock formations in the Medicine Rocks State Park, all of different and unique shapes and sizes.

Many of the rocks have examples of Native American rock art, where some are dated to be hundreds of years old.  These incredibly unique rock pillars are considered to be a sacred holy place by Northern Plains Indians, and has served as a gathering place for the Northern Plains Indians for  at least 11,000 years.  This 330 acre park is extremely fascinating and well worth the time to explore and discover while you're in the eastern part of Montana during your vacation. 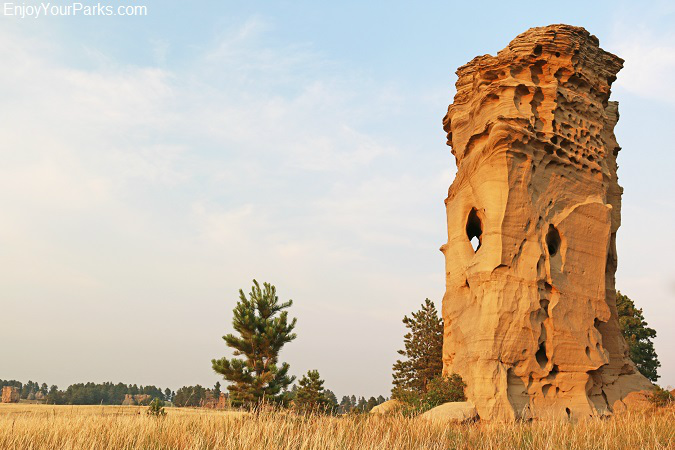 Some of the towers at Medicine Rocks State Park in Montana are over 80 feet high! 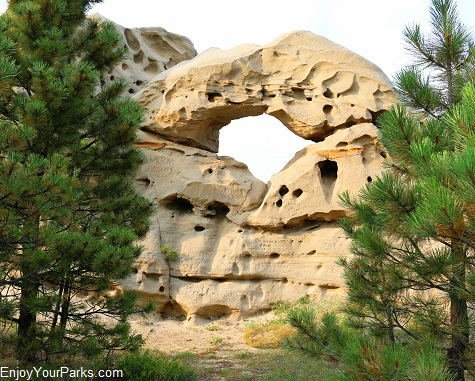 Archaeologists have found evidence that humans have been visiting the Medicine Rocks for 11,000 years. Northern Plains Indians came to this site not only because of the "unworldly" appearance of the rock formations, but also because of the numerous plants that grew in the area that were used for medicinal purposes.

Many different Indian tribes frequented Medicine Rocks throughout the ages.

The Cheyenne Indians of the Black Hills area of today's South Dakota, would visit the Medicine Rocks every spring and fall on their way to and from the Yellowstone River. Other tribes include Assiniboine, Sioux, Mandan, Souix, Crow, A'aninin, Hidatsa and Arikara.

"Little People"
For 11,000 years or more, Native Americans have been frequenting this special place in the eastern Montana prairie.  The Crow Indians named the Medicine Rocks area "Inyan-oka-lo-ka", which means "rock with a hole in it." And each year, the Crow Indians would make an offering to a race of miniature people they called "Little People".  These tiny people is believed by the Crow to be a race of people that were not only very small in size, but were spiritually powerful and quite ferocious.  The Crow Indians would leave these tiny dwarves gifts such as paint, tobacco, and beads.  The Crow would also make "fasting beds" out of the stones, and would fast until they would experience visions.   All of the Northern Plains tribes considered Medicine Rocks to be holy grounds.

"Where the spirits stayed and medicine men played."

Archaeologists have found many artifacts throughout the years, such as teepee rings, pottery, stone tools, bone tools, beads and arrowheads, but the most fascinating findings are the art rock created by the Northern Plains Indians over the thousands of years. 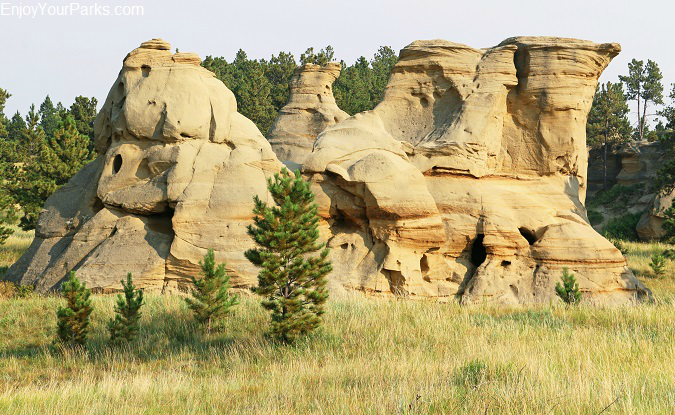 There are over 100 different sandstone formations located in Medicine Rocks State Park. 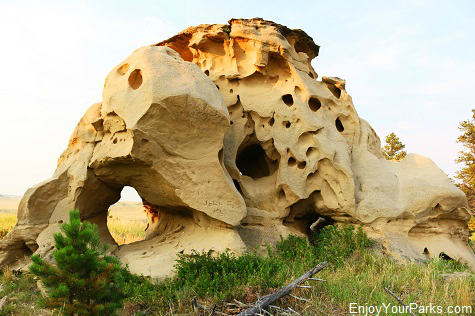 European-Americans first moved into the Medicine Rocks area during the 1880s during the cattle ranching era.

The Standard Cattle Company then founded the "101 Ranch" in 1888, and moved over 35,000 head of cattle each and every from Wyoming to a cattle shipping hub for the Northern Pacific Railroad that was located at Wibaux, Montana.

There were hundreds of cowboys that worked this massive ranch, and many of these cowboys carved their names and other graffiti into the Medicine Rocks while working in the area. 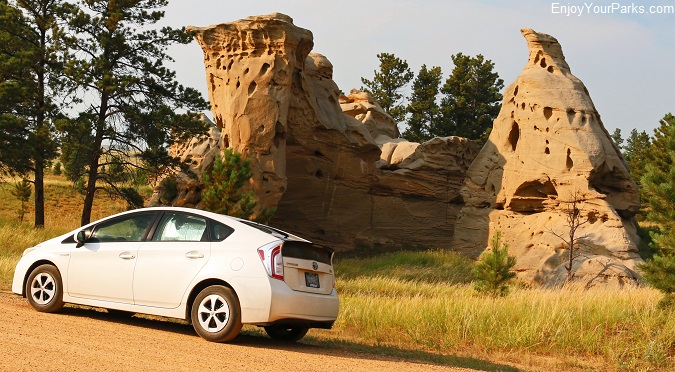 There is a nicely maintained gravel road that takes visitors through this amazing park. 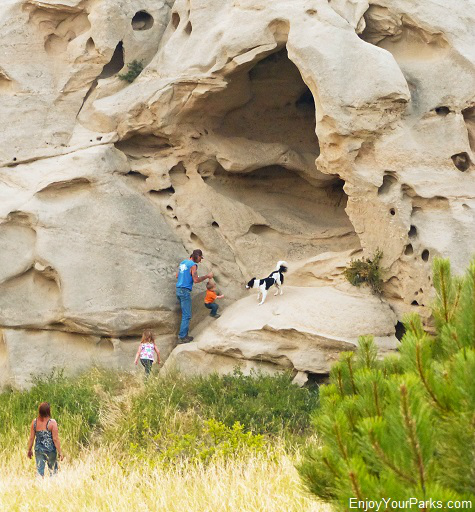 The sandstone that the Medicine Rocks are composed of are of the Fort Union Sandstone Formation that is approximately 61 million years old during the Tertiary Era.

A freshwater river crossed this area and flowed into a prehistoric sea located near the border of today's South Dakota. The river deposited fine grains of sand, which eventually became sand dunes.

This erosion is still occurring today, and the result is what you see during your time at this magical place.  All of the caves, columns, pillars, flat-topped towers, holes, arches and spires are all "on display" for you to enjoy.  And by the way, some of the fossils found by geologists were of snakes, and of teeth from an early primate-like mammal by the name of "Plesiadapis Anceps".  Another fossil of ancient primitive mammal called "Baiotomeus" was found at Medicine Rocks in the mid 1930s.  This amazing park is indeed a rare and fascinating treasure. 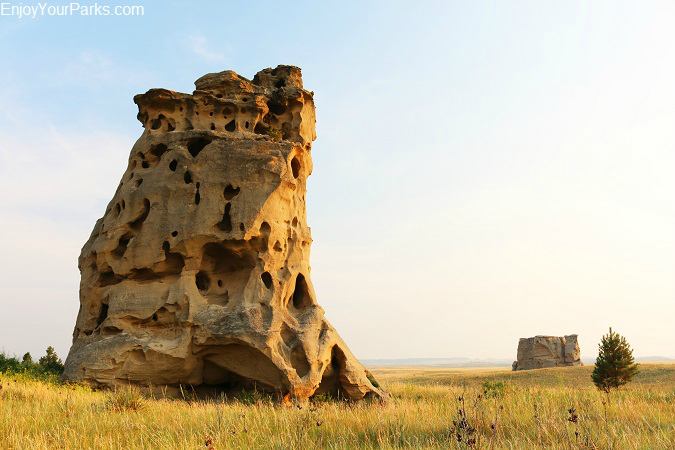 Stone towers rise over 80 feet straight up out of the prairie at Medicine Rocks State Park. 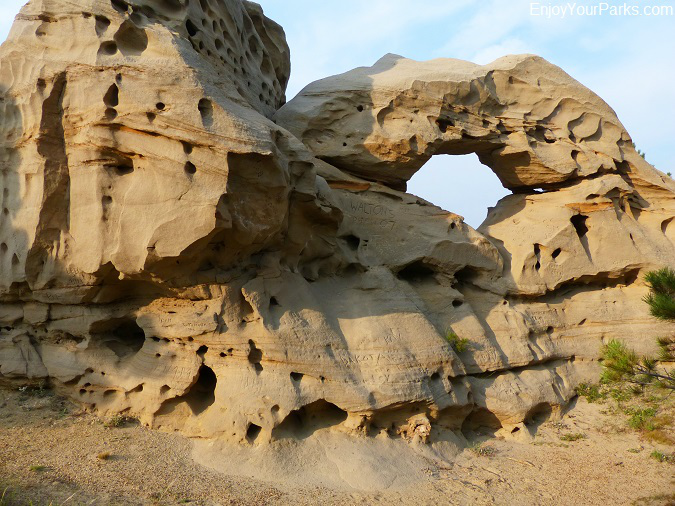 Millions of years of erosion has created incredibly bizarre and strange formations throughout the park. 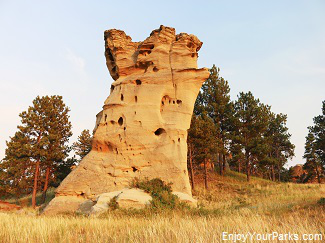 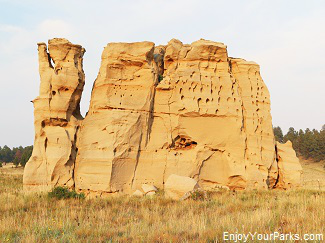 Medicine Rocks State Park has 330 acres of incredible rock formations for you to discover and enjoy. 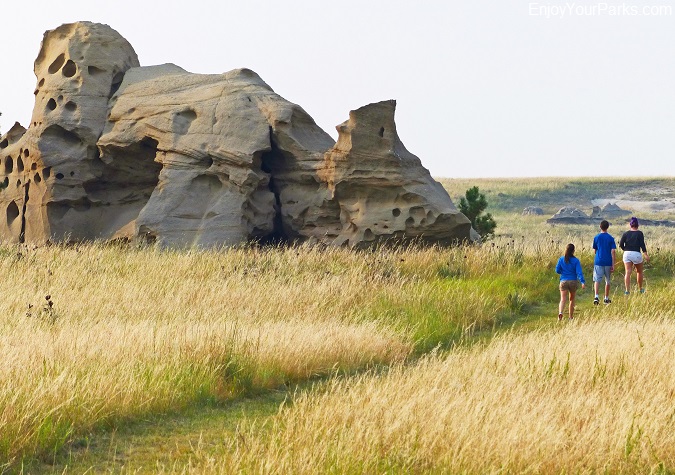 We highly recommend that you take the short and pleasant hiking trails to see many of the formations that are not visible from the road.

There are several hiking trails that take visitors to many of the sandstone formations that are not located directly beside the road.  If you're able, we highly recommend that you take these short, pleasant trails as you will see some remarkable towers and other formations that you cannot see from the road. 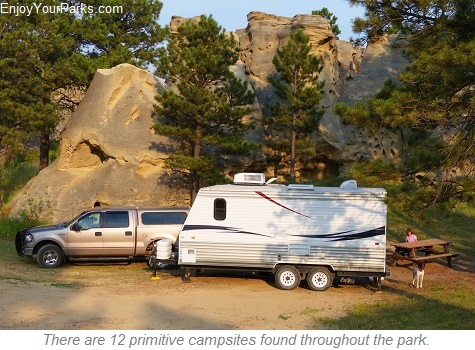 Medicine Rocks State Park is open all year round. Located about 25 miles southwest of Baker, Montana and 11 miles north of Ekalaka, Montana on State Route 7.

There is a well maintained gravel road that takes you from State Route 7 to the actual park.

There are 12 primitive campsites available, as well as tables, vault toilets, fire rings and a hand pump for potable water.  Visitors are asked to "Pack-It-In-Pack-It-Out", as there are no garbage facilities in the park.  If you like camping, you're really enjoy the experience of spending the night in this "supernatural" place! 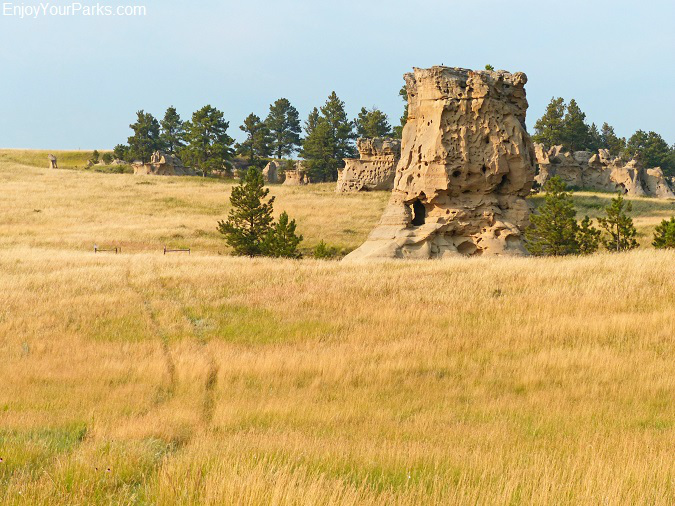 Medicine Rocks State Park is a "must see" while you're in Eastern Montana during your vacation. 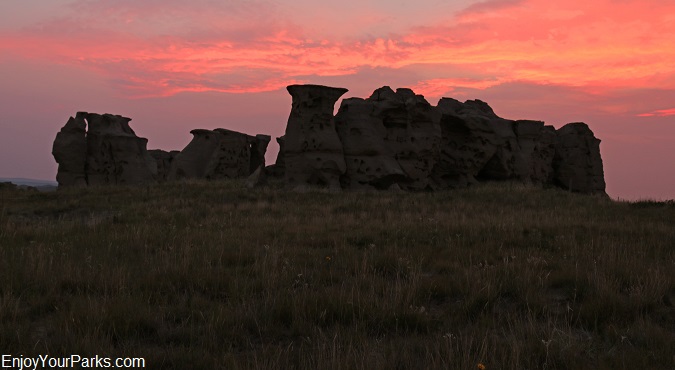 Top Things To Do In Montana: Medicine Rocks State Park 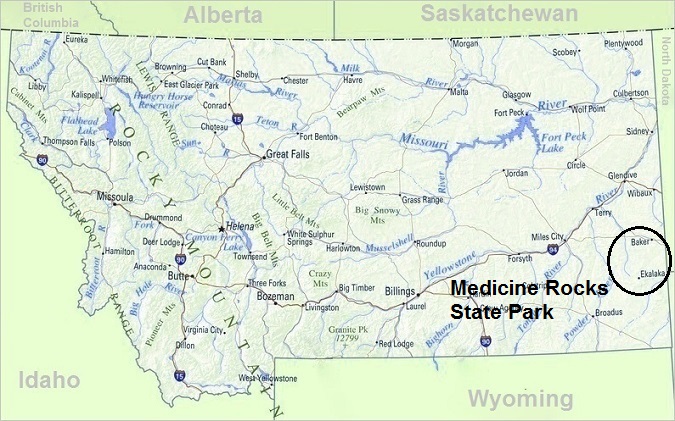